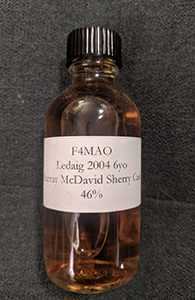 On Monday Michael K. (of Diving for Pearls) and I disagreed a bit about the new Lagavulin 11, Offerman Edition. While he found it to be a sweeter, gentler, just good Lagavulin, I found it to be decidedly non-training wheels Lagavulin and very good. Today we’re going to try again with another simul-review. This is also of a heavily peated whisky from an island distillery. This time, however, the island is Mull, the distillery is Tobermory, the whisky is much younger, and the cask is sherry. I’m not sure what was going on with the Murray McDavid braintrust in 2010 that they didn’t feel the need to throw this into a grenache cask for 2 months—a loss of nerve? At least I think this was a full-term maturation: the source of my sample, Florin (the inventor of avocado toast) did not specify. At any rate, 6 years is pretty young (just three years older than the minimum maturation needed for Scotch whisky)—will the sherry have smoothed any rough notes of youth? Let’s see.

Nose: Very nice, rich notes of sherried peat with inky phenolic notes mingling with meaty and fruity (orange peel) sherry notes. Does not nose like an immature 6 yo at all. A little sweeter as it sits. Less smoke, more citrus with water.

Palate: Leads with ashy smoke on the palate, turning more acidic as I swallow. Very nice texture at 46%. Much saltier on the second sip and there’s a slightly acrid note of smouldering leaves in the smoke now along with some lemon peel. Not too much change with time. Let’s see what water does. Hmm it pushes the smoke back and makes it sharper; the whole is now more acidic. Gets sharper still as it sits (the mouth-furring kind).

Finish: Long. The ashy smoke picks up some chalk and some pepper and it all keeps going for a while; some pipe tobacco pops out at the end. As on the palate with water.

Comments: This was a pleasant surprise. I liked it a lot neat—where it belied its age; less so with water—though I have to say that even with water it didn’t have any of the raw notes that often creep into younger malts.

And here is Michael’s review. This one he liked a little more than I did, but we got very similar notes from it.