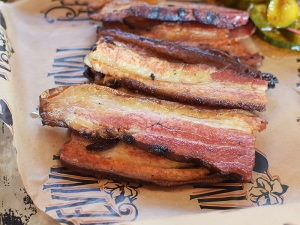 We visited Keg and Case in March and again in September, both times to eat dinner at In Bloom (reviews here and here). On both occasions we walked by all the other food businesses without paying very close attention to them and on both occasions we resolved to come back soon with the kids for lunch and try some of them. Well, at the end of October we finally got around to doing that. We met friends there for an early lunch on a Saturday. Our main targets were Pimento, a Jamaican counter (and a branch of a more formal restaurant in Minneapolis) and Revival Smoked Meats, an outpost of the Revival empire. We did eat and drink the wares of a few other merchants as well (doughnuts, ice cream, beer, coffee) and after lunch we sauntered around the rest of the complex. I have descriptions and evaluations for you of the things we ate and pictures of everything else.

Food halls—which seem to be mushrooming in every major city now—are a somewhat controversial part of the American food landscape. One of the hallmarks seemingly of gentrification, it’s not clear if food halls of the Keg and Case variety—as opposed to food courts in malls or shopping centers such as Hmongtown Marketplace or Hmong Village—are representative community spaces or even necessarily good ideas for all the businesses that open in them: rents can be high and margins narrow. I have no idea if the latter problem applies at Keg and Case but it is certainly the case that this is an upscale food hall. It’s not very large and of all the food counters we saw only one could perhaps be described as relatively inexpensive for the genre and that not by much.

If In Bloom is the major anchor of the space, the other big name in the building is Revival, whose Smoked Meats counter offers an abbreviated version of their greatest hits—though there is no fried chicken. There are only two other counters where substantial meals can be had: a place called O’Cheeze which offers various dishes based on…wait for it, wait for it… cheese; and Pimento, the aforementioned purveyor of Jamaican foods. We passed on O’Cheeze and focused on the other two.

From Pimento we got an order of the boneless jerk chicken (quite good) and an order of the braised oxtail (very good). Well, I should say we ordered the goat curry and were given the braised oxtail and decided to just eat it. We also got an order of their coco bread (milk bread with coconut milk) to sop up the curries (there was also rice and slaw that came with them). We got their two hottest sauces with the meat dishes but neither was unmanageably hot. Finally, an order of their spiced beef patties (excellent and a very generous portion at two large turnovers for $4; unless, that is, we were given two by mistake). All of this came to $40 before tip. Not cheap but a decent amount of food—three adults could probably have split it and been happy.

Revival Smoked Meats, on the other hand, was a much more expensive proposition. We got some of their brisket, some of their pork shoulder, some of their bacon (crisp thick-cut pork belly) plus a bunch of sides and it came to about $76. This was definitely not good value, especially considering that both the brisket and the pork shoulder were just about acceptable. The bacon, on the other hand, was excellent, and the sides were pretty good—I really like their pickles, by the way.

By way of sweets, a doughnut from Bogart’s Doughnut Co. and a scoop of ice cream from Sweet Science Ice Cream. They have a large menu and the boys got one of the seasonal specials: caramel apple cider crisp. The ice cream was fine; it was also $5.50 for a single scoop before tax/tip. I also tried a couple of small samples at the halva counter but could not bring myself to pay $8 for a small piece. There is also a cotton candy stand and I can only thank my many-armed gods for the fact that we happened on it after the ice cream had been eaten, thus allowing us to escape uncovered in sticky sugar. Next to the cotton candy vendor is the one reasonably priced counter: Bread & Boba. I’m not sure how large or good their banh mi is but most are below $7. Sure that’s more than you will pay for banh mi at many places on University Ave. but in Keg and Case it seems like a deal.

Take a look at this mega slideshow and scroll down for my thoughts on the experience as a whole and whether we’d go back and to see what’s coming next. 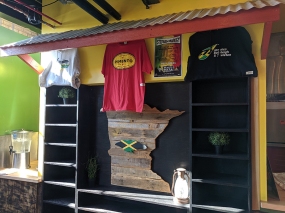 We tried the two hottest options. The “Kill Dem Wit It” was hot but not unmanageably so; the “Kingston Kick” would only bother very Minnesotan palates. 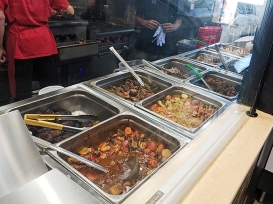 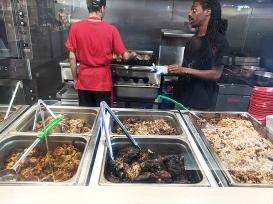 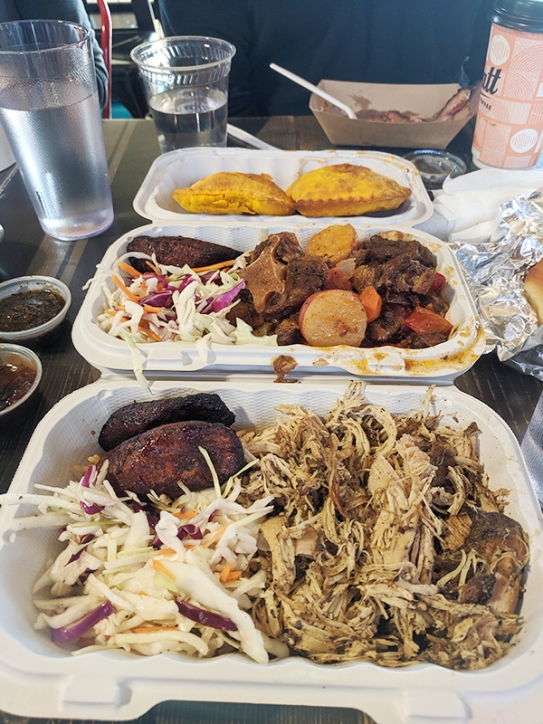 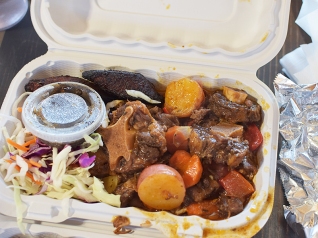 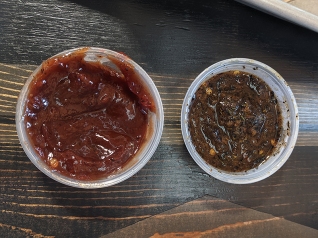 The darker one is the hotter one. 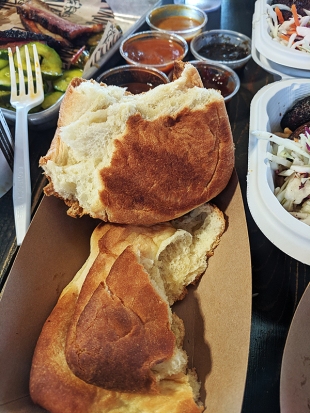 I could go for these again today… 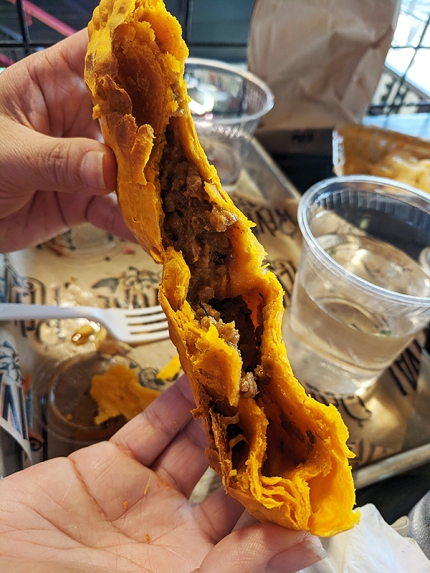 This is their seating area; I guess in the summers they have patio seating as well? 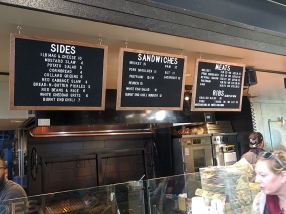 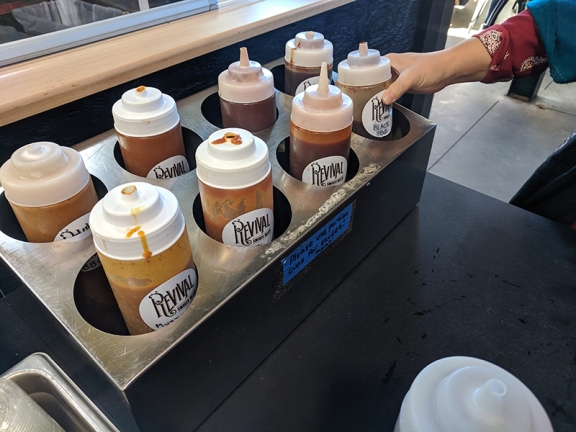 Those pickles are really good.

The brisket was a bit too dry. 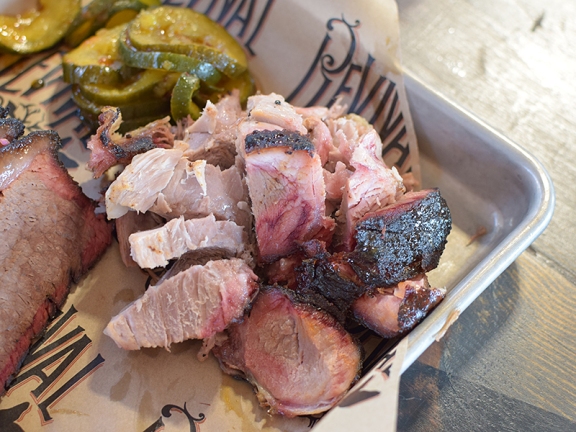 Though not as dry as the pork shoulder.

The bacon, however, was excellent. 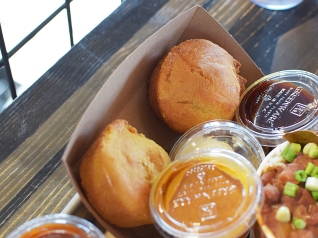 A bit on the dry side. 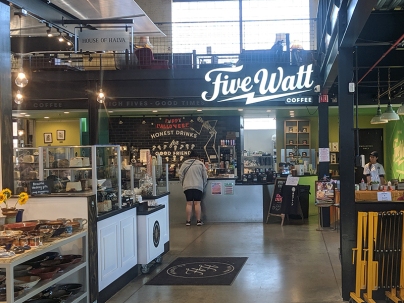 This was devoured by the young people. 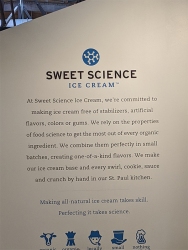 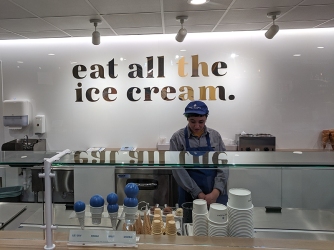 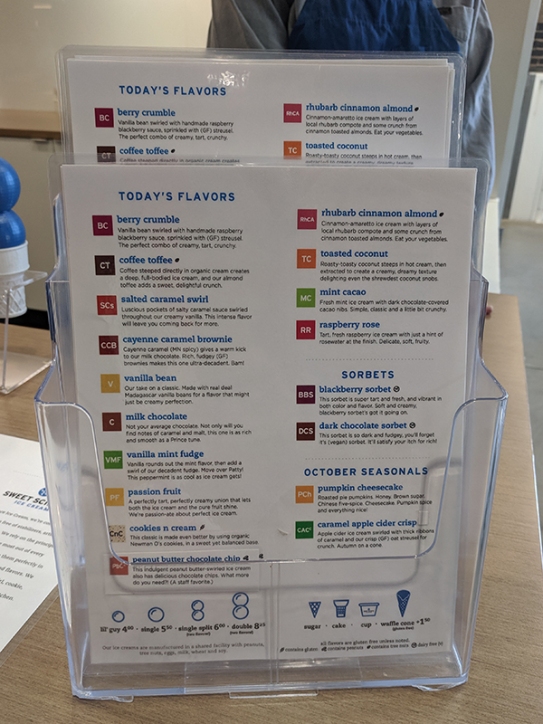 Are a lot of people really going to be shelling out for expensive ice cream in the dead of winter? 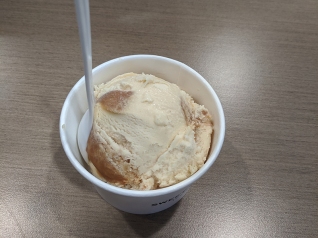 If I’d noticed this place before we ate I would have got a banh mi to try. Has anyone else tried it?

Prices are not too bad.

This place was getting a decent amount of traction. 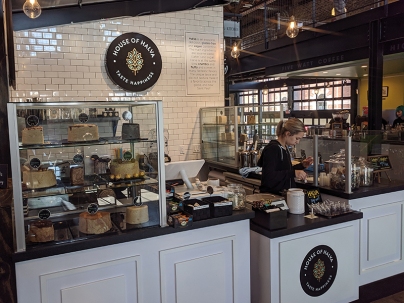 The halva counter not so much. We know people who swear by them though so they must be popular. 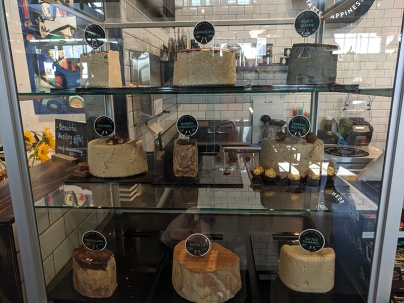 Many different kinds. There was a whisky flavoured one I liked the small taste of but not enough to pay the high price. 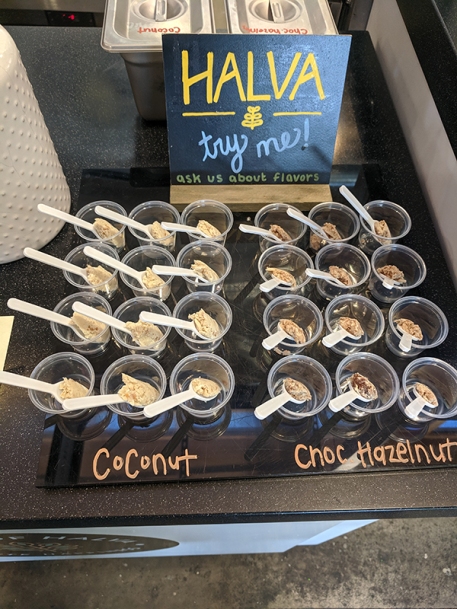 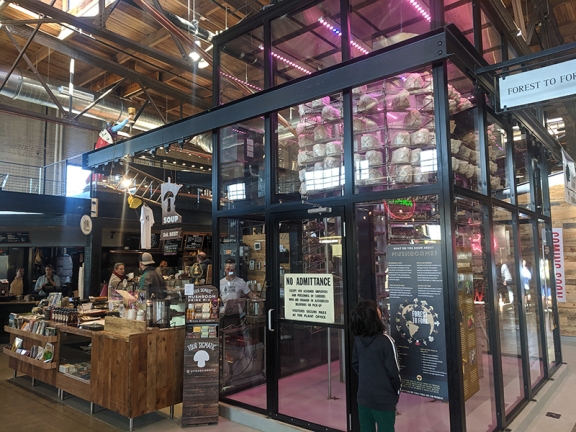 Do they grow all their mushrooms in there? 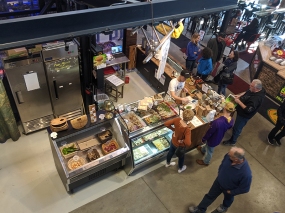 The shop counter part, photographed from above.

Whenever we’re there next I’ll buy some sausage. 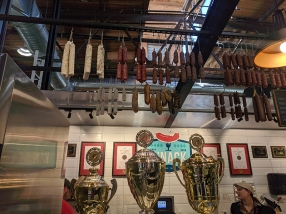 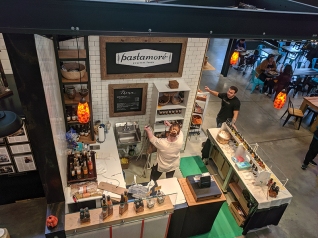 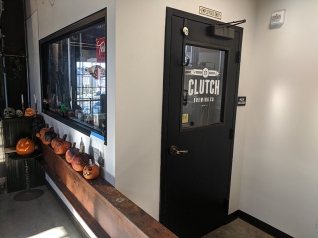 Who is this supposed to be?

I assume the bar is connected to the brewery. 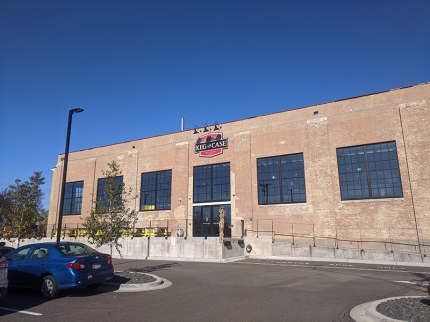 On the non-prepared food front I was intrigued by K’Nack, the sausage and salumi vendor. The mushroom place is a trip but prices are high (though not out of keeping with prices in general for fancy mushrooms). The place selling pastas and vinegars didn’t excite me much.

So, would we go back just to eat? The problem with the Keg and Case food hall for us is a) that there isn’t very much there and b) most of what’s there is not compelling enough to us for a return visit anytime soon. While the food at Pimento was good the only thing that stood out was the spiced beef patties. These were excellent and if I were ever in range of Keg and Case and looking for a quick bite that would be my pick. As for Revival, though the bacon was excellent we’d much rather go back to eat at Revival, St. Paul, where the fried chicken is available.

As for the rest, living as we do in the hamlets of Southern Minnesota I’m not sure why we’d ever drive up to Keg and Case to drink at the microbrewery they have on site or choose to go there rather than any number of Vietnamese places on University Ave. for banh mi. Now if there were a larger number of enticing food options it would be possible to go and pick and choose and put an interesting group order together but as it is we’re in no hurry to go back. I should also say on the subject of putting together an order from the various vendors that rules I don’t quite understand prevent diners from bringing food from one vendor to the seating area of another. So if you’re eating things from multiple vendors you have to go to the upstairs seating—at least this was my understanding. And if you’re drinking beer from the brewery bar upstairs you can’t bring it down at all.

Frankly, if you’re looking to do some food shopping and eating I can’t think of any reason to pick Keg and Case over the far superior selection in all categories at the Midtown Global Market. That reminds me, we have to remember to go check out Ziadi’s Mediterranean Cuisine there—we loved our meal at their Moroccan Flavors counter (which is still there) and I’m curious to see what the more formal restaurant is like. Maybe in December? Up next from the Twin Cities, returns to Tenant and Hyacinth. Before all of that though I’ll have my last report from our New York trip in August.