Well, it has been just over three months now since we left Goa. In the normal course of events I would have wrapped up my meal reviews from there in March. But when the pandemic hit I wasn’t very motivated to write about meals that no one reading my posts would be able to go eat for god knows how long. Now that we’re into the second month of the “stay at home” order in Minnesota, however, with no idea when we’ll ever go out to eat again, I’m looking back longingly at the last time when eating out was almost all the eating we were doing and at what will turn out to have been our last family vacation for a long, long time. And so here is a brief account of our last meal out in Goa, the day before we left. It is of lunch at Star Light, an unfussy restaurant located in Assolna, about halfway between where we were staying in Velim and Cavelossim Beach, where we spent most of our waking hours. In fact we ate here after spending the morning one last time at Cavelossim and right before our visit to the Paul John distillery.

The restaurant is located right by the Sal river on a dusty road that features a number of other restaurants that look like it. It’s an older restaurant. It originally bore the owner’s nickname and was called Pussie’s but at some point in the past someone must have pointed out that with the Western tourist trade a less giggle-inducing name was needed and they went with Star Light (also rendered as Starlight in some parts of the signage and as Starlite on the bill). By any name, it’s a quintessential Goan place. That is to say, it is relaxed, bordering on informal and serves much the same menu as most other Goan restaurants located near tourist enclaves. That menu is a mix of North Indian, Indian Chinese, continental and Goan dishes.

As this was our last full day in Goa the Goan dishes were what we were most interested in—though the boys insisted as they did all through Goa on eating naans when available, as they were here. We got butter naans for them but also got a local variant for ourselves: a Goan sausage naan or a naan stuffed with spicy crumbled Goan sausage fry. It was rather nice and would have been even nicer with a chilled beer. We’d started with rava/semolina-coated oysters for us and thinly-sliced beef tongue for the boys—they’d eaten tongue the previous day at Hog Worth and loved it and wanted it again. The tongue was very good, the oysters were just okay—the oysters themselves were rather small, leading to a very high batter to oyster ratio.

For the mains we got an order of the “chicken crispy”. We were expecting this to be similar to the excellent dry fried chicken that our neighbours had dropped off at dinner a few nights previous but what showed up turned out to be out of the Indian Chinese repertoire. Tasty enough but not what we were in the mood for. Thankfully, the ladyfish butter garlic we got as well was very good. We’d selected the fish from their “catch of the day” board and it was cooked well and presented attractively. To end the boys got ice cream and we split a large piece of caramel custard (think a more thickly set flan).

For a closer look at the space and the food, launch the slideshow below. Scroll down to see how much it all cost and for thoughts on the experience as a whole. 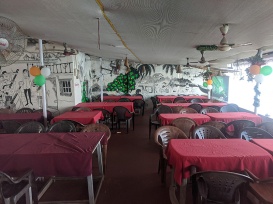 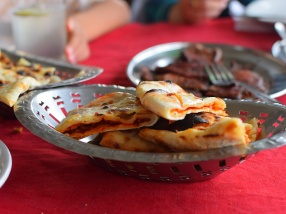 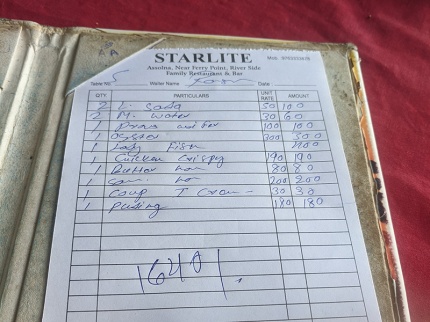 Service was friendly and present when needed. The total came to Rs. 1640 or just about $24 before tip. That’s a pretty good value even though the food was far from the best we had in South Goa. I’d take our meals at Martin’s Corner and especially at Fernando’s Nostalgia over this any time but those are also much further out. If Cavelossim Beach is your main base of operations, Star Light or one of the other seafood restaurants like it is a good call. You’ll certainly eat much better than you will at the beach shacks. And I’d guess that at dinner, when it is full and when there is likely to be music it will probably be an even better experience.

Okay, one more Goa report to come. That will encompass our dinner not too long after arrival on our first day and the breakfast, lunch and snacks we ate at a couple of beach shacks at Cavelossim Beach over the ensuing week. I may even throw some beach pictures in there as well. That will be next week.