More than four months after we left, here, finally, is my farewell to Goa. We spent a week there, living in the lovely home of old friends who now live in Hong Kong and it was one of the best vacations we’ve had as a family. It seems a world and two lifetimes away now but I see my other trip reports and look back with pleasure at our time there—hanging out at the beach every day, eating (mostly) very good Goan food both in restaurants and at home, visiting the local fish market, visiting old Portuguese cathedrals, touring the Paul John distillery etc. It was a charmed week and I don’t know when we will ever be able to do it again. END_OF_DOCUMENT_TOKEN_TO_BE_REPLACED

Almost exactly four months to the day that we arrived in Goa for a week’s holiday, here is a brief account of our first meal there. We were staying at the beautiful home of old friends (they weren’t there) in Velim in South Goa. South Goa has far less tourist traffic than North Goa does and so is far less hectic. By the same token there are fewer quality restaurants in the larger area, and in a small, sleepy village like Velim there are none. For the rest of the stay all our dinners would be at the house; but as we’d arrived in the evening of the first day it hadn’t been possible to get set up with the cook we’d made arrangements with in the village. I’d looked around before arrival to see what the options were that wouldn’t require us to drive another 30 minutes back in the direction of the airport and we settled on the outpost of The Fisherman’s Wharf in Cavelossim, not too far from the beach on which we would spend the majority of every day following. The Fisherman’s Wharf is a chain with a few locations in Goa and they’ve expanded as well to Bangalore and Hyderabad. We didn’t have any particular expectations but it turned out to be a decent meal on the whole, if nothing very exciting. Indeed, this meal included a few items that we consumed pretty much every day for the rest of the trip. END_OF_DOCUMENT_TOKEN_TO_BE_REPLACED 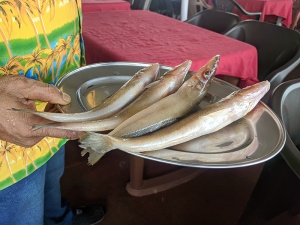 Well, it has been just over three months now since we left Goa. In the normal course of events I would have wrapped up my meal reviews from there in March. But when the pandemic hit I wasn’t very motivated to write about meals that no one reading my posts would be able to go eat for god knows how long. Now that we’re into the second month of the “stay at home” order in Minnesota, however, with no idea when we’ll ever go out to eat again, I’m looking back longingly at the last time when eating out was almost all the eating we were doing and at what will turn out to have been our last family vacation for a long, long time. And so here is a brief account of our last meal out in Goa, the day before we left. It is of lunch at Star Light, an unfussy restaurant located in Assolna, about halfway between where we were staying in Velim and Cavelossim Beach, where we spent most of our waking hours. In fact we ate here after spending the morning one last time at Cavelossim and right before our visit to the Paul John distillery. END_OF_DOCUMENT_TOKEN_TO_BE_REPLACED

After a shaky start at our first lunch on the beach (more on this later), we had our fourth very good lunch in a row at Hog Worth. I’ve already posted write-ups of the three previous: at Martin’s Corner, Palácio Do Deão, and Fernando’s Nostalgia. Unlike those three places, Hog Worth is not located in South Goa. It is located in Panjim, the capital of the state. This was another restaurant recommended by Vikram D. (who’d also recommended Fenando’s Nostalgia) and after the previous day’s experience we were looking forward to a meal there after a spot of tourism at various cathedrals. It did not disappoint. END_OF_DOCUMENT_TOKEN_TO_BE_REPLACED

The day after our visit to Palácio Do Deão we once again spent most of our day at Cavelossim Beach (okay, so that was true of every day we spent in Goa but one). In the middle of the day, however, we took a break from the beach and drove up about 30 minutes to the village of Raia. We made the drive in order to eat at a celebrated restaurant, Fernando’s Nostalgia (or just Nostalgia). The Fernando in the name is Chef Fernando da Costa, who passed away in 2007, too young at the age of 56. The restaurant carries on, however, in his name and is still true to his vision: celebrating classic Goan Catholic food in its traditional avatar. END_OF_DOCUMENT_TOKEN_TO_BE_REPLACED

In my write-up last week of my visit to the Paul John distillery I suggested that visitors to North Goa might make a good day trip to the south by combining a visit to Paul John with a visit to the Palácio Do Deão in Quepem. Here now is a description of our visit there which may convince you that it is a good thing to do.

As you may know, Goa was a colony of Portugal till 1961 (Indian independence from Britain was in 1947). Portuguese presence in Goa goes back a long way—it was Vasco da Gama who found the sea route from Europe to India that Columbus had set off in search of. Unsurprisingly Portuguese cultural influence in Goa also runs deep. If Catholicism is one major expression of this influence, food is the other. And at the Palácio Do Deão you can get a sense of both. END_OF_DOCUMENT_TOKEN_TO_BE_REPLACED

As I’ve mentioned before, after two weeks in Delhi in January we went down to Goa for a week. Old college friends have a lovely home in South Goa that they opened up to us. Ten minutes from Cavelossim Beach and far, far away from tourist-intensive North Goa, this was as idyllic a family vacation as we could have hoped for—especially given how cold it was in Southern Minnesota at the time! We hired a cook from the village to cook breakfasts and dinners for us—the latter all centered on fish and shellfish I purchased from the local market (see my report on those shopping expeditions). Lunches, however, we ate out. Alas, our lunch on our first full day was not very good. Ignoring the warnings of far better informed people, we chose to eat at a shack at the beach. The food was marginal and the convenience of not having to leave the beach to eat it was not any consolation. We’d eaten dinner out as well a few hours after arrival the previous night, and while that had been a lot better than our beach shack lunch, it had not been any great shakes either. My dream of eating excellent Goan food twice a day was in danger of fizzling before our week even got properly underway—especially as miscommunication with our cook resulted in his preparing a debut dinner later that day that was centered mostly on sugar (I said, “put a pinch of sugar in the boys’ dal”, he proceeded to put a LOT of sugar into everything). Thankfully, everything was reset at lunch on our second full day. That lunch was at Martin’s Corner. We didn’t have a bad meal after that. END_OF_DOCUMENT_TOKEN_TO_BE_REPLACED 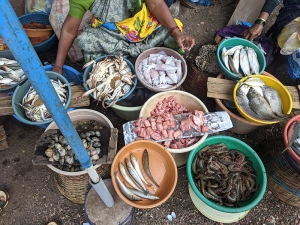 I still have a few restaurant reports to post from our two weeks in Delhi in the first half of January but I cannot resist first posting this gallery of images from what was one of my favourite outings during the following week we spent in Goa: shopping for fish/seafood at the local village market in Assolna in South Goa. We spent a week in the lovely home of old friends in the * village of Velim. We spent most of almost every single day there on the beach and ate lunches out. We hired a cook from the village to prepare our breakfasts and dinners (we were the only ones in the house). Quite apart from not wanting to spend too much of the day on cooking, this allowed us to eat Goan food twice a day, and in particular it allowed us to eat a lot of local fish and shellfish. END_OF_DOCUMENT_TOKEN_TO_BE_REPLACED