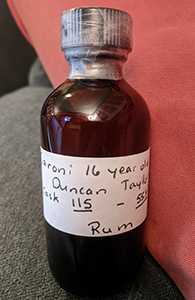 Nose: Brighter off the bat than cask 87 with less caramel and more citrus (orange peel, lemon). On the second sniff the citrus moves in the direction of marmalade and there are some notes of toffee and butterscotch as well; a faintly smoky note as well. Less oak here as well than in cask 87 and it’s less herbal—at least at the start. With more air and time the citrus is still here but it ‘s now hard candy rather than marmalade it calls to mind. A few drops of water make it sweeter and push the herbal notes back further.

Palate: As with the other cask, it comes in drier on the palate, bringing some herbal and vegetal notes as well—though again, it is less herbal than the sibling cask. Approachable at full strength. With time and a bit of air there’s some aniseed. As it sits the herbal notes expand along with a leafy, smoky quality (what I imagine charred dried leaves might taste like after you throw a bucket of water on them). With time the oak pops out earlier. Okay, let’s see what water does. It pushes the herbal/vegetal notes back here as well and brings out darker, richer notes (caramel).

Finish: Long. Nothing new here except the oak finally makes its presence known, getting spicier as it goes. Less spicy and sweeter at first (brown sugar) and then a touch bitter (burnt caramel).

Comments: Somewhat bourbonny on the nose to start and, on the whole, this would probably appeal to bourbon drinkers even more than cask 87 might. This is very good too but doesn’t quite have the complexity of the other.

Thanks to Michael for the sample.