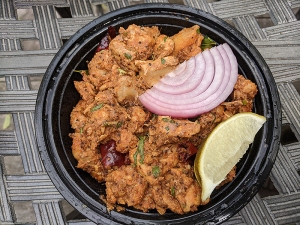 On Sunday I had a quick look at the India Spice House grocery store in Eden Prairie. We were in the general neighbourhood again for yet another walk in the excellent Hyland Lake park in Bloomington. The last time we were there—two weeks ago—we picked up a large takeout order from Godavari, the new Twin Cities metro outlet of a popular US-based South Indian franchise. That was a very good meal. This time we picked up food from India Spice House’s restaurant, which has been around since 2008. I don’t know if the restaurant or the grocery store came first but they’re right next to each other—you can even enter the restaurant directly from the grocery store. We once again picked up a large order to eat with friends on our deck. Was it as good a meal as the one from Godavari? Read on.

I’ve been planning to get to India Spice House for a while now. A number of people had recommended it to me over the years but you’ll have to be excuse me for being a little wary of most Indian restaurant recommendations in the US. The only review I’d read was a joint Star Tribune/Heavy Table offering that implied it was just another curry house. Nonetheless, I put them on the list when I last attempted a survey of the local Indian food scene in 2014. But we didn’t get to it before one mediocre to bad meal too many brought that survey to a crashing halt before I could get around to investigating further. In the ensuing years I did hear reports that the real reason to eat there was their South Indian offerings but my motivation was not high. However, in the last year I’ve begun to reevaluate the changed Indian food landscape in the area. After a number of very good meals at Kabob’s Indian Grill in Bloomington, Kumar’s in Apple Valley and, most recently, Godavari—all of which have menus and dishes aimed not primarily at the fans of the North Indian curry house classics but at the growing South Indian population of the Twin Cities suburbs—it was finally time to hit up India Spice House.

I’d placed the order the night before and we arrived at noon to pick it up; well, we arrived at 11.50 but I spent some time in the grocery store first. The restaurant is not tiny but it’s not over-large either. The aesthetic is relatively spartan compared to Godavari or Kumar’s but it’s a marvel of interior design compared to Kabob’s. They’re open for dining-in, by the way, though I only saw one table occupied as I waited for our order to be brought out. There were already a decent number of people coming in for takeout pickup though. Their menu does indeed have a good number of South Indian dishes on it—with an Andhra slant once again—but it’s also catering far more to stereotypical American expectations of Indian restaurants than any of the other places I mentioned above. This can be seen most clearly in the vegetarian entrees section which barely has any non-North Indian dishes; and nor do they include Malabar parottas in the breads section. Nonetheless, we put together an almost entirely South Indian order.

What did we get? From the starters section we got the Chicken 65 (quite good), the karaikudi pepper chicken (very good) and the mamsam roast/goat sukha (very good). From the vegetarian entrees we got the Hyderabadi mirchi ka salan (quite good) and the gutti vankaya/eggplant masala (decent). From the non-vegetarian entrees, the chicken Chettinad (very good) and the mutton dalcha (just okay). Plus a decent Hyderabadi chicken biryani, an order of tasty lemon rice and some overly sweet sambar. From the North Indian end of things we got an order of tandoori chicken and naans for the boys. If you get the biryani, by the way, get a side order of raita as well. The gent who took my order dissuaded me from this saying that the biryani already came with raita but then it turned out to be just more than a thimbleful.

For what it’s worth, though I asked for the dishes that should be spicy to be made spicy here as well, the heat level did not compare at all to that at Godavari. And oh: if you go to their website or call them they will advise ordering takeout online. The online menu, however, doesn’t list some of the special dishes that are on the printed menu in the slideshow below.

For a look at the restaurant and the food, launch the slideshow below. Scroll down to find out how much it all cost, what I thought of it on the whole and how I’d rate it relative to our meal at Godavari and in the general Indian scheme of things in the area. 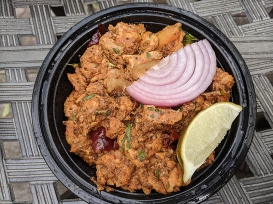 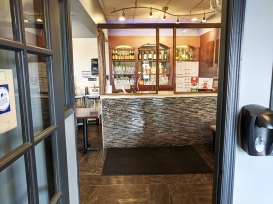 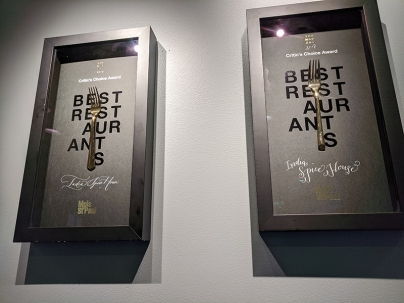 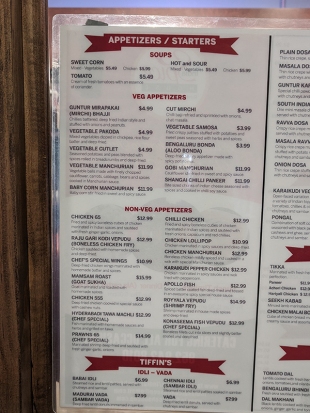 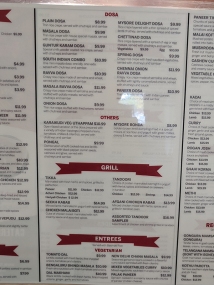 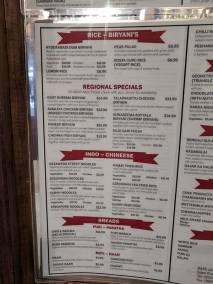 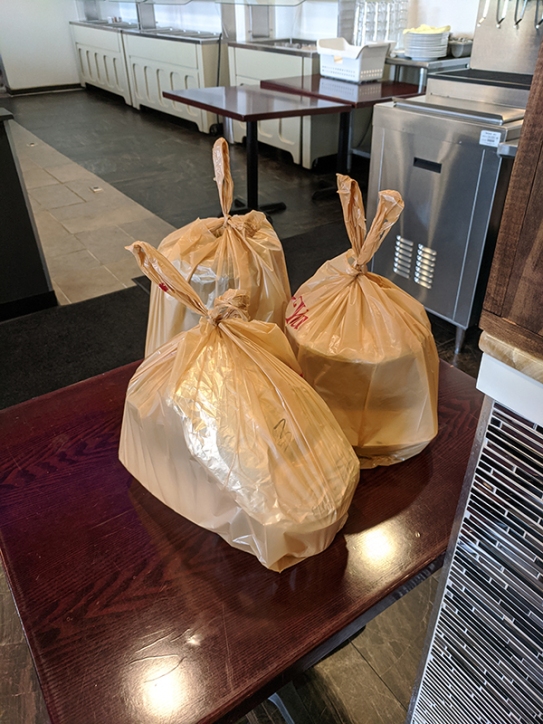 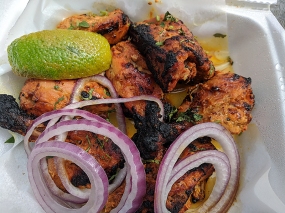 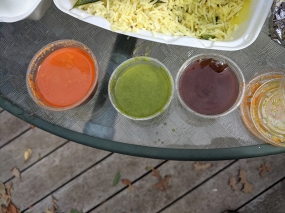 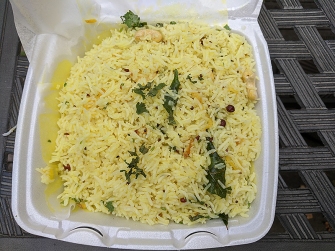 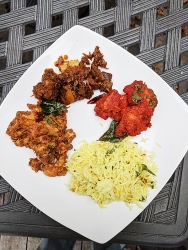 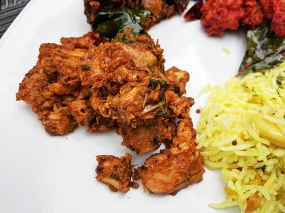 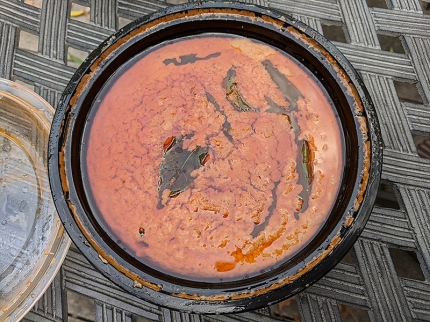 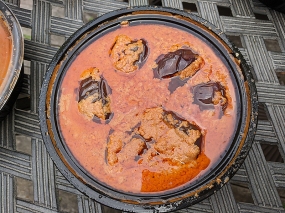 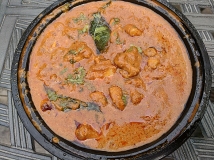 Well, it was a cheaper meal than Godavari. For a roughly equivalent amount of food, counting our boys as one adult, this came to about $26/head (we were 6 adults plus the two kids). As with the Godavari lunch this generated a lot of leftovers. All three couples took enough food home for another. So the true cost per head if there had been enough people there to eat it all in one sitting would have been below $20/head. That’s a pretty good deal for the quality.

But I have to say I’d be hard-pressed to go to Eden Prairie for Indian food and pick India Spice House over Godavari—which is about a minute’s drive away. Our orders from both places were very similar and there was only one dish whose rendition I preferred at India Spice House: the mirchi ka salan—and their food, on the whole, was a fair sight oilier. They’re going to have to up their game, I think, to ward off the defection of South Indian customers to Godavari. On the other hand, they may have enough of an American and North Indian clientele to weather that. They’re certainly above Bay Leaf and Persis in Eagan but I’d place them below not just Godavari but also Kabob’s and Kumar’s (based on our most recent takeout meal). That doesn’t mean it’s anywhere close to bad, of course, and in the abstract I’d be happy to eat their food again, but the competition is stiffer now in the suburbs than it’s ever been in the past. (I didn’t include Tandoor or Hyderabad Indian Grill—both in Bloomington—in the comparison above as I’ve only eaten the buffet lunches there.)

Speaking of Indian food in the suburbs, our next Indian takeout outing might take us to a suburb in the East Metro. That won’t be for a couple of weeks, however. Next week is probably going to see us eat Sichuan food made somewhere other than Grand Szechuan for a change.