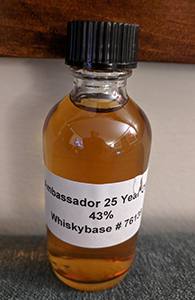 This week’s reviews are all of blends of one kind of the other. Monday featured the Campbeltown cask from the Edinburgh Cadenhead store from April 2014. That one was almost certainly all malt whisky, almost certainly all Springbank. But in the absence of specific information we will consider it a blended malt whisky. Today’s whisky is the the type of blend we think of more usually when we think of blended whisky: a blend of malt and grain. But it’s no easier to locate now than that one-off Campbeltown cask. This is a 25 yo from a defunct brand named Ambassador and I know very little about it. The person I acquired the sample from pointed me to this entry on Whiskybase. There is no bottling year listed there but another entry for an identical label indicates it was probably a 1970s bottling—so the whisky in it was distilled in the late 1940s or early 1950s. Apparently Ambassador once contained malt from Scapa and Glen Scotia though I’m not sure if this was still the case for 1970s releases. For more information on the brand I will direct you to Michael K’s review of an Ambassador 25. His review is not of this release though but of a much older bottle from either the 1940s or 1950. Okay, let’s see what this is like.

Nose: Quite juicy (oranges) along with some toffee. Just a hint of non-phenolic peat below. Sweeter as it sits with peach coming through as well. The citrus gets brighter as it sits (moving towards citronella). A few drops of water emphasize the sweeter fruit again.

Palate: As predicted by the nose at first but then there’s more peat along with a papery note. Very nice texture at 43% after however many decades in the bottle. On the second sip there’s a bit of a metallic note as well. Fairly consistent with time: sweet citrus, a bit of peat, a slight metallic note. With more time still the peat expands further (some charcoal as on the finish along with some hot tarmac). Okay, let’s add some water. Ah yes, fruitier still with the sweet citrus expanding; the peat comes in behind and is sweeter too now (pipe tobacco). The peat expands as it sits: carbon paper and charcoal and paper.

Finish: Long. The peat expands along with the metallic note. Slightly bitter now with some charcoal. As on the palate with water.

Comments: Well, I may know close to nothing about the antecedents of this whisky but I do know I like it a lot. I’ve not had contemporary 25 yo blends. Are they as good? Perhaps but probably not very similar as the peated profile here is of an older, bygone Highlands style.