With this post I complete, as far as I know, a series of reviews of Glenfarclas’ entire basic age-stated range. And it’s a large range. Here are the others, in order of age, if not in order of review: 8 yo, 10 yo, 12 yo, 15 yo, 17 yo, 18 yo, 25 yo, 30 yo and 40 yo. I don’t know if there’s any other distillery that has ever offered such a large range of stops up their maturation ladder—yes, I know the 8 yo and 18 yo weren’t really part of the core range. The 21 yo and 25 yo continue to be available at very reasonable prices relative to the competition—the 21 yo a bit above $100 in many US market and the 25 yo at about $150. Alas, the same can no longer be said about the 30 yo (which never came to the US) and the 40 yo but it’s hard to complain about Glenfarclas in this respect. They’re one of the few Scottish distilleries whose prices seem to have the middle-class whisky enthusiast in mind. The less charitable may note that very few of the releases in their core range ever seem to get very many people excited but not all whisky needs to set off fireworks.  END_OF_DOCUMENT_TOKEN_TO_BE_REPLACED 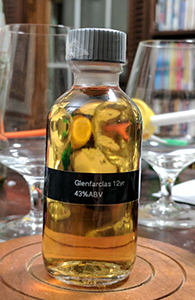 Back to Glenfarclas. I’ve previously recently reviewed the 8 yo and the 10 yo—I found the first to be passable (78 points) and the second a bit better (80 points). Will the 12 yo, with its bump up to 43% abv, continue the incremental improvement/rise in my ratings? Let’s see. This one, like the 10 yo, can be found easily all over the US.

Nose: As with the 8 yo and the 10 yo, there’s obvious citrus here (orange again) but this is maltier from the get-go and there’s a milk chocolate/cocoa powder note. Less citrus and more malt at first with a few drops of water but then the fruit comes back strong.

END_OF_DOCUMENT_TOKEN_TO_BE_REPLACED 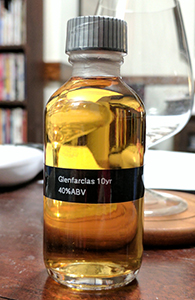 Last week I reviewed the Glenfarclas 8—the malt that may or may not be the youngest age-stated malt in their lineup. The confusion stems from the fact that Winesearcher shows it on sale in many places in the EU (it was never available in the US) but Glenfarclas themselves don’t seem to list it on their website. The status of the 10 yo, however, is far clearer. Glenfarclas do not deny its existence on their website and it’s widely available everywhere, including the US. It may then be more accurate to say that this is effectively the entry-level malt in the Glenfarclas portfolio. In Minnesota it can be found in the low $30s but its average price nationally is $46. By the way, if you haven’t done so, you should check out the latest in Michael Kravitz’s annual parsing of production and price trends of Scotch whisky; the final entry in this year’s series lists, among other things, the rate of increase of price of most popular single malts—the Glenfarclas 10’s price has gone up almost 22% in the last 10 years. But what is it like?  END_OF_DOCUMENT_TOKEN_TO_BE_REPLACED

Here is another bizarrely named release of Bowmore from Jack Wieber’s “Wanted” series. This was distilled in 2001 and was released in 2012. I have so far reviewed two others in this series (see here and here); those had odd names too but not quite as odd as this one, which I think I would, on the whole, rather not have explained. Well, I did like both of those a fair bit, so if oddness of name maps on to quality of whisky then I should be in for a treat. Let’s see how it goes.

Nose: A little blank at first but then it starts getting both fruity (melon, a bit of guava) and coastal (seashells, brine). On the second sniff it’s also quite custardy and there’s some sweet and prickly peat too now. Fruitier with time. With water it gets a little mentholated but the custardy fruit is still to the fore.  END_OF_DOCUMENT_TOKEN_TO_BE_REPLACED 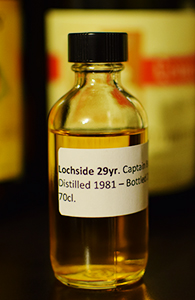 Lochside is one of those closed distilleries that is never coming back. Located in the eastern Highlands—well east of the Speyside and separated by it from most of the distilleries we usually associate with the Highlands—it was closed in 1992 and then demolished in 2004-2005. It was somewhat unusual in that it was set up to produce both grain and malt whisky—though I’m not sure if grain whisky was indeed produced there for its entire history. As with a number of closed distilleries, Lochside’s reputation expanded well after its closure. It is also one of the distilleries that has a magical year of production associated with its name. People go on about Caperdonich distilled in 1972 and BenRiach and Tomatin distilled in 1976, and in the case of Lochside, it’s the 1981 vintage that is said to be the magical one. I haven’t looked into it closely but I suspect the same selection bias is at play as I’ve described for Caperdonich and Tomatin. Feel free to heap coals on my head. It won’t be the first time.  END_OF_DOCUMENT_TOKEN_TO_BE_REPLACED