I have lived in southern Minnesota for almost 15 years now but I’m only just beginning to really get a sense of the suburban geography of the Twin Cities metro. For example, for many years when I’d hear names like West St. Paul or South St. Paul I assumed people were referring to the western or southern bits of St. Paul. Now I know they’re actually referring to what are officially separate towns—both of these towns, by the way, have populations close to that of the town I live in, about 50 minutes south of the Twin Cities. And the demographics of these suburbs can vary quite a bit. South St. Paul, for example, has a large Hispanic population. Indeed, people of Hispanic descent are the second largest group in the city at nearly 15% of the population. I bring this up because it might explain why a Mexican seafood restaurant opened here, just about two years ago, during the pandemic and has managed to weather it so far. I’m not sure if there’s been much coverage of it elsewhere but I saw a reference to Las Islas on the excellent East Metro Foodies Facebook group a couple of weeks ago and my interest was piqued by their seafood-centered menu, heavy on ceviches and the like. And so this past weekend we descended on them with a couple of friends. Here is what we found.

We came up from the south on Highway 52 and if South St. Paul has a beautiful side I don’t think we were on it. This despite the fact that the restaurant is located on Concord street right by the Mississippi. The approach, however, is through a fairly sterile set of neighbourhoods, dominated by business parks and businesses in buildings that would not enter beauty contests, leave alone win them. And there were very few people about at midday on a Saturday. The restaurant itself doesn’t look like much from the outside: mostly like a large cinder block right on the street. But the exterior belies an attractive interior. The outdoor seating—which will open for the year in early May, we were told—is more attractive still and would be even more so if there weren’t a train yard between it and the river. Still, I hope to come back and eat on it later in the summer. This because we really liked the food.

As noted, the menu is dominated by seafood. Yes, the more familiar meat-based staples of Mexican restaurants in the US are all available too but as far as I can tell, the seafood is the reason to go. The food is said to be that of Acapulco, which meant little to me other than the knowledge that it’s a coastal town very popular with tourists. I couldn’t tell you if the food served at Las Islas is very representative or a superior iteration of the cuisine of Acapulco but I can tell you we liked everything we ate and liked some things very much indeed.

There were six of us, including our boys, and to be safe we ordered six dishes. The boys shared a large platter called Tierra y Mar (or Land and Sea) which featured grilled chicken, beef and shrimp alongside rice and beans. They liked it fine enough but the adults who tried bites of the meats weren’t quite as enthusiastic as them. However, we had no complaints about our own food. They have a number of ceviches on offer and we got the mix, which features shrimp and octopus. It was excellent with a nice balance of acid and heat—and the red salsa that accompanied it for extra heat was rather hot indeed. Also excellent was the mix caldo/soup of fish and shrimp. This was relatively mild but very tasty indeed, especially when mopped up with the accompanying bread.

Also very good were the tacos gobernador and the filete Las Islas. The former is a style of taco—new to all of us—which features a tortilla lined with cheese, stuffed with fish, crisped on the grill and topped with chopped tomatoes etc. There were three tacos to the order, absurdly stuffed but quite tasty. A similar flavour, though not identical, was on offer with the filete Las Islas which features a nicely grilled piece of snapper completely hidden under a metric tonne of chopped salsa. Rice and salad round out the plate. The last dish was the pulpo/octopus en su tinta (or in its own ink). The ink wasn’t really much in evidence, I have to say, and while the octopus was tender enough, we felt it could have used a bit more char from the grill. The salsa underneath it—which seemed to involve cream and chipotle—kicked it up a notch though.

We were stuffed with the above—the portions are not small—but because we are greedy we could not pass on dessert. We ordered one each of their flan, platanos fritos (fried plantains) and churros. The flan was tasty if more dense than I prefer; the churros and the platanos fritos were fine.

They also have a large drinks menu—and a large bar—but we stuck to lemonade for the boys and water for the adults.

For a look at the restaurant and what we ate, launch the slideshow below. Scroll down for thoughts on service and to see how much it all cost. 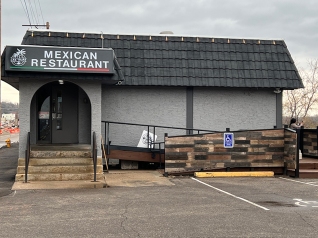 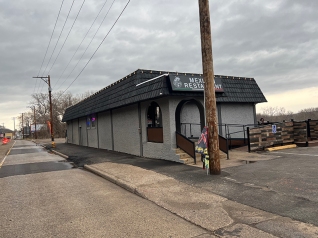 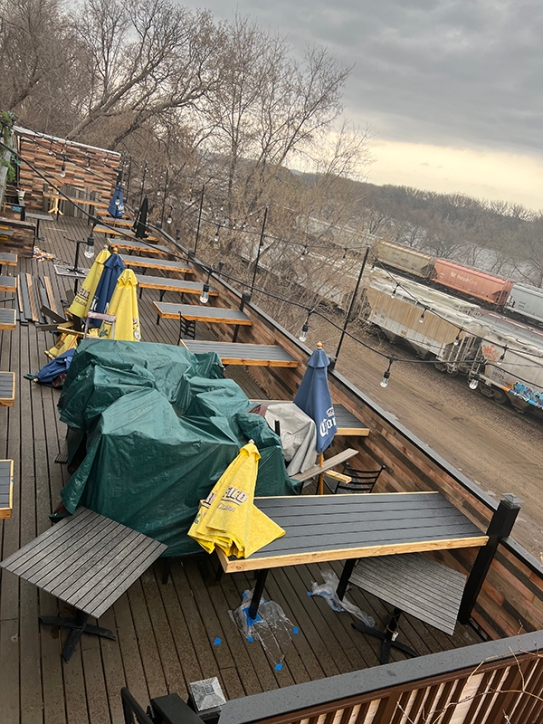 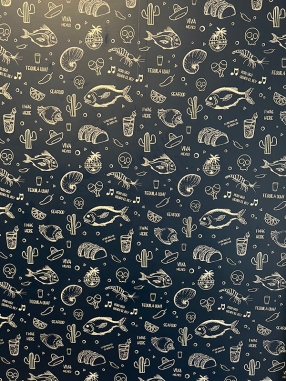 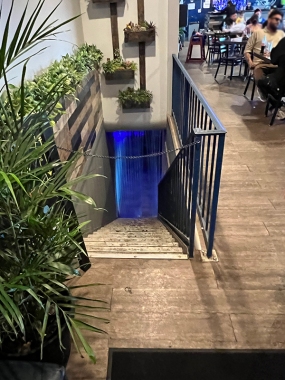 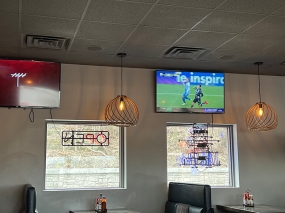 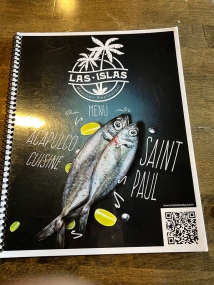 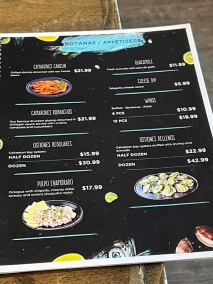 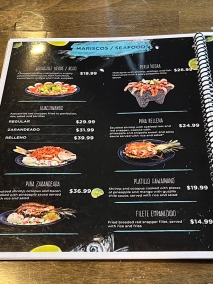 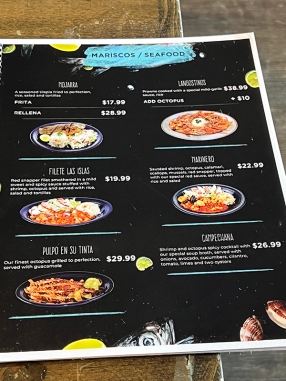 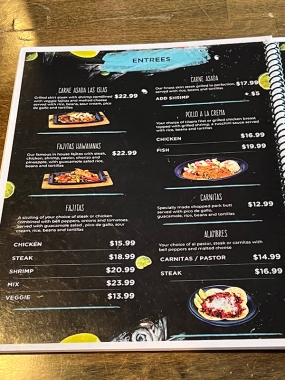 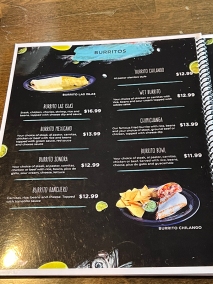 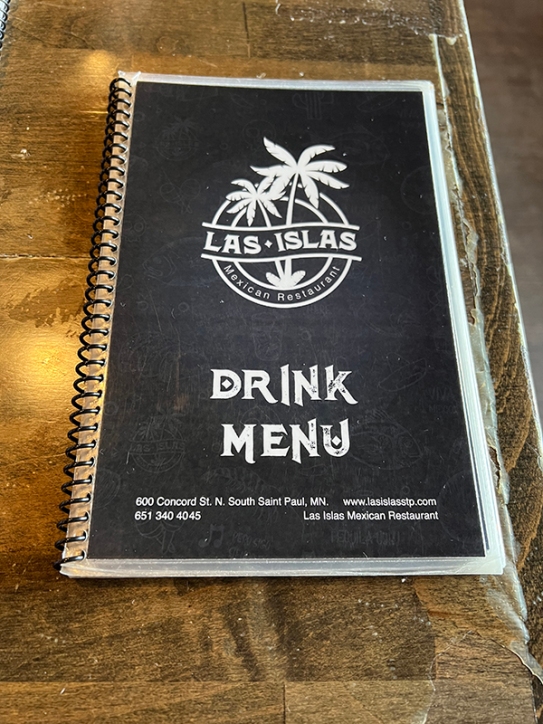 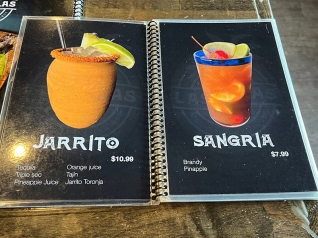 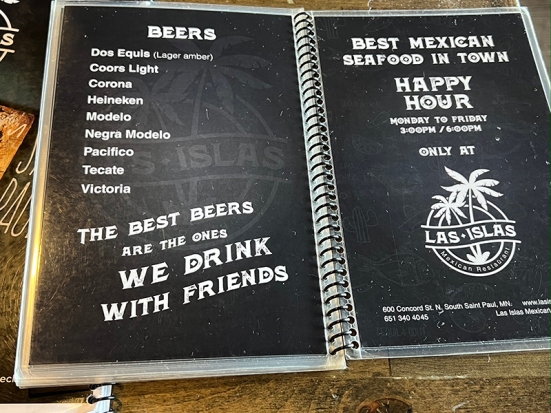 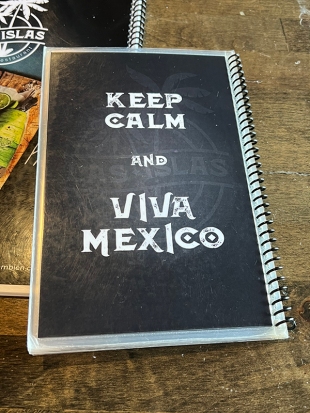 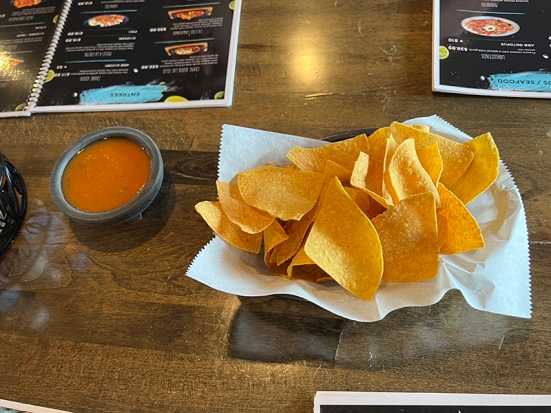 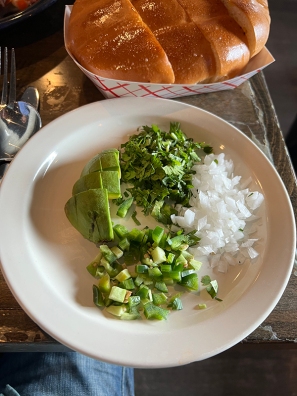 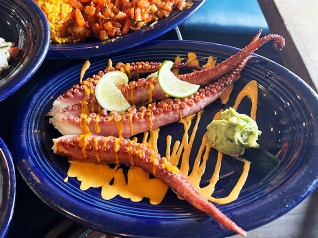 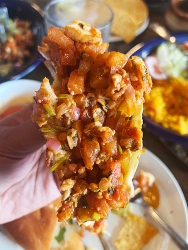 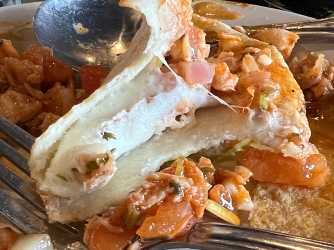 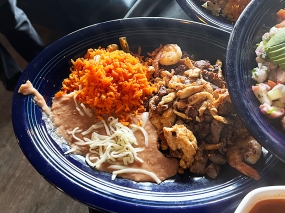 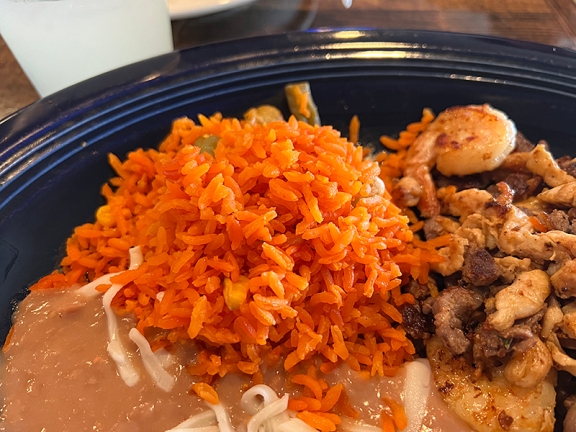 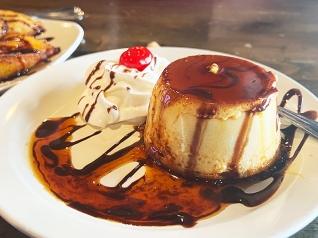 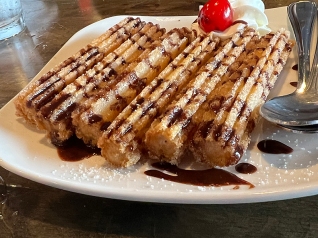 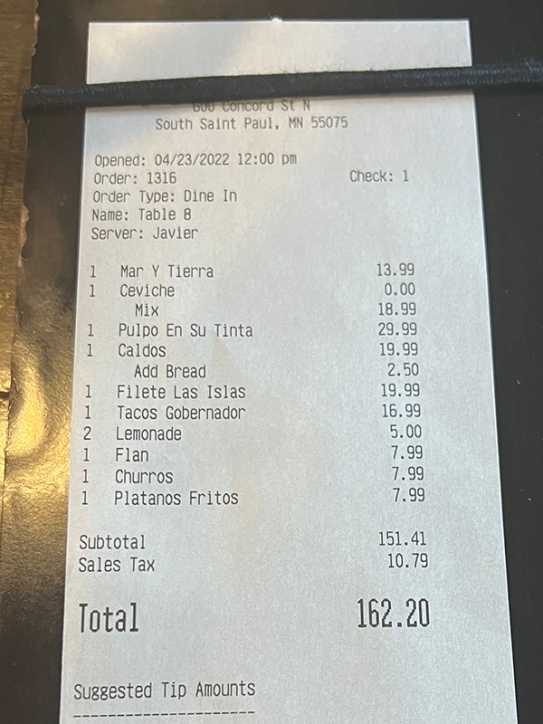 The restaurant was not very busy when we arrived shortly before noon but had begun to fill up as we were getting done. Service was pleasant and present throughout. Our server answered questions and made recommendations and we were checked on frequently. It is a large restaurant though—and will be larger still once the outdoor seating kicks in—and one assumes it could get more hectic at peak occupancy. Nonetheless, we hope to come back in the summer and try more of the menu, ideally while sitting outside. We’d like to try their aguachiles in particular and also their molcajetes which feature large portions of seafood etc served in large stone mortars (molcajetes).

Price? With tax and tip we paid a total of $195. Counting leftovers it was enough food for six hungry adults. Or about $32/head. Which is a very good deal when you consider how much seafood we ate. Highly recommended if you have not been. If you have been and would recommend other items on the menu, please do write in below in the comments. And do write in as well if you have recommendations for other Mexican or other Latin American restaurants of this quality in South St. Paul or West St. Paul. Or for that matter in North St. Paul.