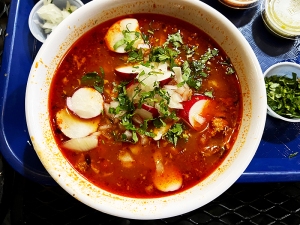 We were scheduled for Mexican dinner with friends on Saturday night but not this Mexican dinner. We had reservations at Colita for a four-top on their patio. Alas, as the day approached the weather forecast turned ever dire. We woke up with hope on Saturday as the meteorologists predicted that the rain would end before dinner time. But the meteorologists are dirty liars and as the evening approached the threat of rain remained constant and the restaurant cancelled all patio reservations. We could, of course, have chosen to stay at home but I put it to our friends that we could go somewhere else for a Mexican meal and they were up for it. And so we drove to Richfield and ate dinner on Andale’s patio. It was not the fine dining meal we’d planned but it was a very fine meal. END_OF_DOCUMENT_TOKEN_TO_BE_REPLACED

1979 appears to have been an important year in the history of Twin Cities dining. It is the year in which Saji-Ya opened in St. Paul and it is also the year in which El Burrito Mercado—perhaps the Twin Cities’ most iconic Hispanic business—opened. It opened however entirely as a mercado/market; it wasn’t until 1983 that they started serving food. And it was in 1995 that they moved into the massive space they currently occupy on Cesar Chavez avenue and which they have added to steadily over the years. This expansion has largely taken the form of ever-greater dining space. The complex now contains a large market (with prepared foods and a butcher shop), a counter-service cafe, and a  bar/restaurant space with two dining rooms and a large adjoining patio which features live music and so forth. We ate lunch on this patio this past Saturday with the same crew that had joined us at Mañana two weeks prior. Here’s how it went. END_OF_DOCUMENT_TOKEN_TO_BE_REPLACED

We had been slated for several weeks to eat dinner at Petite Leon this past Saturday. But with the Delta variant spreading quickly in Minnesota—and reports that the Pfizer vaccine may not offer very strong protection against breakthrough infection—and August 2021 beginning to feel increasingly like August 2020, we decided to be cautious. And so we cancelled our plans for fine dining Mexican dinner in Minneapolis and instead went for casual, outdoor Mexican lunch in St. Paul. Our port of call? The relatively new Taco N Madre on St. Paul’s West Side (I think). Here is how it went. END_OF_DOCUMENT_TOKEN_TO_BE_REPLACED

The food plan for this weekend was a takeout run to Namaste India Grill all the way up in Arden Hills. But the crappy weather on Saturday (though my vegetable garden plot appreciated it greatly) put paid to that. So instead of picking up Indian food from the northern suburbs of the Twin Cities to take to our pod friends’ home for dinner we picked up Mexican food right here in our own town. And for a change we did not pick it up from El Triunfo. No, we got it instead from Coco’s Place, a new restaurant located on the town’s main drag, Division Street. This is the spot previously occupied by another Mexican restauant, Kahlo, which I never got around to reviewing before they moved to a less settled situation down the street. Kahlo, by the way, is the venture of the chef/owner who had operated Maria’s at the same location that now houses El Triunfo. Coco’s Place meanwhile is the first official retail location of a food business that has been in operation for a few years now but not previously from a storefront. Well, despite my ongoing loyalty to El Triunfo (for food and extra-food reasons) I am very glad to also have Coco’s Place in town now. Their menu is not identical to that at El Triunfo but the food we got from them was very tasty as well. Herewith the details. END_OF_DOCUMENT_TOKEN_TO_BE_REPLACED 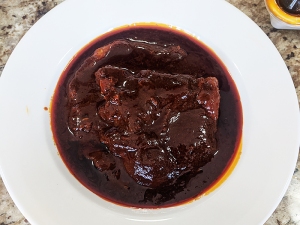 Those who read my pandemic takeout posts regularly know that we’ve been wanting and planning to get back to Homi for a while now. Something or the other has been getting in the way. We could have hit them up a week ago but the weather that weekend was not going to be conducive to outdoor dining and so we decided to do a Vietnamese meal (from Trieu Chau) by ourselves. This past weekend, however, was a different story. It was warm and sunny which meant we could return to pandemic deck lunching with friends—which in turn meant we could get a very large order from Homi, with most of our favourite dishes on it. And so we did. And it was good. END_OF_DOCUMENT_TOKEN_TO_BE_REPLACED

It’s been a while since I’ve checked in on Northfield’s house of Mexican deliciousness, El Triunfo. Which is not to say that we hadn’t eaten their food since my last report. Indeed, today’s pandemic takeout report covers things eaten over four meals. Since my previous report they’d opened for dining-in, closed it down again when the governor mandated it (not a given in these parts) but have not yet restarted it after the restrictions were once again loosened in January. They are still ticking along but business is not exactly booming. The food is as delicious as ever though and if you are in town or within easy reach I urge you to give them a call. END_OF_DOCUMENT_TOKEN_TO_BE_REPLACED

Our takeout range has expanded a fair bit in the last few months of the pandemic. At the end of June we finally made it to the Twin Cities’ true “Eat Street” to pick up Thai food from Bangkok Thai Deli. We then went back for more Thai food from Thai Cafe. And last weekend we finally got back to our favourite Mexican restaurant in the Twin Cities: Homi. I’ve reviewed meals at Homi thrice before (first in 2016 and then in 2018 and 2019). After our trip to India in January we had been looking forward to going back and then the pandemic hit. We’d have liked to have supported them through the early months of the stay at home orders but living 50-60 minutes away, as we do, it just wasn’t on the cards. I am glad to be able to report therefore that they have made it through the pandemic so far and that the food we picked up from them on Saturday to eat with friends in their backyard in St. Paul was perhaps the best meal we’ve had from them in some time. END_OF_DOCUMENT_TOKEN_TO_BE_REPLACED 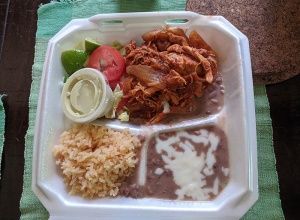 I am very glad to report that our favourite restaurant in our little town, El Triunfo, seems to have weathered the pandemic fine so far. Business seems to be steady—makes sense as their food is as good as ever. I haven’t reported on our meals there since mid-May but we’ve been picking up food every once in a while, even as we’ve expanded our takeout range quite a lot since then. Their socially distanced pickup routine has changed a bit since my first pandemic report. Curbside pickup now happens via the front entry of the restaurant. Everything else more or less remains the same. You can still pay over the phone if you prefer to (as we do) or you can go in—with a mask on, naturally—and pay and pick up your food. The phone number and pictures of the menu are included in the slideshow below. END_OF_DOCUMENT_TOKEN_TO_BE_REPLACED

El Triunfo, as I noted last week, is the place we’ve been ordering the most takeout from during the quarantine. Both because we like the food and because we want to support this immigrant family business that is such an important part of our town as far as we are concerned. I’m glad to say that, at least as far as I can tell, they are doing decent business during the pandemic. We get food from them about once a week and each week it’s seemed like there have been more people waiting outside to pick up orders. I do hope they will make it through. Here now is a brief report on what we’ve been getting from them over the last month. END_OF_DOCUMENT_TOKEN_TO_BE_REPLACED

People who pay attention to my restaurant reviews know that I am not very high on most of the food options in our small town in Southern Minnesota. This, however, is not a time for restaurant meal reviews of the kind I write in normal times. These are not normal times. I am rooting for all the restaurants out there even as I know that many/most of them will have a tough time making it through the business crash of the pandemic. And I am particularly rooting for the restaurants whose owners don’t have deep pockets or investors backing them or easy access to loans or the ability to leverage most of the strategies that more established and savvy restaurants are deploying to survive. The deck is stacked against them even in normal times and even more so now. Which brings me to El Triunfo, a small grocery and informal restaurant in our town that people who pay attention to my restaurant reviews know I am very high on. I am rooting for all the restaurants in our town to make it—even the ones I’ve said the rudest things about in normal times—but I hope they’ll forgive me if I admit that I’m rooting the hardest for El Triunfo.  END_OF_DOCUMENT_TOKEN_TO_BE_REPLACED

As I have said before, since the demise of La Huasteca, Homi on University Avenue in St. Paul (where else?) has been our favourite Mexican restaurant in the Twin Cities. I’ve reviewed it twice before (here and here). But I like to keep up on the blog with our favourite restaurants, not just eating there but also reporting on their trajectories over time, checking in on how things are going. Accordingly, I have another report today on a recent dinner at Homi. We ate there two weeks ago with friends after a rather disappointing theater outing (The Song of the Summer at Mixed Blood). The dinner, I am glad to say, was much better. END_OF_DOCUMENT_TOKEN_TO_BE_REPLACED