I have been told on occasion that for someone who reviews a lot of restaurants in the Twin Cities I have a major blind spot when it comes to older restaurants. I suppose this is true, especially at the high end. With very few exceptions, most of the high-end restaurants I’ve reviewed either opened after we got to Minnesota in 2007 or not so very much before. I’m not really sure why that is—I suppose I am guilty as much as anyone else of following the pr-driven newer places that get more attention online. Well, in an attempt to begin to redress that gap we had dinner recently at Luci Ancora, a venerable St. Paul institution for Italian food.

The restaurant’s origin is as essentially a second location of the since-closed Ristorante Luci (the site now of Myriel, just a couple of hundred feet from Luci Ancora) in the Highland Park neighbourhood of St. Paul. The original restaurant opened in 1988 (and closed in 2016). Luci Ancora was an expansion that happened about a decade later. It’s now been open almost as long as Ristorante Luci had been and, from what I can tell, is a beloved restaurant among many diners in the Cities. As such, I am fairly sure this review will not be very popular. No, we really did not care for our meal, especially at the price we paid for it.

We were a party of four: the missus and I and our two boys, who now deeply enjoy eating adult dinner out with us once a month, especially if the food on offer is Italian or Italian-adjacent. Luci Ancora therefore seemed like a very good choice. We booked a table on their patio (adjoining their parking lot) and arrived at 6 pm on a Saturday. The restaurant was quite busy, with only a few tables empty indoors and even fewer outside. And they stayed busy through all the time we were there.  The menu is quite edited, which generally is a good sign. A few starters, a few pastas and a few mains and desserts. In addition to the regular menu there were a specials and it transpired that it was also possible to put together a four course tasting menu for $47. We opted, however, for the carte and for our usual sharing of plates.

We started with two selections from their antipasti section. (Well, to be accurate we started with the bread and butter they put down on the table.) These were the Prosciutto e Melone and the Polenta Fritta. The first was completely disappointing. This mostly because the cantaloupe was hard and flavourless (this theme was to be repeated later). The polenta, served with braised pork on top, was better but nothing so very special either.

To follow we had three pastas. Actually, we’d ordered two but after seeing the portion size we ordered a third. First up was the pasta special: housemade tajarin (aka tagliolini) with chanterelles, triple cream cheese, leeks and figs. It looked good but, alas, had little character. The chanterelles were limp, the pasta was overcooked and the sauce barely coated any of it (this was also a theme that was to be repeated). We also got the Penne alla Luci, which featured penne with diced chicken breast, broccolini, chicken broth and fresh tomatoes. The pasta and broccolini were cooked well but that’s about all that went right here. The chicken breast was overcooked (yet another repeated theme), the tomatoes were hard/not ripe and flavourless, and the broth sat in a pool at the bottom of the bowl, with no effort seemingly having been made to emulsify it with the pasta starch. The third pasta was the Spaghetti ai Frutti di Mare del Giorno. The seafood of the day was blue prawns. The prawns were fine. The spaghetti was not al dente and the sauce which featured fire-roasted tomatoes and peppers blended together was blah and, again, not emulsified properly with the pasta starch.

Things did not get much better with the mains. We got two of these. The Maiale al Marsala, seared duroc pork prime rib, was not seared but completely overcooked. The vegetables on the plate were much better as was the marsala reduction. The second main had even less to recommend it: Manzo or aged and grilled New York strip served with spinach and ricotta gnocchi. We asked for the steak to be cooked to a medium rare but what came out ranged from medium well in the center to well done at the edges. We thought about sending it back but with the need to get home before the boys’ bedtime got pushed back too late, we did not do so. The spinach-ricotta gnocchi were decent and would have been better if not completely doused in ricotta.

At this point you’re probably expecting dessert to have been even worse but this was actually the best part of the meal. We had an absolutely unobjectionable Flourless Chocolate Torte with Red Wine Caramel and the Toasted Lemon Angel Food Cake with Fresh Fruit + Whip Cream.

To drink: the boys had one each of their Luci mocktail (pineapple juice, lime, ginger syrup soda). The missus and I started with a glass each of sparkling rosé and I added on a glass of a Cabernet blend.

For a look at the restaurant and everything we drank and ate, launch the slideshow below. Scroll down for thoughts on service and to see how much it cost and what we thought of the value. 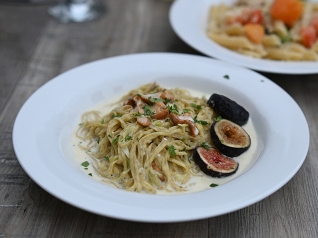 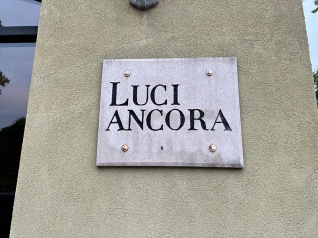 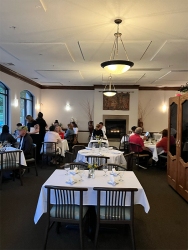 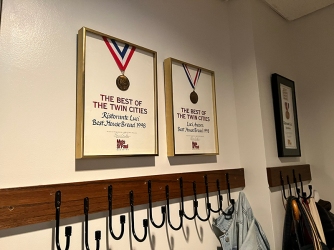 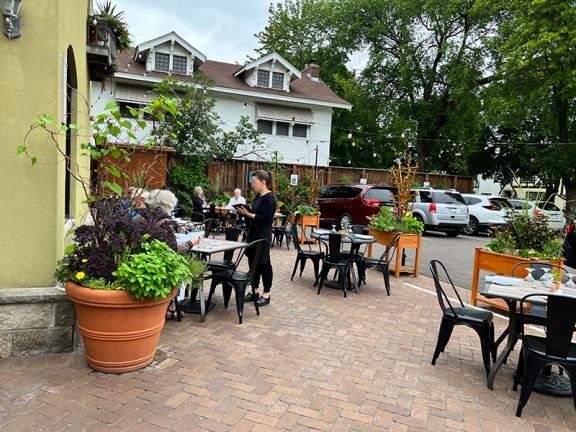 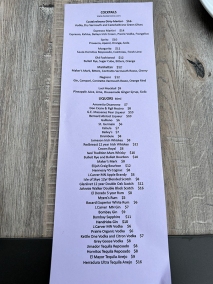 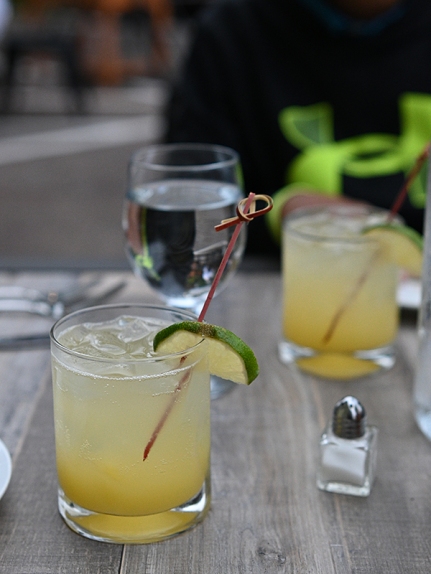 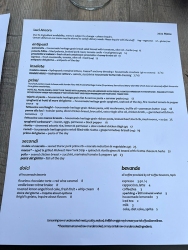 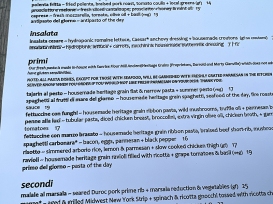 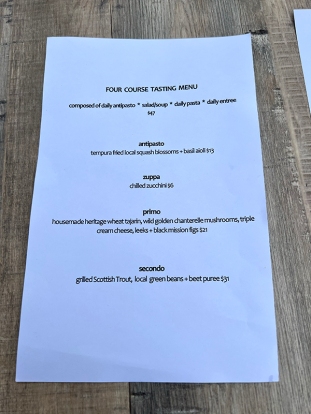 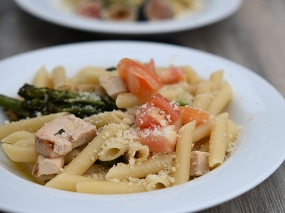 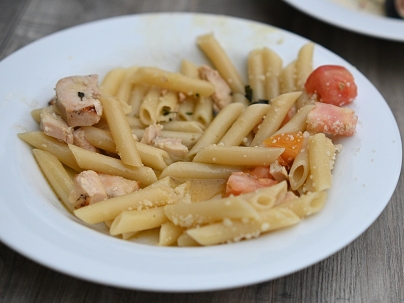 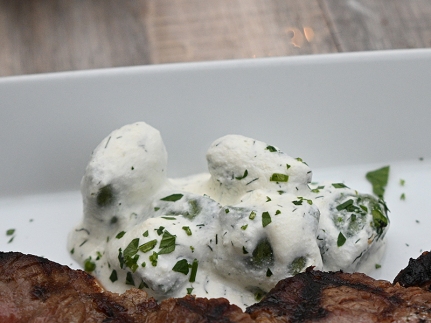 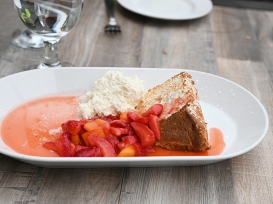 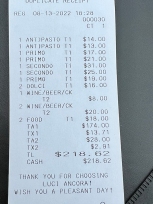 If the food didn’t do it for us, the service was very good. Very present, very attentive and friendly without being over-familiar. However, the food really didn’t do it for us. The pastas were blah at best and both the pork and beef were over-cooked to a degree that should have been caught by the kitchen before being sent out. And there’s just no excuse for the poor quality of the cantaloupe and the tomatoes. Is this representative of the kitchen’s abilities? After one meal it’s hard to say but there was nothing at this meal that had us interested in coming back to try more of the menu.

And that’s before I even take price into account. With tax and tip we paid $253 for this meal. That’s $63/head. Which is just too much for a meal of this quality. For reference we paid $63/head at Bar La Grassa and even though we weren’t very impressed by that meal either it was head and shoulders above this one. My last meal at Hyacinth which featured far more food and drinks cost $70/head and was also far superior. (Keep in mind that if we’d been four adults at this meal the final cost would have been at least $70/head with more drinks and more food.) Indeed, I’d happily go back to Mucci’s before I’d come back here. Comparisons aside, I think this meal would need to be almost half the price for me to not feel like I’d been ripped off.

On the whole, Luci Ancora seems very much like it’s still in the 1990s. There is much better Italian food to be had now in the Twin Cities than we encountered here (and even more better food for the dollar). Perhaps nostalgia has something to do with their popularity; perhaps it’s their place in the neighbourhood—but they’re not charging like a neighbourhood restaurant.

Well, if there are other old-time Twin Cities restaurants you feel we really should try—W.A Frost? The Lexington?—please let me know. In the meantime, I am looking forward to a return to Tenant this weekend, where we can be assured of far better pasta and properly cooked meat.