Those of you who are misguided enough to follow this blog closely know that this year the missus and I began taking the boys out to an adult dinner with us once a month or so. Our ports of call so far have included Luci Ancora, Bar La Grassa, Myriel, 112 Eatery and Mucci’s. Those who also know these restaurants can also tell that with the exception of Myriel they have in common either a full-on Italian focus or—in the case of 112 Eatery—a menu that features a number of pastas and grilled meats. These, you see, are the best bets for dining out with our boys—they’re probably more adventurous as eaters than most of their peers but we’re not paying for them to spurn 75% of what’s on their plates at places like Alma or Tenant or Spoon & Stable. But Italian food is easy. Accordingly, we’re in the process of doing a slow-motion tour of the more popular/better-regarded Italian places in the Twin Cities. This month saw us make a stop at Terzo, the most formal of the outposts of the Broders mini-empire at the intersection of 50th St. and Penn Ave. in South Minneapolis. Herewith, the details.

This was actually the missus and my first visit as well to Terzo—or, for that matter, to any of the Broders properties. I’m not really sure why that is. Anyway, I’m not the best person to tell you the history of the Broders restaurant. If you are that person, please write in below. I can tell you that during the pandemic—or so our server informed us—Broder’s grew an outdoor space (a terrace on their Resy page) which then underwent a series of modifications. The current version—right next to their parking lot—is covered, with air-conditioning in the summer and heating in the winter, but with large openable windows running the perimeter of the dining room. This area is completely separate from the main restaurant. The kitchen opens into it but if you want to use the bathroom you’ll have to exit onto the street and then go into the main restaurant next door. I’m not sure what the point of eating in this section would be in the winter, when the windows will presumably be closed—if the section is even open; it may be a fall only thing (I did not think to ask). But right now it’s very nice out and so it was on the terrace that I reserved a 4-top.

We arrived to find this outdoor area—which has its own bar—fairly empty but it did begin to fill up as the evening went on. The indoor dining room was completely full by 8 pm (which, in case you’re wondering, is when I used the facilities). We sat down, perused the menu, ordered some cocktails (for the parents) and non-alcoholic strawberry-basil shrubs (for the boys) and got down to bidness.

The menu is divided into several sections: Per la Tavola (“For the Table,” I think), Antipasti, Primi (basically pasta and risotto), Secondi, Contorni (sides) and Porchetta. We ordered from the first four of these sections but, as is our wont, got everything to share family style. We were particularly pleased to see that they offer both half and full portions of pasta.

What did we order? From the Antipasti section we got the chips and aioli, the prosciutto and the house-made focaccia. The chips were really good as were the two aiolis—there was a lot of the chips but we held on to them and finished them over the course of the evening. The prosciutto was very good too—but as a friend of mine used to say in a different context, that’s shopping, not cooking. The focaccia was fine—the infused olive oil it came with (the menu said scallion, our server said chive) improved it. So, a good start. Oh yes, the meal proper began with an amuse (or aperitif in Italian) of little cubes of pickled beet with something or the other on top.

We got the octopus from the Antipasti section along with a couple of half-orders of pasta for the second course. The octopus was tasty enough but it was a small portion. The pastas were much larger than we were expecting (see below for explanation) and were uneven. We quite liked the bucatini all’amatriciana but the ragu with the cavatelli was far too acidic. For our mains we got the maiale or pork ribeye cap. This was served with various things. I’m not sure if it was the burnt orange sauce or the charred rapini that was to blame but everything was too aggressively infused with char/smoke. The pork itself was cooked well but between the aggressive char and the too-cloying sauce the whole didn’t add up. The manzo or beef (supposedly wagyu top sirloin) was seasoned well, and the arugula salad it was served on was nice, but was cooked inconsistently. The slices ranged from medium to medium well bordering on well done. And no, we weren’t asked how we wanted it done.

So a bit of a falling off from the beginning. How about dessert? The missus and I split the panna cotta and our boys—who couldn’t deal with most of the desserts on account of their nut allergies—got a sorbet each, one raspberry and one lemon. The panna cotta was nice and very properly jiggly. The raspberry sorbet was likewise done well. The lemon sorbet on the other hand was all but full of ice crystals and a very crunchy experience.

For a look at the restaurant and what we ate, launch the slideshow below. Scroll down for thoughts on service, for the resolution of the pasta story, to see how much it cost and what I made of it on the whole. 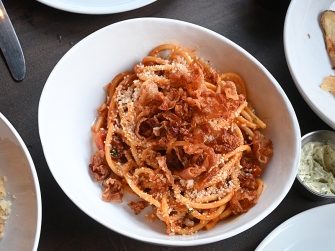 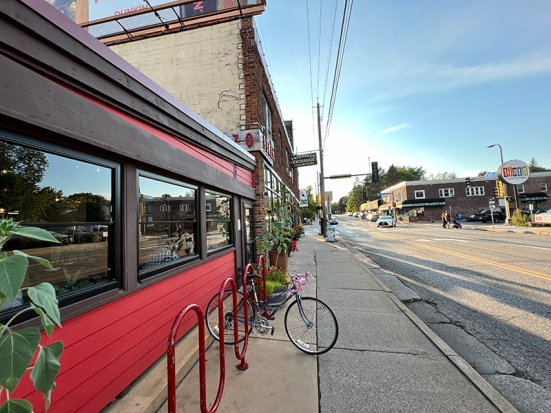 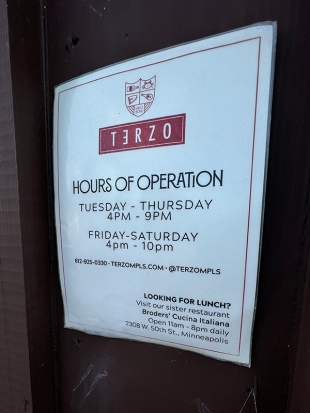 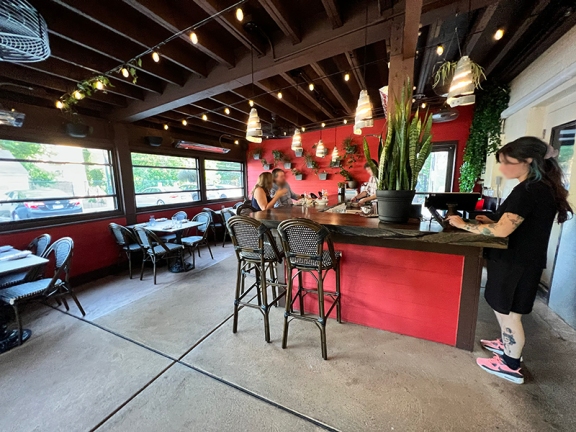 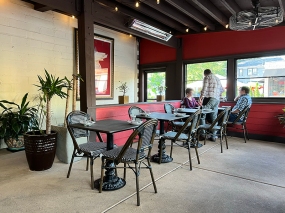 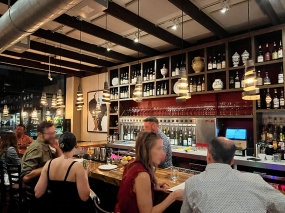 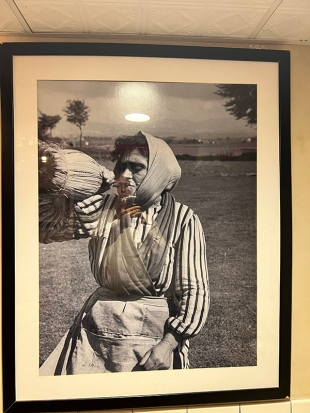 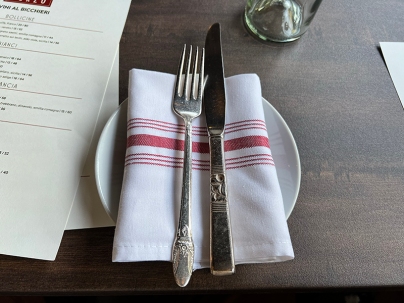 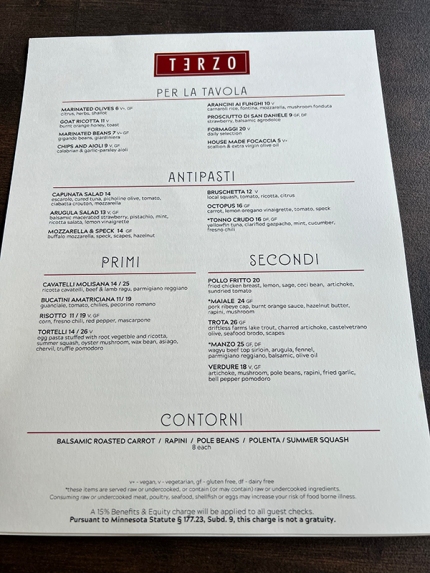 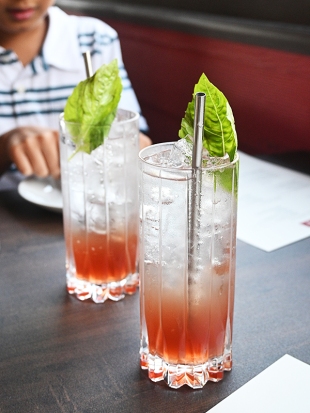 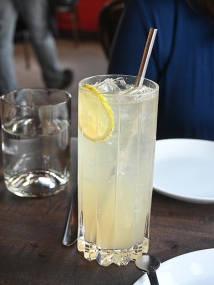 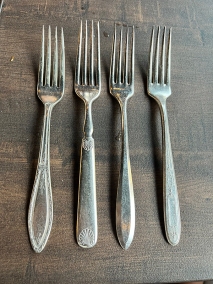 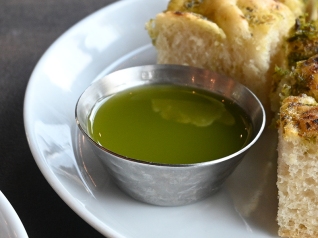 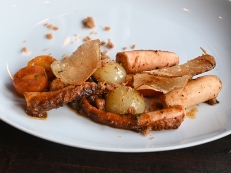 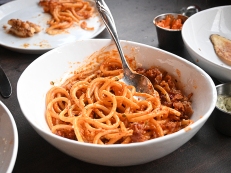 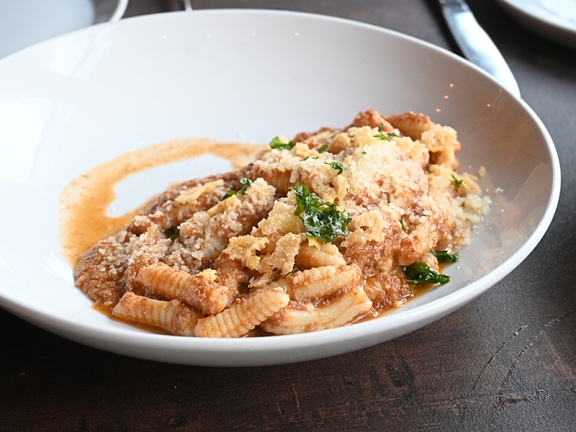 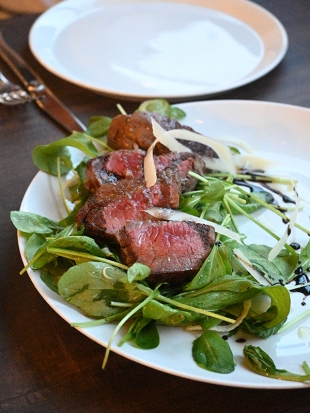 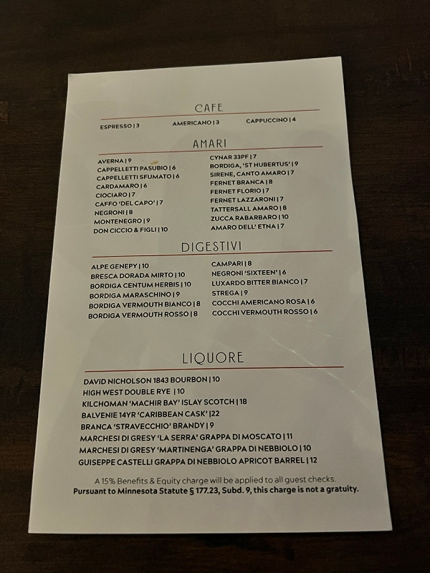 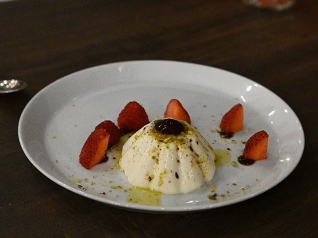 So a meal with some ups and downs. Some of the things that went wrong are probably down to execution (the cooking of the beef and the lemon sorbet; maybe the excess of acid in the ragu). More generally I’d note that the menu is a bit on the basic side. It’s fine, of course, if a restaurant wants to only put out an edited menu of likely crowd-pleasers but then it’s more incumbent on the kitchen to get everything right.

Ah yes, the pasta confusion. We thought we’d got half-orders of pasta. It was what we’d ordered but the bucatini looked pretty big to us; we chalked it up to midwestern portion sizes. But when the check arrived it listed two full orders. I wasn’t sure which was the mistake (what we got or what we were charged for) and asked and was told we were given full orders. At this point our server remembered that we had asked for half orders and offered to adjust the bill. We said it wasn’t necessary as we’d finished it all. But when he brought the credit card back he had comped us one of the pastas. A nice gesture though really not necessary: if we had in fact gotten half portions it wouldn’t have been enough food.

Even before all this, service was pleasant. I will note though that the meal was inconsistently timed. The first couple of courses came out double quick and then there was a bit of a wait for the mains and again for dessert. We ended up being there 20-30 minutes longer than necessary probably.

Price? With the comped pasta we paid $238 all-in. This included drinks (I added on a glass of a Barbera), tax, the included 15% “Benefits & Equity” charge and an additional 5% from us to bring it up to 20%. The proper price of what we ate and drank without the comp would have been closer to $260. Even at $238 that’s just short of $60/head for two adults and two children. About $10/head more than we paid at Mucci’s but we liked the food better too. And certainly far better than our dinner at Luci Ancora where we paid $63/head. I bring those two up because even though we liked this meal better than both of those, it seems to us that that’s the league Terzo is really in. Bar La Grassa was marginally more expensive at $63/head but was better across the board. And 112 Eatery’s $67/head begins to look like a proper steal when you consider that the true per head price of this meal without the comp would have been $65.

Still, not a bad meal by any stretch of the imagination and it’s not unlikely that we might check out Broders’ Pasta Bar at some point (unless enough people warn against doing so). And do feel free to make recommendations of other Italian places to check out with the boys. Italian Eatery? I’m not sure if Hyacinth is a good fit for them.

Okay, what’s next from the Twin Cities? Well, we are scheduled to dine at Alma yet again this week….And maybe I will actually make a push to finish up my Hawaii posts and get started on my Ireland reports this weekend.