As per Whiskybase, there have been 44 casks of Blair Athols from 1988 released in the last three years. I guess someone acquired a huge parcel of those casks and sold them on. And given that most of the releases are from Signatory, I’d guess they’re that someone and are the source for many of the other indie releases as well. Given that there were a decent number released just last year, I suspect we’ll continue to see Blair Athol 1988s for a while.

I’ve previously reviewed three other 1988s in the 25-26 yo range. I very much liked this 25 yo from van Wees and this 26 yo from Signatory for K&L; this 26 yo—also from van Wees—I liked a bit less. The one I’m reviewing now was bottled by La Maison Du Whisky, the famed Paris whisky store. It’s part of their “Artist” series—all of which have very pretty labels. As to whether the prettiness of the labels says anything about the contents of the bottles, I don’t know; I do know the bottles are pretty expensive. I didn’t pay for a whole bottle of this one; this was part of a bottle split—which is really a very good way to try a lot more whiskies than would be feasible otherwise. Anyway, let’s see if this is as good as the others.  END_OF_DOCUMENT_TOKEN_TO_BE_REPLACED

The only Glencadam I have reviewed so far is also a 21 yo—this from Blackadder. This one is the official 21 yo. I don’t really know much about Glencadam—it’s another of the distilleries whose output I have tasted very little of—and so I can’t really speak to its general profile. I bought a bottle of this 21 yo in the summer of 2012, along with bottles of the 10 and 15 yo. I’d planned to organize a blind tasting of the three but here I am almost four years later and I’m yet to open any of the bottles; this is what happens when you buy too much whisky (this review is of a sample I got from Michael K—who presumably purchased a full bottle at some point: his own review is of a purchased sample. Man, this is a complicated parenthetical aside). I have recently opened another, much older, independent bottling so maybe I’ll get around to doing that vertical at some point soon after all.  END_OF_DOCUMENT_TOKEN_TO_BE_REPLACED 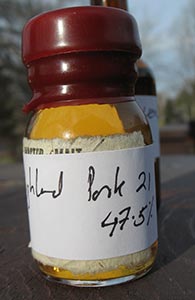 This Highland Park 21 was first released in duty free stores in 2007 and was very reasonably priced. Passing through Heathrow in late 2009 I sampled it early in the morning at World of Whiskies and made the mistake of trusting a palate soured by travel unease: in short, I did not purchase it. Later, I got to try a sample again and liked it much, much more and kicked myself. By this time it was available in regular retail but had been brought down to 40% abv. The current version (unavailable in the US) is back up in strength but it now costs quite a bit more than it originally did. I tasted the current version at a celebration of sherried whiskies in St. Paul earlier last year and it’s still very good. This sample, however, is from the original release.

Nose: Oranges, milk chocolate, a little caramel and a whiff of smoke. With time there’s honey and apricot and maybe a hint of peach as well; and the orange seems to take a turn towards lemon. Some toasted wood emerges as well along with honey. Wonderfully integrated and the notes intensify with time. Water doesn’t do anything worth mentioning. END_OF_DOCUMENT_TOKEN_TO_BE_REPLACED