As area foodies well know, Grand Szechuan started up when the original chef of Little Szechuan, Chef Luo, left that establishment with pretty much the entire kitchen staff. This was a number of years ago now. Little Szechuan used to be the best in town until then and then went into the toilet for a while. It recovered later with a new chef who put some interesting items on the menu but it’s been up and down for the last couple of years (I suspect there has not been stability in the kitchen). In the last year and a half we’ve had some very bad meals there (we go food shopping in the near vicinity); but our last meal–a couple of months ago–was not bad. Grand Szechuan, however, has been a model of consistency since it started up, despite the opening of a second branch elsewhere in the suburbs.

As I’ve said before, even Grand Szechuan cannot compare with the best of the Sichuan restaurants in the San Gabriel valley outside Los Angeles. What I’ll stress now though is that it is impressive that it is as good as it is. There is not a huge Chinese population in the Twin Cities (though it’s not a negligible one) and the majority of Grand Szechuan’s business is from people ordering off the American Chinese section of the menu. A senior member of the staff—we eat there a lot—tells me that at weekday lunch more than 95% of the orders are from the familiar lunch specials part of the menu, and that it’s only at dinner and really the weekends that they’re asked for very many of the Sichuan dishes. Given this reality it’s remarkable that they offer as large a Sichuan menu as they do and that it’s as good as it is (even if a lot of the really esoteric stuff on offer in the SGV is not here). They could quite easily get by without making too much of an effort; god knows most of the dim sum places do (I’m still scarred by our last outing to Mandarin Kitchen).

We’ve eaten up and down the menu and, thanks to our long history with them, also off the menu. We’ve organized birthday banquets there, and both our boys have been eating their food since they could eat solid food. Along with On’s Kitchen they most consistently give us food we love to eat (and the only haute restaurant that we find as reliably good is Alma).

What follows is not a meal review as such but an overview of some of our favourite things to eat there. If you haven’t been (and even now we know large numbers of people who haven’t) you really should go, and you really should explore the menu. If you’re not known to the staff you’ll probably have to ask for the food to be made really hot if you want it that way (this is Minnesota after all). The staff are friendly and happy to guide people (though there is one dude who’s gotten into actual fights with customers two out of the last three times we were there–he does seem to reserve his aggressive behaviour only for Chinese customers).

Click on the thumbnails for a slideshow with detailed descriptions. 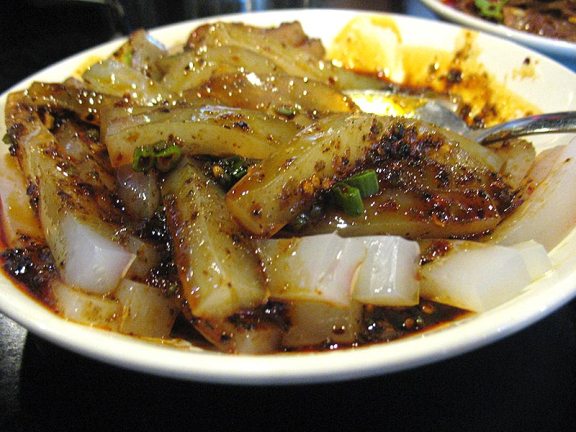 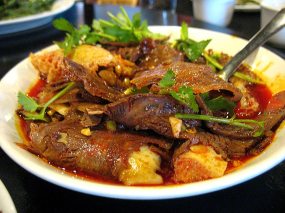 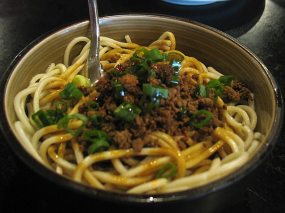 Dan Dan Noodles: Another classic and another of our boys’ favourites. 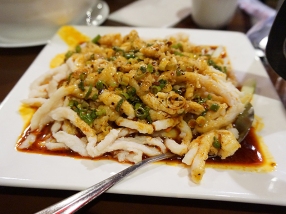 Spicy Hammered Chicken: Another of our very favourite appetizers. Shreds of cold chicken with shreds of cucumber in a dressing heavy with the chili oil and Sichuan peppercorn. 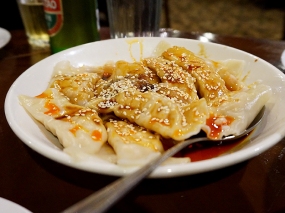 Chengdu Spicy Dumplings: These are from the “Sichuan Snacks” section at the back of the menu and are very good.

Chung King Chilli Chicken: Not everything at Grand Szechuan is great. This is one of their more blah dishes. 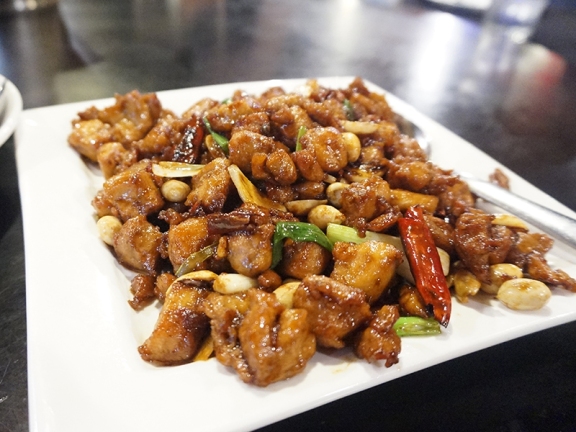 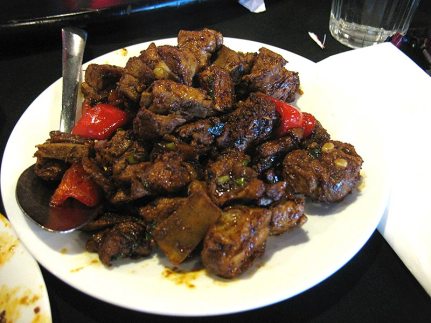 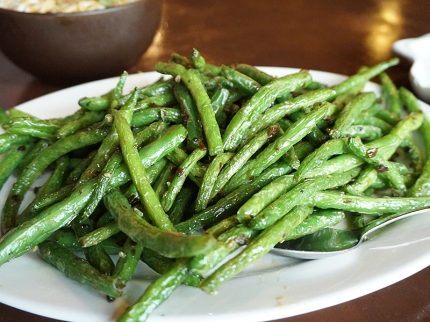 Stir fried Green Beans: Our sons eat these like they’re made of crack. Always very good.

War Bar Combination: A mild dish that involves shrimp and a mix of meats in a hot sauce poured over puffed rice. We got this at a recent meal with friends–I thought it was just okay but it’s a good relief dish if you’ve ordered a lot of spicy stuff.

Steamed Fish with Ginger and Scallions: An off-menu dish recommended for our boys and it’s always great.

Three Flavour Squid: This made its debut in Feb 2012 as part of the Chinese New Year menu and has stuck around. Not always available but at its best is among the five best dishes available in the Twin Cities. 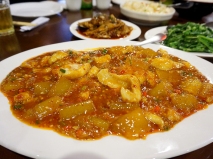 Fish Fillets with Bean Jelly: Another of the 2012 New Year’s menu holdouts. Always great with a bright. acidic heat and depth from the bean sauce.

Walleye in Spicy Brown Sauce: crisp walleye in a pool of a wonderful sweet and spicy broad bean sauce.

Hmmm posting these pictures has made me hungry. We’ll have to try and get another lunch in here before we leave for India!

One thought on “Grand Szechuan”