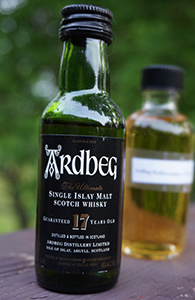 Continuing an unplanned mini-run of discontinued Islays in their late teens, here is the Ardbeg 17, which was, I believe, the first release from the distillery after it was purchased by the Glenmorangie group in 1997. It was discontinued in 2004. I got this miniature in an unlikely swap. A fellow whisky geek offered it in exchange for the tin of a Port Charlotte PC9. I was only too glad to take him up on it. I can’t be bothered to squint for the bottling code, but this is a 43% bottling for the US market and as per the Ardbeg Project there was only one release of the 50 ml miniature in the US and that was in 2000 (well before I’d ever heard of Ardbeg). I’m not sure how much production was happening right before the 1983 closure of the distillery (it reopened in 1989)–it’s possible that this is from even older distillate. It is certainly the case that those who bought the 17 yo released in 2004 were getting much older whisky.

Nose: Very mellow, with stony sweetness (clean, wet stones) and vanilla and a briny coastal air. Just the faintest hint of smoke. No phenols to speak of. Gets a little buttery with time, and then a phenolic note does begin to emerge along with a bit of lemon and then some apple. Gets brinier (and even a little sweaty) as it sits and also peatier and more acidic. With a drop of water the lemon gets more musky and melds with the apple.

Palate: Sweet arrival but then here’s the smoke–ashy and dry; still not terribly phenolic. Very nice texture for 43%. Smokier still on the second sip and the smoke mingles nicely now with the stony sweetness. Not much acid on the palate. With a lot more time and air the acid begins to emerge on the palate too but it’s less obviously fruity here. And the smoke is now less ashy and more reminiscent of coals in a cast iron stove (not that I’ve licked very many). With even more time the acid is clearly lemon and there’s an earthy/milk chocolatey note too. With water the earthy notes recede but now there’s very bright lemon with tingling sweetness and ashy smoke.

Finish: Medium-long. Quite ashy. Water keeps the lemon going longer on the finish.

Comments: Remarkable how much more smoky this is on the palate than on the nose, where it seems almost unpeated. I wonder what this would have been like at the 46% that became standard with the Glenmorangie releases later in the decade, but, as it is, this is very drinkable and pleasurable, and it really rewards patience (and I wish I’d added water earlier). Still, unless you’re a late-blossoming Ardbeg fanatic with money to burn I don’t think there’s any reason to pay the hundred of pounds being asked now for the few remaining bottles (originally this was £40 or less, I think).

And reading my notes for the Caol Ila 18 (the review was posted yesterday but the notes were taken more than a week ago) I see that they’re quite similar. However, I liked this one more. I wish I’d tasted them side by side so I could have articulated the differences. As it is, it is probably not clear why I’m giving this a higher score. The development is more interesting here and there’s greater balance, with more mellow smoke and less vanilla than in the Caol Ila 18.