The few Twin Citizens who read all my local food/restaurant write-ups are doubtless sick of my moaning endlessly about the general quality of Asian food in the area. I’m sure I come off like a poseur who wants everyone to know that he knows better than everyone else; or, worse, like an insufferable jerk who wants people to feel bad about what they enjoy. Now I don’t deny that I am an annoying bastard (see the title of this blog) but my version of events is that a) when it comes to most Asian cuisines I have a frame of reference (a decade in Los Angeles and regular visits every year since) against which almost everything in Minnesota pales*, and which I am not willing to let go of to make my gastronomic life here seem better than it is; and b) I do want things to get better and hope they can, and I don’t think overpraising the mediocre or muting criticism is going to get us there. Please bear in mind that I do not have this attitude towards our fine dining scene. We now have a number of restaurants in that genre that would be competitive even in the major metros. But this is just not true when it comes to Asian food.

We have two Thai restaurants that are quite good on their day (On’s Kitchen, Bangkok Thai Deli) and a large number that are mediocre at best. We have acceptable if entirely predictable Vietnamese food. We have sub-standard Korean food. Ditto for Japanese. We have more decent Sichuan options than we can probably expect but even the best of these (Grand Szechuan) would be second-tier in Los Angeles or New York on their best day. We have no other regional Chinese food worth mentioning.

And our dim sum situation is rather sad as well. Of the three viable options that were around when we got to Minnesota in 2007, Jun Bo has closed, leaving Mandarin Kitchen and Yangtze as the choices. Which, if you’ve eaten a lot of Dim Sum in places with large Chinese populations, is not the happiest state of affairs.

Now you wouldn’t think this if you went by the local reviews. See, for example, this recent glowing report by the usually reliable Dara Moskowitz Grumdahl**. I’m sorry to say it but the Twin Cities dim sum scene does not deserve high praise and Mandarin Kitchen, which gets a lot of that high praise in that write-up, is just not very good. (See also this very positive review of Mandarin Kitchen from a couple who are promoting “Ethnic Eats” in the Twin Cities.) Unreliable as such evidence is, I offer the following representative pictures to support my case. They were all taken during the heart of Saturday morning service. Click on a thumbnail if you dare:

Now, as I’ve acknowledged and said in other places, I do get that in smaller cities the food writers are generally closer to the sportswriters in their orientation (“go home team!”) than to cultural critics; but Moskowitz Grumdahl, in general, can be quite critical in her reviews of fine dining restaurants. I’m not sure if she just doesn’t have the same kind of frame of reference when it comes to dim sum–she does make reference to dim sum experiences in San Francisco and New York; or perhaps she, like some of my friends who should really know better, is operating on a principle analogous to Dr. Johnson’s observation that what is remarkable of a dog walking on its hind legs is not that it is done well well but that it is done at all.

Now if you live in the Twin Cities and like Mandarin Kitchen you will remind me that it is always crammed for dim sum on weekends. My flip response is that so is Olive Garden for Italian food. My real response, however, is that without passing judgment on the tastes of hundreds of strangers I will note that sometimes C+/B- dim sum is better than no dim sum at all, and if you’ve not had better dim sum it may seem better than it is; however, if you have had much better there is no reason to behave like it is B+/A- dim sum.

There is however reliable B dim sum in the Cities and that’s at Yangtze in St. Louis Park. Alas, as we live one hour south of the cities it is a bit of a hike for us, and, like Mandarin Kitchen, the cost is way out of proportion to the quality; and so unless we have guests in town, or friends who really want to go, or we’re a long way away from our last/next L.A trip we tend to not go there very often either. As it happens, my parents are currently visiting from Delhi (the dim sum options there make Mandarin Kitchen seem like one of the better Hong Kong houses) and as they’re big fans of any kind of dim sum at all we always take them to Yangtze. So it was last weekend. Please click on a thumbnail to launch a slideshow and read descriptions of what we ate.

(By the way, Yangtze is also usually very crowded for dim sum. If you arrive before 11, however, you have a very good chance of not waiting very long at all; and at any time if you have a group of eight or more you can reserve a table and just walk in.) 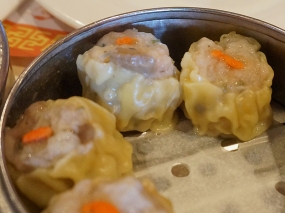 Yangtze: likewise for the pork shiumai.

Yangtze: These shrimp dumplings were quite nice. 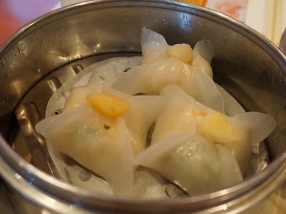 Yangtze: But these scallop dumplings were a little dry.

Yangtze: The shrimp and chive dumplings were quite good though.

Yangtze: We were seated right by the steamer area and got the Chinese broccoli/gai lan fresh out of the steamer–it was very nice. 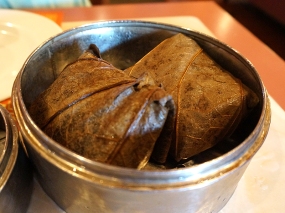 Yangtze: The sticky rice was fine.

Yangtze: Compare with the far drier iteration from Mandarin Kitchen. 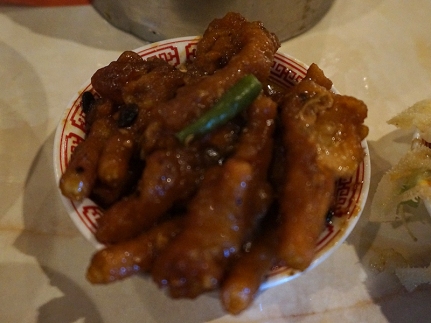 Yangtze: The chicken feet were likewise superior to the ones at Mandarin Kitchen. 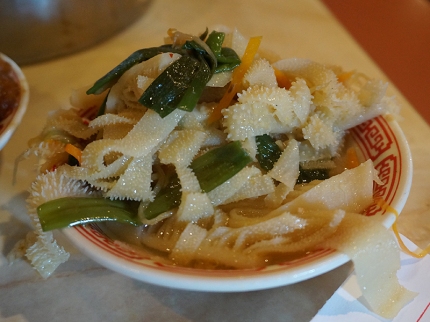 Yangtze: And the gingery, freshly steamed tripe was very good.

Yangtze: We were excited to see these juicy dumplings (aka soup dumplings) on offer, but, alas, the juice had mostly leaked out in the steamer.

Yangtze: We usually get some fried stuff towards the end. The salt and pepper shrimp were acceptable.

Yangtze: As were these crab claws, which had crab mostly in their name.

Though not pictured we also ate some congee, which was okay. All of this with tip came to $136 which is just way too much for the quality. I get that given demographics dim sum in Minnesota is not going to be as good as dim sum in Southern California; but it pisses me off that we have to pay a third as more as we would for much better quality in L.A.

Anyway, this was a decent meal. On the whole, I’d give it a B. I know from experience that Yangtze can occasionally hit higher notes, but they don’t seem to sustain them either. It’s possible, I suppose, that unless demographics change this is the best dim sum we’re going to get here (though I will note that Grand Szechuan gives us far better and far more esoteric Sichuan food while catering to the same demographics). However, I don’t know if we can expect any better if we are already telling each other and convincing ourselves that the scene is so much better than it is.

—
*And, of course, the L.A/SGV scene pales in comparison to Hong Kong. A famous Hong Kong dim sum chef opined on Sea Harbour–which, along with Elite, is at the top of the SGV scene–last year that it would be a decent neighbourhood place in Hong Kong. By the by, I see that I have somehow failed to write up a single one of our meals at Sea Harbour. Must remedy that when I’m in L.A in early August!

**Moskowitz Grumdahl is a beloved alumna of my place of employment and so I follow her work with interest.