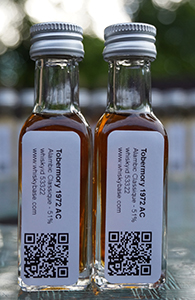 More than a year ago I reviewed an absolutely exquisite sherried Ledaig 40, 1972 from the German bottler, Alambic Classique. I thought that was one of the very best whiskies I tasted last year. Here now is a challenger from the same distillery and bottler: an even older Tobermory (Ledaig, as you probably know, is the name of the peated whisky made at Tobermory). This one is 41 years old and like the Ledaig is also from a single oloroso sherry cask. Even though I deeply regretted not buying the Ledaig when it was released—by the time I tasted the samples I bought it was long gone—I did not spring for a full bottle of this one either: both because it was very expensive and because my few experiences with Tobermory have not been as good as the one I’ve recently had with Ledaig. I’m hoping this tasting doesn’t make me feel stupid (especially as current Tobermory is no basis for making judgements about 1972 Tobermory).

Nose: Earthy notes at first and then come the raisins, steeped in mushroom liquor; quite a bit of graphite (pencil lead) too. After a bit there’s some orange peel as well but, as with its peated sibling, there’s no wood to speak of. Gets more mushroomy as it sits, and the citrus gets a little brighter; a bit of cherry too. Some sharper, slightly suluphury notes emerge with time. The good news is that water pushes those back and re-emphasizes the raisins.

Palate: Leathery notes leading into raisins and earthy, mossy notes. A lot of tobacco too. Sweeter on the second sip—some of that cherry from the nose and then a fair bit of dried orange peel and soy sauce and dark mushroom liqueur (lots of umami). Gets even earthier as it sits. With a lot more time it loses a lot of its oomph and gets a little sharper on the palate too. Water fixes the emerging sulphur on the palate as well, replacing it with more of the cherry and some pine resin.

Finish: Medium-long. Not much change—the fruit slowly tapers off and then the leathery, earthy notes make the last impression again. With a lot of time there seems to be a hint of some ashy smoke on the sides of my tongue. With water the pine resin notes from the palate continue and there’s a menthol coolness as well.

Comments: The nose didn’t slay me, but man, the palate is good! (Though it loses some steam with time.) Just a notch or two behind that superlative Ledaig, which I think more and more I gave a lower score than I should have. Still, at the price I don’t regret passing on a full bottle. Then again, it may get much better as it changes slowly in the bottle. I urge anyone who has a bottle to send me samples drawn at different points in its life.