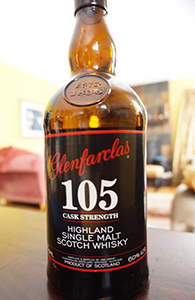 The Glenfarclas 105 is the distillery’s young * whisky—it seems like every distillery has one now—and is more specifically a challenger to the well-loved Aberlour A’bunadh in the “heavily sherried young whisky at a very high abv” category. Perhaps because Glenfarclas have not thought to release the 105 with batch numbers it’s never quite received the cult acclaim of the A’bunadh series. Or perhaps that’s because it’s just a little too young, raw and hot. At least, that was my impression on the very few occasions on which I’ve tried it in the past. Recently, however, some friends and I split some bottles and this was among them. I’m interested to see what I make of it when I’m paying a lot of attention to it.

By the way, as you probably know, the fact that the 105 is always at 60% doesn’t mean it’s ever diluted to reach that unlikely round number. Apparently, Glenfarclas vat casks at higher and lower strengths till they get to 60% (and I assume 105 refers to the proof—57% is abv in the imperial system which probably means 60% = 105%; it may say this on the bottle but I didn’t keep it after the split). So it’s always genuinely cask strength whisky. At least until we find out, Glendronach-style, that this is yet another term that means something very different to the industry from what we think it does.

Nose: Intense sherry, yes, but quite bright—orange peel, plums. Quite a bit of oak too. The wood gets even stronger (and dustier) as it sits but there’s some other sweet fruit too now (apricots?) and spicy notes that actually call high-strength bourbons to mind. With water the wood gets pushed back and there’s much better balance now. The sweeter fruity notes comes out to the top: plum sauce and yes, apricots; there’s also something floral.

Palate: As on the nose, it’s obviously sherried but not in the usual raisins and caramel way. Again it’s brighter notes of dried orange peel that make the strongest impression, and, again there’s a lot of wood. The sweeter notes from the nose are not much in evidence here. The citrus gets brighter with time—more lemon than orange. But I think this is going to need water to pull out anything else that may be hiding in here under the wood. Water pushes back the wood on the palate too—though not as much as on the nose—but I’m not sure that anything new emerges as such (maybe a bit of toffee?); instead the wood becomes more palatable and more spicy (clove, cinnamon). Much nicer mouthfeel now.

Finish: Long. The citrus and wood slowly wash out and it gets quite salty at the end, leaving me finally with taste of rusted iron/blood in the mouth. Even with water there’s a fair bit of wood on the palate.

Comments: I quite liked the nose but there’s not a whole lot of interest on the palate. And, especially without water, the wood is just a bit too strong for my liking, especially on the finish. Maybe I didn’t get the water right. As is, I wouldn’t turn down a pour but this doesn’t make me want to buy a full bottle any time soon. If the next pour isn’t any better the rest of my split is probably headed into a home-blend. Advantage A’bunadh.

*Apologies for my laziness in not even bothering to turn the bottle around while pouring out the shares and then photographing it (I have a general lack of interest in distillery-blather on labels). Feedback after I made the post indicates this is probably actually 10 years old; the friends who took the bottle itself are out of the country—I’ll ask them to take a look at their bottle when they get back early next week.