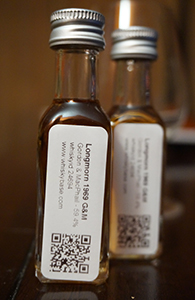 This is the the oldest Longmorn I’ve yet tasted. I referred to it in my review of the 1968-2004 from Scott’s Selection as probably the last Longmorn of this age and era that I will get to taste. This one is from Gordon & Macphail and was bottled for van Wees in the Netherlands. I couldn’t spring for a full bottle but also couldn’t resist paying for two 20 ml samples when the good people of Whiskybase made them available. As the samples were not themselves cheap I hope this one will live up to the standards of the other ancient Longmorns I’ve had.

I think this one might be different though from the others of its age/era that I’ve tasted in that it’s from a first fill sherry butt. I don’t believe the G&M 40, 1971 (the previous oldest Longmorn I’ve had) was from first fill sherry, and I don’t believe any of the Scott’s bottles are either (Scott’s Selection, of course, very rarely specified the type of cask their releases were from).

Nose: Dark orange marmalade, dried tangerine peel, fig jam, apricots. Below that there’s some leather (old books), and just a bit of wood. After a minute there’s some brighter citrus peeping through (lemon) and some fried plantains as well. Just a bit of roasted malt too. Just lovely. More tropical fruit as it sits—mango leather with salt (an Indian thing)—and some dark maple syrup as well. With even more time it gets quite sticky with the fig jam mixed in with some heavily reduced plum sauce. With water it’s brighter with more honey, but also more brightly tropically fruity: straight up mango now and makrut lime peel. And now there’s toffee and milk chocolate as well.

Palate: Colossal. The roasted malt makes the first showing but then the fruit starts expanding and expanding and expanding. Everything from the nose is here and it’s even more intense. As on the nose, it brightens as it goes and picks up some salt on the way. On the second sip the fruit is the first to arrive and now it turns tropical quite fast with mango, guava and overripe pineapple. The roasted malt and the wood now provides the frame for the fruit and there’s some roasted spices too (cumin and a hint of cinnamon). Insanely drinkable and expressive at full strength. A few more small sips and I’ll add some water. As on the nose it gets stickier and sweeter as it sits (think brown sweetness: melted jaggery). Somehow brighter and even stickier with water. More pineapple now but ringed with burnt sugar.

Finish: Long. Forever long. Nothing new develops but all that insanely good stuff from the palate slowly fades out. Maybe picks up a little more salt as it goes. With water there’s much more lime on the finish but those tropical notes have the last word.

Comments: How does barley turn into this? Alchemy is real.