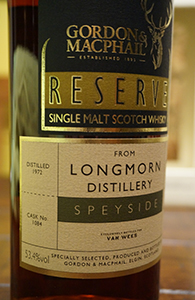 In December I reviewed an ancient Longmorn bottled by Gordon & MacPhail for van Wees in the Netherlands. I gave that one, a 42 yo distilled in 1969, 95 points, my highest score yet. That one was from a series of single first fill sherry casks which also included one from 1964, one from 1966, one from 1968 and one from 1972—all bottled together in 2011.

Somehow these bottles have stuck around for almost four years. How this came to be I don’t quite understand, but as of now word seems to be fully out on them and the few stores that still have bottles have raised the prices dramatically. This increase has apparently come down from van Wees, who seem to be belatedly trying to make money on a series they had trouble selling out at the initial lower prices (that or they held some stock back in the hopes that they’d eventually be able to charge a lot more).

After tasting that 1969—my review was from samples I’d purchased—I went out and bought two bottles (this was before the spike in the price), one for my 50th birthday and one to save for my boys when they come of drinking age (that’s the plan anyway). And along with some friends in the area I purchased the rest of the set. There were four of us, and for the price of one expensive bottle we each had a fourth of all four. I tasted my split of this 1972 almost immediately and quickly purchased a full bottle (this was right after the prices had shot up at Whiskybase and elsewhere but another store in the Netherlands still had a bottle at the original price).

All of this represents a decadent splurge, admittedly, and one that that I could not have seen myself justifying just a couple of years ago (hell, just a year ago). But given the declining stocks of older whisky (especially from this era) on the market, and given the way prices are surging, the original prices asked for these bottles (all in the 400 euro range or slightly below) actually seemed reasonable. And having accumulated a large number of bottles over the years (mostly unopened) I’m now at a point where I’m trying to buy much less; not spend less, mind you, but trying to buy better for the same money. Frankly, I wish I’d made this decision four years ago when more whisky of this class was available for what now seems like unbelievably low prices. Now it’s all almost either gone or priced out of my reach (I couldn’t justify the prices being asked now for these Longmorns either). Meanwhile, the solid but not all special bottles that crowd my shelves are still available now.

Anyway, I am very glad that I get to drink these at any rate. There are very few still available whisky pleasures as intense as those presented by old Longmorns from quality casks.

Nose: Lighter than the 1969 but not light per se: raisins, honey, tangerine peel, leather (both fruit leather—mango—and actual leather). Slight notes of pine too and quite a bit of polished oak. The citrus gets more pronounced as it sits; but it also gets more cough syrupy. With more time some plum jam pokes through and there’s also a note somewhere between smoke and roasted malt. With even more time overripe bananas appear (well, the aroma appears) and some toffee as well. Water integrates the notes but I’m not sure that’s a good thing here. It does also pull out more of the sticky notes: toffee, some caramel.

Palate: Sharp citrus at first and some peppery oak and then the fruit bomb goes off. There’s shrapnel everywhere: shards of orange, mango, papaya, lemon, kiwi. On the second sip the wood goes from peppery to polished. Imagine a polished old oak table rubbed with the juices that have dripped from a basket of over-ripe tropical fruit. The fruit gets richer with every sip. And in the background there’s caramel and toffee. Absolutely drinkable at full strength but in the interests of science let’s add some water. Water emphasizes the brighter notes and tamps the rest down.

Finish. Long. The wood really comes out here—it’s not offensive or an off-note in any way but it’s very clearly present. As the explosion of fruit begins to slowly subside the papaya comes to the fore but it’s the brighter notes that remain the longest. And the wood provides a drying frame for it all. After a bit there’s a touch of cocoa powder and some herbal, rye-like notes. Less wood with water but it has the effect of making it seem more simple.

Comments: Excellent stuff; maybe if I didn’t have that glorious 1969 in mind I’d love it even more. And I have to say I can totally imagine some people preferring the brighter profile of this one. It’s excellent whisky by any estimation; just not transcendental in my view. And I’m drinking the rest of my split without water.