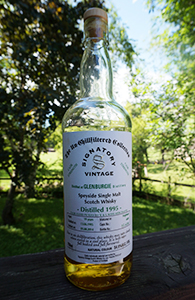 Here is another of K&L’s exclusives for 2014. This is another cask strength bottle from Signatory wearing the livery of their 46% UCF series. This is from Glenburgie, a workhorse distillery from the Speyside that produces malt for Chivas Bros.’s blends, in particular for Ballantine’s. It’s a distillery that flies under the radar but their malt can be very good indeed. In fact, one of the malts that spurred me to further exploration of releases off the beaten track was a 500 ml bottle of Glenburgie from Chivas Bros.’ Cask Strength Edition series. That was a 15 yo, 1992 that I reviewed not too long after starting the blog and I already know that this one is not quite in that class: I opened it for one of my local group’s tastings a couple of months ago. That’s not to say it’s not good, however; we all liked it a lot. In fact, at the time I liked it more than the Signatory/K&L Glen Ord 17 that was released at the same time—and that one improved by the time I got around to reviewing it. Will the same be true of this one? I hope so.

Nose: Butterscotch, honey, toasted oak, brown butter, mild toffee, cream. The butter-cream-toffee complex turns to butter crust pastry fresh out of the oven. After a minute or so the fruit begins to emerge: apricot jam, hints of orange and then some lemon peel. With time the citrus expands quite a bit.

Palate: Sweeter arrival on the palate with some honey and then musky, peppery fruit (melon) and some malt. The oak expands on the second sip. With even more time the musky thing gets borderline tropical with hints of papaya but there’s a slightly metallic note as well now. Let’s see what water does. Well, it makes it sweeter (berries and cream now) and pushes the oak back.

Finish: Long. The musky, peppery fruit keeps going but so does the metallic note. Gets sweeter and creamier with time. As on the palate with water (the metallic thing is gone now).