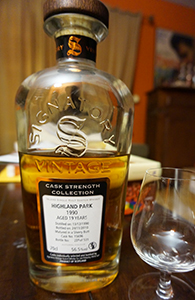 I purchased this cask strength Highland Park 19, 1990 from Signatory a long while ago with the express purpose of comparing it with this marvelous OB 19 distilled four years previous. I finally opened it last year but I still haven’t gotten around to the head to head comparison. This is because I only just remembered that that was why I’d purchased it. Isn’t getting older so much fun?

That’s all I have by way of introduction, I’m afraid.

Nose: It’s a bit tight but with my nose deep in the glass there are dark sherry notes to be found: raisins, orange peel, toffee edging into fudge territory. Some leathery oak as well. Something farmy/leafy too (and is that a whiff of peat?). Water should open it up nicely. With more time the sweeter notes mix with savoury and there’s a mild inkiness too. The apricot that emerges late on the palate shows up on the nose too along with some maple syrup. With a few drops of water the sweeter fruit are emphasized and there’s a light dusting of cocoa powder.

Palate: Brighter on the palate (lemon peel) and there’s just a bit of rubber as well. Gets saltier as it goes. On the second sip the salt is front and center; the rubber has turned into savoury gunpowder (not very much of it) and the sweeter notes are lurking underneath. The salt recedes with time and the citrus expands bringing some apricot, some light caramel and some resinous notes with it. Much nicer now. Gets sweeter still with time. With time and air this is very drinkable and expressive at full strength but let’s add some water. Ah…the apricot expands and picks up some honey and marmalade. Much richer now.

Finish: Long. The citrus and salt fade out slowly. No new development at first but later it’s as on the palate—the mild rubber emerges again at the end.

Comments: Starts out a little slow on the palate but, neat, this becomes like a less mellow, brighter and slightly less well-balanced version of the OB 18; much richer and fruitier with water. Probably not for the utter sulphur-phobe but this is nothing like the Dark Origins on that front. I preferred it with water.