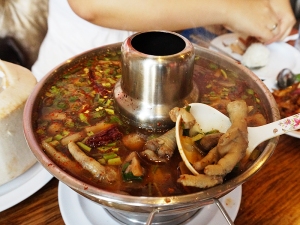 I ate at Isaan Station twice on our last trip to Los Angeles. On neither occasion was I accompanied by the missus and kids and I was thus resolved that we would go back together on this trip (it also helps that Isaan Station is in Koreatown and not Thai Town). While they do not have the dish that the boys are guaranteed to eat (chicken/pork satays) I knew they (and the missus) would love their wondrous grilled chicken and/or any of the other grilled meats; and that the missus would, at a minimum, also love whichever earthy, spicy soup we got. So it proved to be.
I don’t really have very much to add to my description of the restaurant (still cash only) or by way of introduction to Isaan cuisine (my knowledge of it has not gone past the miniscule level it was at 7 months ago)—so let’s get quickly to the food.

You’d think I’d have learned my lesson from the second meal on the previous trip, when both Michael K. and I were almost killed by the bamboo salad, but no: we asked that everything that should be hot be made Thai hot. The waitress looked at us dubiously and shrugged her shoulders as if to disclaim responsibility. Was she right? Well, let me say that for me it was both an excellent meal and a great facial and scalp cleanse; and even the missus, who is usually unperturbed by very hot food, almost met her match in the soup (which almost killed me).

For what we ate click on an image below to launch a larger slideshow. Descriptions and comments are in the captions in the slideshow, and more comments on the meal are below it.

This Isaan style papaya salad with rice noodle was the first thing we asked for to be Thai hot and the waitress warned us that it would be very hot. Well, it was quite hot (and also very good) but it was almost a relief dish alongside the…

…Tom Super which was entirely lethal. Made with chicken feet, it was also bloody good. After my first bowl, by which point pores in parts of my body that I did not know had pores had opened up, I filled up another but had to wait twenty minutes before I had the courage to go in again.

It also rendered tame by juxtaposition the nahm dtok with pork (redder and saucier than most other iterations I’ve had in non-Isaan restaurants). I don’t mean to suggest that this was mild in the abstract—the leftovers I had for dinner were plenty hot; it’s just that after/alongside that soup it didn’t seem so lethal. This was also very good, by the way. 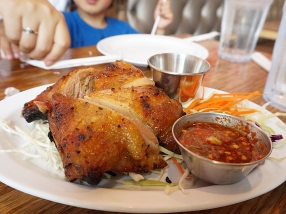 Fortunately, the turmeric-marinated grilled chicken is entirely mild (unless you involve the sauce) and so the top of our heads did not entirely come off.

And the sour, deep-fried pork rib is quite mild too. Both it and the chicken were great. 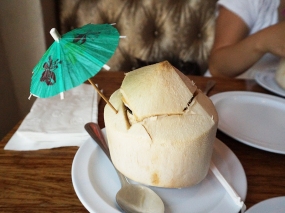 A jaunty young coconut is essential with this food (well, I guess it doesn’t need to be jaunty). You need the water and the cold flesh to battle the flames.

We got 2x of the chicken, as the boys wolfed down the first plate before we could get much of a look at it (so much for filial piety). All of this came to about $70 before tip and we took leftovers home (driving with the container of that soup was reminiscent of the last time I drove a truck laden with nitroglycerine over a mountain in South America).

Highlights? Well, everything was a highlight, really but I’ll praise the chicken again. And while that lethal soup was not quite as excellent as the tom saab kra dhook moo I ate at my first meal in December it was bloody good as well. All three of their seven soups that I’ve had so far have been bloody good. Is there a dud on there? I dunno. Oh, and the fried pork rib blew out of the water the version we had at St. Paul’s Bangkok Thai Deli last month (I haven’t posted the write-up of that meal yet).

Well, I do need to branch out from Isaan Station for Isaan food. Lacha Somtum in Thai Town is on the list. Hopefully, we’ll make it there on this trip; if not, next time for sure. Any other nominations for Isaan food in Los Angeles? Night + Market?