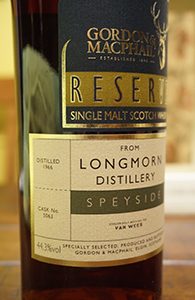 This is the fourth of the five ancient Longmorns bottled by Gordon and MacPhail for van Wees in 2011. I’ve previously reviewed the 1972, the 1969 and the 1968. All were excellent, and the 1969, in particular, I thought was magical (I’ll probably review the 1964 next month). I have very little to add to what I’ve already said in my preambles to those reviews (and I really want to duck the question of the financial irresponsibility and likely decadence of buying such expensive whisky, even in the form of a four-way split) and so let’s get right to the notes.

Nose: Dark rich fruit: fig jam, reduced plum sauce, marmalade with apricot; some leather as well. After a minute there’s an expanding note of dried orange peel mixed in with some honey and polished oak. Lovely but there’s not much depth to it. After a couple more minutes there’s a faintly mossy note under the fruit. After a lot of time there’s a bit of tobacco and it gets stickier (date). With a couple of drops of water there quite a bit of menthol coolness and the fruit wakes back up.

Palate: Much thinner and weaker on the palate—all the stuff that’s first on the nose but with way less intensity. Miraculously not over-oaked but the wood is far more present here than on the nose. The citrus is a little brighter here and there’s a minty coolness too with time. A bit of milk chocolate too maybe. A hint of soy sauce too, maybe, with time. Oddly enough, as often happens, water almost seems to make it richer: the sticky fruit from the nose shows up here too now

Finish: Medium. The fruit doesn’t hang around and the oak is the prominent note (not that it’s woody or tannic). At the end there’s a wisp of wood smoke. Gets mintier as it goes and then there’s some bitterness at the very end. As on the palate with water—less mint now and less wood too.

Comments: Well, this was very nice on the nose to begin but there wasn’t very much happening on the palate that was worth getting very excited about and the finish was weaker still (though both improved with water). No tropical fruit to be seen. In fact, not a million miles from the far lowlier Gordon & MacPhail Glen Grant 21 I reviewed a while ago, especially on the palate. I’m glad I didn’t talk myself into paying for a full bottle of this when we bought it and I certainly would not advise paying the current asking price (which is almost twice what we paid). And I’m drinking the rest of my share with water.

Rating: 87 points. (Pulled up by the nose and by water on the palate.)