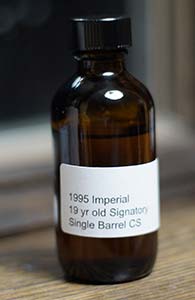 This inaugurates a brief run of reviews of a number of K&L’s recent barrel selections from Signatory. These are all at cask strength—though in the cost-saving UCF bottles—and I believe they may all still be available (these notes are being taken long before this review will be posted and I am probably not going to remember to go back and check: you’re welcome!). I acquired these as bottle splits for the purpose of deciding if I wanted full bottles—my findings may be of interest to you as well.

There are some who make a case for Imperial (another closed distillery) being a bit of a hidden gem but I am yet to have any of its malt that I have found to be particularly remarkable—this includes another Signatory selection for K&L, a 17 yo that I had at 84 points. I am also yet to have very much of its malt so it’s entirely possible that I have not been lucky. Will this cask turn that around? Let’s see.

Nose: Bright and fruity (apple mostly) at first and then quite a bit of honey and biscuity malt; some orange peel below that and just a bit of gingerbread. After a minute or so the citrus gets more pronounced and it’s muskier now; some polished wood and some ripe banana to go with it. Not much interesting change with water.

Palate: Pretty much as advertised by the nose, except less citrussy; a nice, oily mouthfeel and it tastes “heavier” than the abv might suggest. With time the citrus expands here too but a metallic note develops as well that I’m not crazy about. Let’s see if water fixes that. Well, water does knock the metallic thing back a bit but it blands out the rest as well.

Finish: Medium. Some pepperiness here and then that metallic note shows up and hangs out a bit too long. As on the palate with water.

Comments: The nose was the best part but this was solid on the whole; not remarkable, no, but solid—and would have been better but for that metallic note on the palate and finish. I wouldn’t pay the asking price though (currently $100). If this review intrigues you (score aside) I’d recommend waiting to see if it gets discounted. If that means you end up missing out on it then so be it: there’s plenty of this Speyside profile available still from other distilleries that are still on the go.