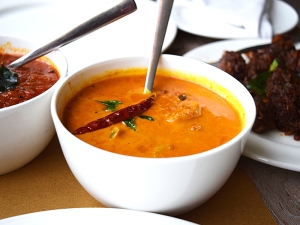 Coast Cafe is the restaurant I referred to at the end of my review of my quite good meal at Mahabelly. It is, unfortunately, located in the hellhole that is Hauz Khas Village but presents a good argument for going there during a weekday. (There is, however, no argument for going to Hauz Khas village on a weeknight or on the weekend; and especially not on weekend nights.) It is a small restaurant operated by Ogaan, a company I’d always thought was entirely in the lifestyle magazine racket but apparently now also has a range of clothing stores and at least one restaurant. Coast Cafe is that restaurant and is situated on the two floors above the Ogaan shop. Oh yes, another point in Coast Cafe’s favour is that it is located at the very entrance to the hellhole that is Hauz Khas Village and so you don’t have to go very far in. I met another old friend there for lunch and despite my hatred of Hauz Khas Village and reservations about aspects of Coast Cafe’s menu I enjoyed the food very much indeed.

It’s a very nice space too. The entrance is off to the side of the store. You can ascend via lift or stairs. We took the stairs which are narrow and winding and not for those with knee issues. The first floor dining room has a very nice patio but the interior is a little dark. The patio looked attractive to me but my friend was done up for Delhi’s mild January the way I’m usually dressed for January in Minnesota and so we went up to the upper dining room. And that room is very nice indeed: large, bright and airy (it has a smaller patio too) with lots of striking contemporary art on the walls.

I was also very glad that we picked this room for another reason: a few minutes after we’d sat down three women sat down at the table next to us, all of whom looked familiar. After a moment I realized they had all been at Delhi University with me, in my year in my college and we’d known each reasonably well (and one of them I’d been quite friendly with). We hadn’t seen each other since graduating college in 1991 and it was great to catch up with them over tea after lunch (my companion had to rush back to his work). Delhi really is a very small town for the upper/middle class Westernized elite.

Anyway, on to the food! At this point in the trip leftovers were piling up in my mother’s fridge and her complaints about our not eating enough home cooking were rising in proportion, and so I showed more restraint than usual, ordering only one starter and three main courses for the two of us. And here I come to my reservations about Coast Cafe’s menu. It is in fact bifurcated. One half of the menu features tacos and satays, burgers, pastas etc.; the other features a relatively abbreviated list of Kerala dishes. Why do I have reservations about this? Well, only because the Kerala stuff is so good that I wish they’d commit fully to that and leave the “multi-cuisine” stuff to the 1000 other Delhi restaurants that do it. Only minor reservations, I guess. And I have to admit that the smaller size of the Kerala section of the menu may have something to do with how well it was all executed (well, almost all of it).

For what we ate, as usual, see the slideshow and captions. 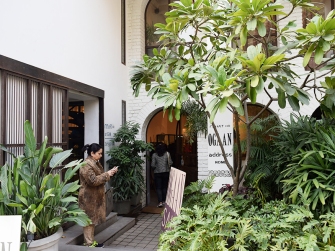 The entrance to the shop and restaurant (off to the side). 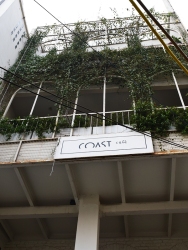 The restaurant takes up the top two floors. 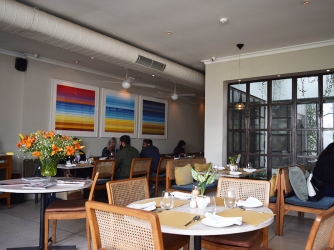 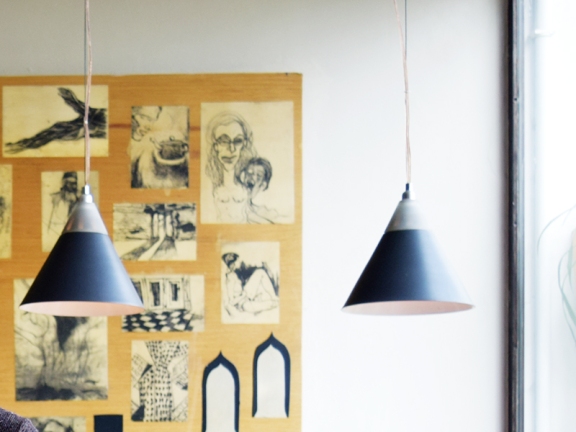 Lots of modern art on the walls. This wall behind us sported some striking sketches. Due to people milling about there when I finally got around to taking pictures I can only show you this one corner. 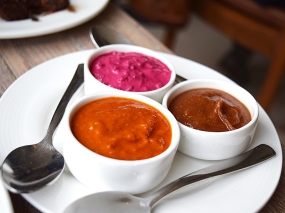 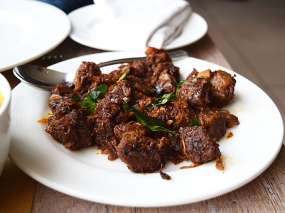 Excellent dry fried mutton. This may have been even better than the similar dish at Mahabelly. 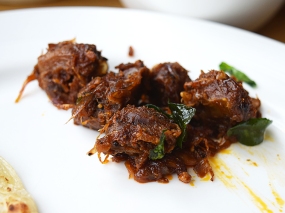 This was just excellent. Wonderful depth of flavour and balance of sweet, spicy and sour notes. 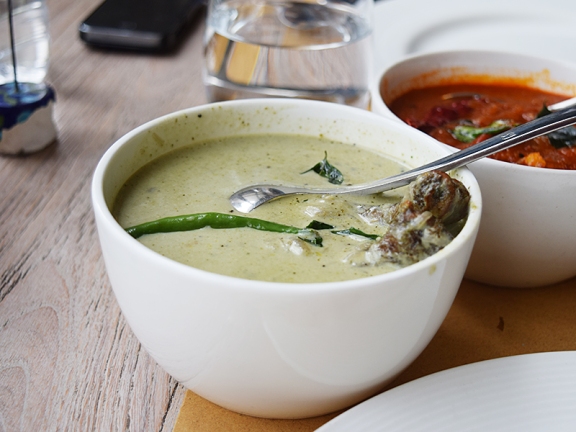 This stew was not quite at that level. I am inclined to blame the fact that they seem to have inserted grilled chicken into the stew. 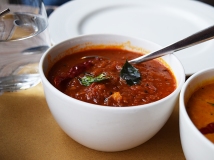 However, this spicy red curry of snapper was excellent as well. Hot and sour. 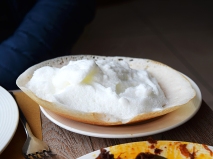 My friend got an egg white appam. It was striking to look at and he liked it a lot but I prefer regular appams. 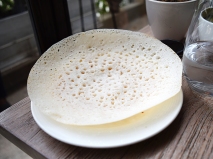 And theirs were better than Mahabelly’s but not as good as Dakshin’s. 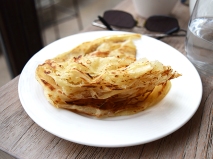 We didn’t get dessert as my friend had to dash. I sat down with the three old friends at the other table to catch up (they all have college-aged kids; how did I stay so young?) and had some tea with them: an interesting smoked Darjeeling tea of some kind.

All of this, minus the tea, came to about Rs. 3000 all-in (about $44, or $11’ish per head for the amount of food we ordered). More expensive than Mahabelly for about the same amount of food but rents in Hauz Khas Village are higher. And while they don’t have as much on the menu here as at Mahabelly, I did enjoy the food here more. I recommend highly. I’ll be back on my next trip (which might be later this year) and then will also check out The Toddy Shop, another Kerala restaurant a few doors down in Hauz Khas Village.