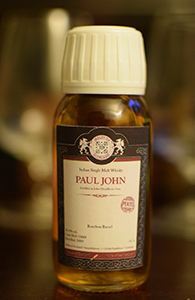 Here is the second Malts of Scotland Paul John cask. I was very pleasantly surprised by the unpeated cask I reviewed on Monday. That one was distilled in 2011 and I wondered if that marked an improvement in production processes at the distillery. Well, this one was distilled in 2009; if it too is better than its official peated sibling (see here) that hypothesis will be discounted. If you read that earlier review you’ll remember that while I liked it fine I thought the peat there merely covered up the flaws of the unpeated official Select Cask; in particular, masking the strong notes of raw wood present in the Select Cask. What will be the story here with (presumably) a couple more years of maturation? Keep in mind that a couple more years in India is not the same as a couple of years in Scotland or Japan in terms of evaporation etc. By the way, if anyone knows what the source of Paul John’s peated barley is, please let me know. I assume it comes from Scotland but some verification would be nice.

Nose: Big whack of peat right off the top, medicinal (Dettol) and briny; starts getting sweeter almost immediately with big notes of ham and cereals. Very Islay. Gets sweeter and richer as it sits and the oak begins to peep out a bit. More of the same with a few drops of water; a little more phenolic and maybe a tad more of the wood.

Palate: Sweeter to start and then all the stuff from the nose follows: rich, sweet peat, briny with cured meat and smoked fish. Lovely mouthfeel and very drinkable at full strength. With more time/air there’s some lime too. With a lot more time the citrus is more pronounced and, as on the nose, the oak makes an appearance—but it’s not as woody as either of the two OB releases I’ve previously reviewed. Okay, time to add some water. Definitely more wood on the palate with water and it throws the balance off a bit. Saltier too.

Comments: Man, I was not expecting this. This is excellent stuff! Blind, I would have easily believed it to be a cask strength Laphroaig, probably teenaged. If this is what Paul John is capable of, bring it on! I don’t like to recommend 6 yo whiskies that cost $100 but I’m going to for this one. Get a bottle if you can. And either hold the water or experiment with adding only a bit at a time.