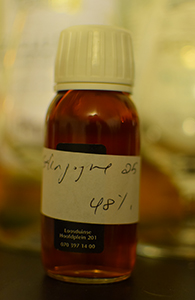 As I’ve said each time I’ve reviewed a Glengoyne (two occasions total before this one), I’ve not had much Glengoyne and have reviewed even less. I actually thought about purchasing this 25 yo for one of my local group’s premium tastings when it was first released in 2014—the price was “reasonable”, which is to say it was high but seemed reasonable compared to what’s asked these days for 25 yo official releases from most distilleries. In the end though I remembered that I hadn’t had very much Glengoyne and decided to exercise caution until I’d had a chance to taste it. That ended up taking a couple of years. In fact it wasn’t till this August that I finally got around to tasting it. This was at the same St. Paul gathering celebrating sherried whiskies at which I tasted the Glenfaclas 1968. As with that one, and some others from that night which will hopefully show up on the blog in the coming weeks, I brought a 2 oz sample of the Glengoyne 25 home for a more careful review, and here now is that review.

Nose: Big, dry sherry notes, quite leafy with a bit of rubber and a bigger hit of oak. As it sits the fruit becomes more forward (plum and cherry mostly with some dried tangerine peel); quite a bit of dried mushrooms too with time and the rubber turns into something closer to pencil lead. Water pushes the sharper notes and the oak back and pulls out more fruit but generally thins it out.

Palate: Very much as promised by the nose: dry with more of the umami and oak than the fruit. The oak is not tannic though and instead of the rubber hinted at on the nose there’s savoury gunpowder here. Nice mouthfeel: not too hot, not thin at all. As on the nose, gets sweeter as it goes with some tobacco and some leathery notes showing up as well and some apricot on the fruity end. More citrus with water and better balance.

Finish: Medium-long. Gets a bit sharper and much earthier.

Comments: Quite nice and more austere than I’d expected it would be, at least at first (and second). There’s not enough complexity here for me to take it up to the 90+ tier but if this particular style of drier sherry is your thing you might well disagree. A good decision to bottle it at 48%, I think. At a higher strength this could have been quite rough.

Thanks to Matt G. for the sample!