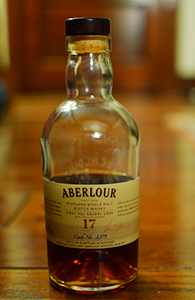 I have not reviewed very many Aberlours on the blog and I certainly have reviewed any in a while—the last one was Batch 45 of their ever popular A’bunadh series, which I wasn’t too excited about. Among whisky geeks the A’bunadh is really where the interest in Aberlour seems to lie. The market for big sherry bombs at high strengths is seemingly endless. Those, of course, have no age statements on them and most are likely quite young (<10 yo). I’ve liked a number of the ones I’ve had over the years but have often found others to be either too hot or too woody or both. Accordingly, I was very interested to see this 17 yo bottled especially for the Whisky Exchange, which seems to essentially be a grown-up A’bunadh. Still from first-fill sherry, at cask strength but at a reasonable abv, and all of 17 years old. This should hopefully give some sense of how this distillate does with heavy sherry over a longer period of time.

Incidentally, even though this is a single cask, and the cask number is specified, the Whisky Exchange don’t specify the year of distillation. Since this was bottled in early 2016, however, it’s probably from 1998.

Nose: Richly sherried with plum, apricot, dried orange peel; right below that soy sauce and saddlebags; some dry oak too. On the second sniff the wood gets sweeter and there’s some vanilla too. Water intensifies the plum and pushes back the wood.

Palate: More tannic grip here at first and second and it’s spicier too (cinnamon). Quite hot but that’s probably due as much to the wood as the abv (which is not crazy high). Where did the fruit from the nose go? It just gets woodier and woodier! With more time the wood begins to calm down and the fruit begins to emerge (especially the dried orange peel). With water there’s even more improvement: the plum emerges as well, the wood becomes less tannic and now there’s some dark chocolate as well.

Finish: Medium-long. The wood and spice hang out for a bit, leaving the faint taste of blood in my mouth. As on the palate with time and water.

Comments: At first it seems on the nose like this is what young sherry bombs want to grow up to be. But then on the palate it’s almost as hot and raw at first as some of the much younger A’bunadhs and quite a bit woodier. Time and water did wonders for the palate though. Despite the abv being not terribly high I’d say water is highly necessary.

One thought on “Aberlour 17 (for the Whisky Exchange)”