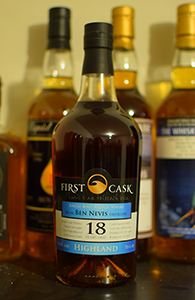 My first review in November was of a 19 yo Ben Nevis, bottled by Master of Malt in their That Boutiquey Whisky Company series. I did not care for it very much. It was a little too spirity and not generally very good evidence for my repeated claim that Ben Nevis may well become the next big thing among whisky geeks, as the prices of current top line distilleries, especially for sherry casks, continue to rise towards and past the roof. I noted of that one that it was frustrating because everything I like about Ben Nevis was obviously there in it but covered by chemical/artificial notes of one kind or the other. I am happy to say that this one does not suffer from any of those problems. It was bottled by Whisky Import Nederland and this is my second bottle. I went through the first at a pretty rapid rate—I also took it to one of my whisky group’s tastings a few months ago, and it was a hit with everyone there as well. It’s from a refill sherry cask but not a very shy one. Let’s get to it.

Nose: Rich fruit (plantains, apricot, orange peel) with leather and a touch of cocoa powder; some whiffs of sweet pipe tobacco as well. Gets stickier as it sits and the citrus expands and brightens. With a lot of time and a few drops of water the cocoa powder gets more milk chocolatey and it gets maltier on the whole.

Palate: Sweeter and more syrupy here and much fruitier. The fruit all but explodes as I swallow—all the stuff from the nose plus overripe peach, a bit of papaya and some pineapple. On the second sip there’s an earthier note that grounds the fruit. The oak is present, adding a bit of spicy bite but it’s in no way overbearing. Very nice, rich mouthfeel. Water pulls out more of the oak and makes the fruit more indistinct.

Finish: Medium-long. The fruit goes on for a while developing pepper around the edges towards the end. Just the faintest soapy note shows up on later sips. With water the soap disappears but it gets a little metallic.

Comments: I don’t usually comment on colour but this is rather dark for a refill sherry butt. It’s not a sherry bomb though—the fruit is the star here and it’s really quite lovely. Imagine a darker/richer version of the Binny’s Signatory Auchroisk 24 and you’re pretty much there. Just that bit of soap in the finish neat and the metallic thing with water keep it out of the next tier. And while I might have added a bit too much water, I preferred this neat.