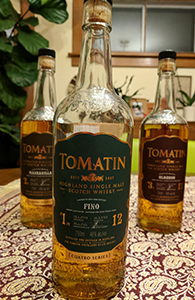 The Tomatin Cuatro series of whiskies was released just about three years ago. Accordingly, I am reviewing those whiskies now. Ol’ Jas’ mention of the series in the comments on my review of the regular Tomatin 12 got me thinking about them and I decided to buy the lot for my local group’s September tasting.

You probably know the details of the series: all of the whisky was distilled on the same day in 2002 and matured for nine years in ex-bourbon casks. At that point it was transferred to Fino, Manzanilla, Oloroso and PX casks respectively for another three years.  In theory, the series allows whisky geeks to see the differing effects of maturation in four different kinds of sherry casks. In practice, of course, it’s not clear how much of this can in fact be accomplished.

Still, even with these reservations, it’s an unusual experience. The only thing that compares is Springbank’s various sherry cask releases over the years—though those were never (I don’t think) whiskies distilled and bottled at the same time; and I suppose a case could be made for Glenmorangie’s original wine cask releases as well. Anyway, let’s see what this first one is like.

Nose: Porridgy and bready at first (quite yeasty) but there’s fruit below: apples at first and then some tart lemon and lemon zest. Gets muskier as it sits but the sour notes never go away. More of the musky fruit with water and more integrated on the whole.

Finish: Medium. Prickly as the fruit recedes and then the sherry separates a little. The sherry separation disappears with water—at first anyway: there it is again at the very end.

Comments: A very pleasant fruit-forward whisky that’s better with water. This is not sherry-influenced in the way that we normally think of sherry influence; until the slight sherry separation on the finish it tastes and noses like an ex-bourbon cask. It will be interesting to see if the others in the series—especially the oloroso and the PX—bear the sherry influence more explicitly. This, I have to say, sort of tastes like the regular 12 yo at 46%. For all that it has the higher abv, I can’t say I like it so much more.