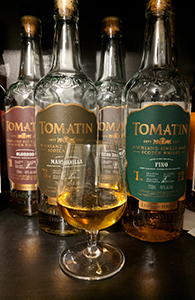 If you’ve been reading along for the last week you’ve probably noticed that I posted reviews of the four releases of Tomatin Cuatro (Fino, Manzanilla, Oloroso and PX). Of these I liked the PX release the best. Though I didn’t dislike any of the others, I didn’t find them to be particularly distinctive. I didn’t find the Fino and Manzanilla to be particularly sherried either, for that matter, in the way that we normally think of sherried whisky. It could be argued, however, that their dry, yeasty qualities might well be expressing the character of Fino and Manzanilla sherry quite well. The Oloroso and especially the PX casks were more in line with what whisky drinkers expect when they see the words “sherry matured/finished”. But because Tomatin does not clarify the kind of wood these casks were made of, it’s not clear if the greater stereotypical sherry influence of these two releases is down to the type of sherries these casks previously held or if it’s because these two releases had their second maturation in European oak while the other two were re-racked into American oak casks after the first nine years. Without this information it’s a little hard to come to any meaningful conclusions about the effect of aging in casks that had previously held different types of sherry.

It would also have been useful to have a fifth, baseline release of a fraction of that same distillate that had been matured for that same period entirely in ex-bourbon casks. It would have been more useful to geeks, of course—though it’s hard to imagine that the audience for this series could have extended far past the geek market. (And the fact that a lot of these bottles are still around might be evidence for that supposition.) Still, though not presenting as stark a juxtaposition as I’d hoped for, this was an interesting enough experience.

The series also allows the home “blender” to experiment with making their own 12 yo ex-sherry Tomatin whisky—and I am a very enthusiastic home blender. I’ve been playing with the remains of my Cuatro bottles a bit since my local group’s last tasting (which was focused on these four bottles) and I have to say I’ve enjoyed these experiments more than the experience of drinking the whiskies themselves. Here now are two of the blends I’ve made. The first is a true Cuatro blend: equal parts of all four. The second mixes one part each of the Fino and Manzanilla with two parts each of the Oloroso and PX. My notes are briefer than those for the component whiskies themselves—there’s a limit to even my solipsism.

Tomatin Cuatro, Blended (46%; from my own bottles)

Nose: The sour notes dominant in the Fino and Manzanilla turn more citrussy here and there’s some gooseberry as well. Less yeasty now than tart. A little bit of orange liqueur floating above the tart notes and a mild leafy quality below them.

Palate: Leads with the tart notes but they’re on a malty base. Sweeter as I swallow. The richer and spicier notes from the finish pop up earlier with each sip. Nice balance.

Finish: Long. The leafy note jumps out, followed by some oak and then a bit of milk chocolate. Gets spicier as it goes.

Nose: A little generic at first but then notes of apricot and orange begin to appear along with some chocolate and toffee. After a bit there’s a tobacco note.

Palate: Much richer here with orange peel and raisins and oak and spice (cinnamon). Gets earthier as it goes.

Finish: Long. Nothing new develops but the spice hangs out for a long time. After a few sips it gets leafier here.

Comments: Blend A is better than any of the component parts, except maybe the PX. It feels more balanced than the Fino, Manzanilla and Oloroso casks and also seems more Tomatin than all four of them. Not sure how that latter bit happens. Blend B is more muted on the nose but richer on the palate, with the darker sherry cut with just enough acid. Both go to show that in blending the whole is not the same as the sum of the parts. Well, I think I know how I’m going to drink what’s left of the four bottles.