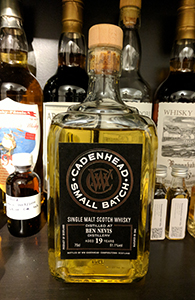 After a few very untimely reviews let’s do a couple this week that were bottled closer to the present—just last year, in fact (they’re not available any more either but you can’t have everything). First up, this Ben Nevis 19, 1996 bottled by the usually very reliable Cadenhead in their Small Batch series. I bought this at auction in the UK and the bottle did not come with the dangling paper thingy that contains all the cask details on these releases (is there a name for those things?). The label does say “Small Batch” but Whiskybase tells me there were only 222 bottles released. So, was it actually a single cask? Hard to see how you could blend two or more casks and arrive at so few bottles—unless only a part of the vatting was released here. Anyway, I bought it because ex-bourbon Ben Nevis can offer the tropical fruit that I so love in single malt whisky at a younger age than most distilleries, and because the last Cadenhead’s Small Batch ex-bourbon Ben Nevis from 1996 that I bought was just excellent (as was the last ex-sherry Ben Nevis from 1996 that I bought). I am happy to say that my hopes were not dashed on the shoals of reality.

Nose: Typical bourbon cask Ben Nevis with peppery, musky fruit (melon, pineapple, makrut lime) and a hard candy, citrussy sweetness. Beneath it is some biscuity malt. A drop of water makes it quite a bit sharper to start but also pulls out some cream.

Palate: Comes on with white pepper and lime and then the muskier fruit expands as I swallow (think a fruity New Zealand Sauvignon Blanc). Nice, oily mouthfeel. As on the nose, it gets maltier as it goes and with more time the prickliness is as minerally as it’s peppery; more pineapple too. Water doesn’t do anything interesting for it here and washes out most of the fruit.

Finish: Long. Pepper, lime, oak and a bit of milk chocolate at the very end. With more time the citrus is closer to orange than lime. More indistinct here too with water.

Comments: This is really very good, fruity bourbon cask whisky with a nice mix of pepper, malt and brighter tropical fruit. At 51.1% it seems to be at its perfect drinking strength: I’d hold the water. I’ve been drinking it down steadily since I opened it and it’s at its best once it’s gotten a bit of air in the bottle.