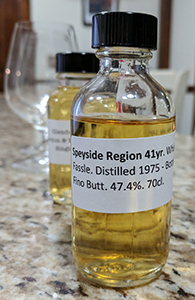 Okay, after Monday’s Ben Nevis 19, 1996 from Cadenhead, here’s another whisky released in 2016 by an indie bottler. The bottler in this case is the German outfit Whisky-Fässle. The whisky is much older, distilled in 1975 but it’s not said where it was distilled. I haven’t looked around to see if there’s any nudge-nudge, wink-wink out there about the identity. It is said to be a classic 1970s-style fruit bomb which might lead people who bought bottles to hope it’s a Longmorn or Caperdonich. But if it were either, I imagine the bottler would trumpet that. So either a distillery like Glenfarclas which suppresses indie use of its name or a less marketable name. Anyway, there were a number of these 1975 casks released last year, I believe—which suggests a parcel was unearthed somewhere and snapped up by various indies. It’s also curious to see the cask specified as Fino. Granted, I have far less experience of this stuff than many, but I don’t think I’ve seen that level of specificity marked on many casks put away in that period. I was tempted to buy a bottle when it was available, but the price—north of 300 Euros—took quick care of that. I’m glad though to have the opportunity to taste it via a bottle split. Let’s see what it’s like.

Nose: Juicy citrus and honey and beeswax with some mothballs, pine and old, polished wood. On the second wave there’s ripe banana and cherry liqueur, joined a bit later by some fresh orange peel. Fades a bit after 15-20 minutes—perhaps water will revive it? Yes, it brightens it back up but the fruit is mostly cherry; and there’s more oak here too now.

Palate: Not quite as expressive off the bat as the nose and there’s less of the citrus and more of the cherry here along with a floral sweetness (pressed flowers in an old book on a musty, oak shelf). On the second sip there’s a cough syrup’ish quality to it (but it’s not sickly sweet) and a bit more bite. The texture is a bit too thin. Gets oakier with time. Okay, let’s see what water does. It makes the oak less aggressive (more like rosewood now) and improves the texture; it’s also now less cough syrupy with more lemon peel peeping through.

Finish: Medium. Gets drier as it goes with the oak coming out here most strongly. As on the palate with water.

Comments: Well, this started out gangbusters on the nose but then faded a bit on the palate and finish. Water did good things on the palate but washed out the nose. It’s a very good, fruity 1970s Speysider but I think it was probably bottled 2-3 years past when would have been optimal (maybe that’s when the cask was unearthed?)—there’s just a bit too much oak extract and it throws the balance off on the palate and finish for me. Anyway, I’m glad I tried it but also glad I was not tempted to splurge on a full bottle at the price (based on this anyway).