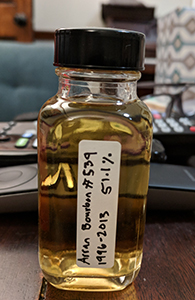 My bourbon cask tour of Scotland continues. So far the itinerary has included a couple of stops at Aberlour in the Speyside, at Bladnoch in the Lowlands and at Bowmore on Islay. We’re on another island today: Arran. I’ve not reviewed much Arran on the blog and, indeed, it’s been a while since I’ve had any. This is not a recent release: it’s a single cask from 2013 and I think it might be the oldest Arran I’ve had so far—not that there are very many very old Arrans (I think production only began a year prior in 1995). I think this was one of a few single casks released in the US in 2013—though my memory can rarely be trusted. I’ve not been following the distillery very much and I’m not sure what they’re up to these days or what their general reputation is like. I do know I’ve always enjoyed their 14 yo when I’ve had it (the 10 yo a little bit less). I have also reviewed another single bourbon cask released a few years before this one. If this is as good it’ll be pretty good. Let’s see.

Nose: Malt and cereals to start and then a bit of honey, lemon peel and some apple. The citrus gets muskier with a bit of air and some sweeter notes of pastry crust and vanilla emerge as well. Muskier still with water, with peach and ripe pineapple and something floral.

Palate: Lemon, white pepper and then a bit of malt. Muskier notes as I swallow. Not much change at first but with more time it seems to get more peppery. Water pulls the late developing oak from the finish out much quicker on the palate—much more bite now,

Finish: Medium-long. Nothing new here except a bit of oaky/spicy bite at the end. The finish lengthens with water and the citrus now makes the lasting impact.

Comments: This is very pleasant stuff. Nothing very intense or interesting but a good session whisky, especially in the summer.