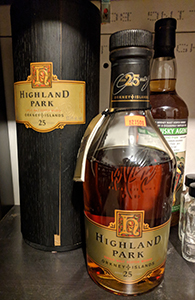 I’ve reviewed a number of very good whiskies this month but let’s close with something really special. This Highland Park 25 was released sometime in the mid-90s—most people say 1995 but I’m not sure if that’s confirmed (and no, I haven’t squinted at my bottle for an undecipherable code). I like to believe that it was released in 1995 because that would mean that there was distillate from 1970 in there and that’s the year I was born. (I know, this means a lot to you as well.) I opened the bottle on my 48th birthday this year—my new policy, now that I’m closer to death than birth, is to open a very special bottle on my birthday each year. This is Highland Park from well before they began to care about packaging (which started in the late 2000s and led to today’s series of embarrassments). High quality sherried whisky, not sold in a longboat or in a black bottle. It’s also from a time when you didn’t need to choose between paying your mortgage or purchasing Highland Park 25 for a special occasion. Anyway, as I’m in danger of veering into the territory of the negative—an area which, as you know, makes me very uncomfortable—I’m going to now turn to the review itself.

Nose: A lovely blend of honey, orange peel, apricot and brandied raisins; just the right amount of oak providing a frame. As it sits, the citrus takes a slightly brighter turn and there’s just a lick of smoke under it all. After a minute or so there’s some pencil lead. Water pushes the oak back and intensifies the honey and the apricot. A nice layer of malt too now.

Palate: As promised by the nose but with a bit more of the oak and pencil lead. Gets brighter as I swallow with little flashes of pineapple. The texture is just a bit too thin. With more time there’s some salt/brine. Water improves the texture, pushes back the oak and brings out some pepper.

Finish: Long. The brighter fruit coming up late on the palate pop and then the oak and the honey fade out slowly. Saltier here too with time. As on the palate with water.

Comments: Just lovely stuff. Heavily sherried whisky that is not an overwhelming sherry bomb in the modern style. This epitomizes everything I loved about Highland Park when I first got serious about whisky. That said, I don’t know that I’d say that it’s clearly superior to the two later official 25 yo releases that I’ve reviewed. Highland Park may be up to far more silly nonsense than they were when this whisky was released (or even a decade later) but they still take their 25 yo seriously (see here or here).