Rounding out my recent run of reviews of the mainstays of the Thai restaurant scene on University Avenue, here is my fourth review of Bangkok Thai Deli. (Here are my recent reviews of On’s Kitchen, Lao-Thai, Thai Cafe, and Thai Garden.) Like almost everyone else, we have Bangkok Thai Deli at the top of our Twin Cities Thai ranking, usually just a bit behind On’s Kitchen (which, as you probably know, began as a breakaway from Bangkok Thai Deli when they were still in their original space). I’ve always felt that at their respective bests, On’s is superior; on the other hand, Bangkok Thai Deli has been less variable for us, and given the very different ethnic demographic they draw, the food tends to come out hotter and less sweet as a default. Well, we thought the meal I’m reporting on here was superior to our last meal at On’s, even though there were a couple of dishes that disappointed (one of which was a dud).

We were there for lunch on a recent Sunday with a large group. There were 10 of us total. As Bangkok Thai Deli does not take reservations, and as they get pretty busy at lunch on Sundays (partly, perhaps, because On’s is not open), we decided to get there by 11.30. As it happened we arrived closer to 11.20 and a good thing too. While there were a number of four-tops open, the larger tables were all taken and if we hadn’t got our name in early we’d probably have had to wait for a while. By the time we sat down the room was filling up, and by the time we ordered it was jammed and stayed that way till we left.

As we were a large group, we managed to do a fair bit of damage. Here’s what we ate:

For pictures of the restaurant and food, please launch the slideshow below. Scroll down for price, thoughts on value and the (not-good) service etc. 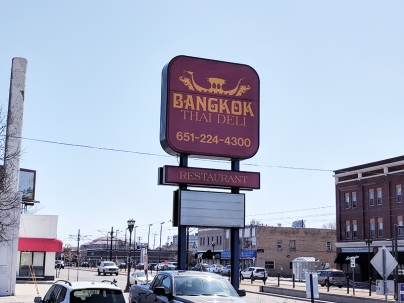 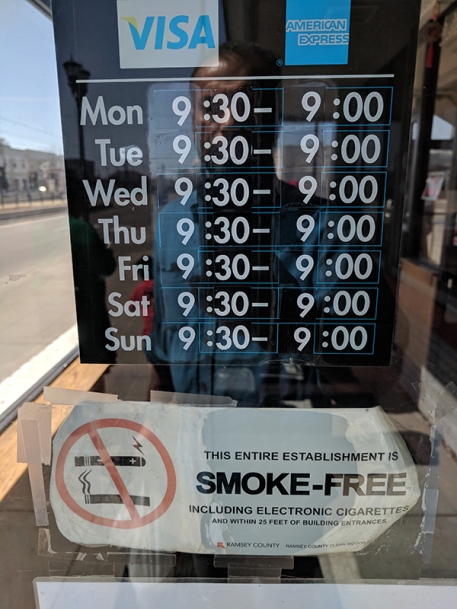 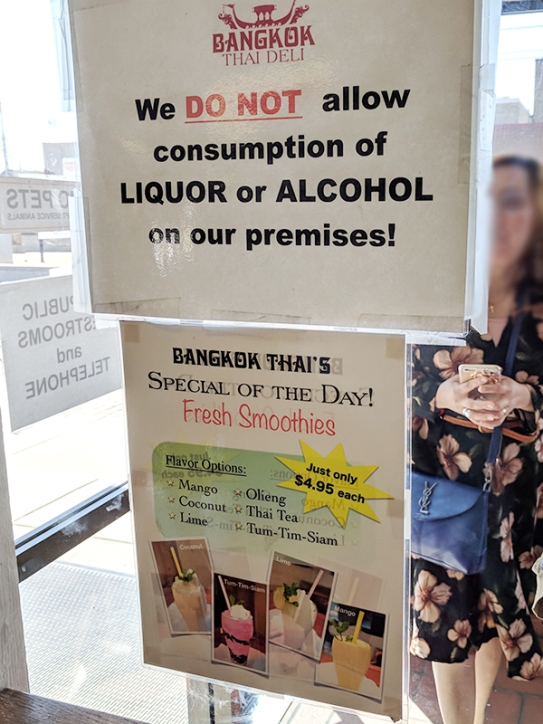 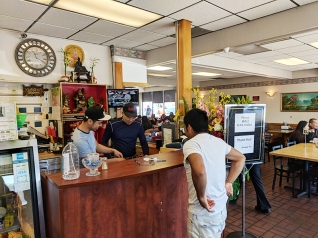 You pay here on your way out. 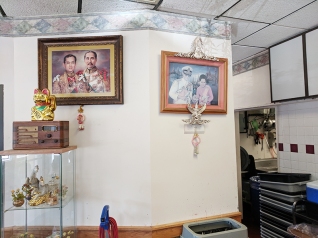 The usual obeisance to the royal family. 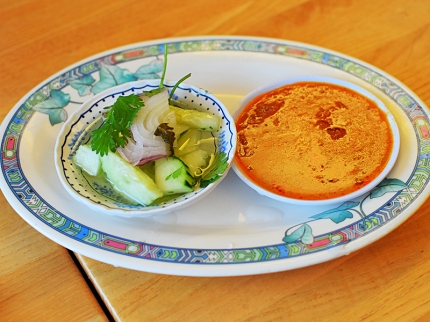 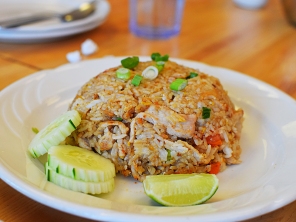 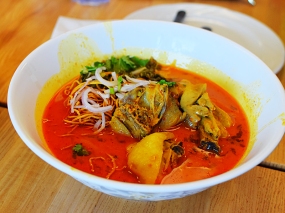 There’s a lot of chicken in it. 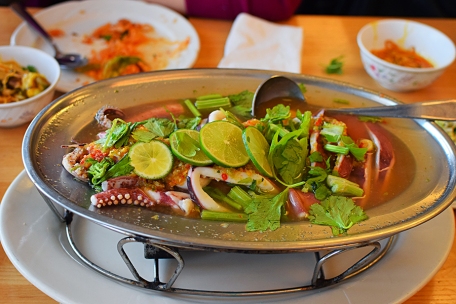 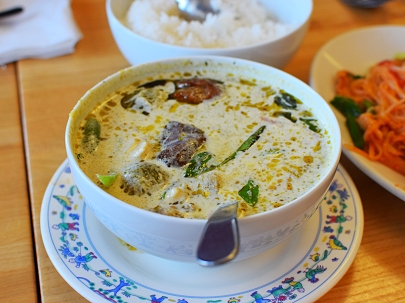 In addition to the food listed above, we had some drinks. They do not serve alcohol, so our drinks were of the carbonated, coconut and tea varieties. All of this came to about $25/head with tax and tip. A very good value and we took quite a lot of leftovers home.

The food, as I’ve noted, was largely very good—and with the exception of the tom zaab came out at proper heat levels. Only the tom zaab and the green curry were disappointments. Alas, the service was no better. Service has never been particularly good at Bangkok Thai Deli but when they’re really busy it can get really bad and so it was on this occasion. Everyone was very friendly but it took forever to get our order in, forever for the food to start coming out and we had to ask multiple times for rice and water. In fact, after a point, one member of the group got up and brought a pitcher of water over from the service area. Service doesn’t usually bother me at casual restaurants of this kind, but on this occasion it was really pretty bad. On the other hand, the food was pretty good compensation.

Up next from the Twin Cities food scene: probably a look at another immigrant grocery store. After that there’ll be more Vietnamese and Ethiopian food.