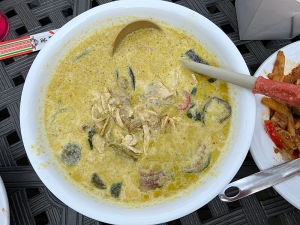 It has been a dangerously long time since our last Thai meal. That was takeout from Krungthep Thai in St. Paul. Having gone more than two months since then without Thai food, urgent action was required. Accordingly, on Sunday I drove to Bangkok Thai Deli on University Avenue and picked up a rather large order. It was a warm November weekend in southern Minnesota and so we had what was likely our last pandemic takeout meal on our deck with friends. There’s snow on the forecast for this weekend and it’s going to keep getting colder and we never did get around to buying any of those patio heaters. Well, as last hurrahs go, this was a good one. This was one of the best Thai meals we’ve had over the course of the pandemic. All of it would have been better coming straight from the restaurant’s kitchen to one of its tables, but it was pretty good even reheated after a long drive. END_OF_DOCUMENT_TOKEN_TO_BE_REPLACED 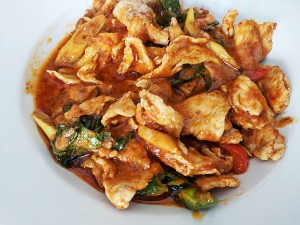 It has somehow been three whole months since our last Thai meal. That was from On’s Kitchen on University Ave. in St. Paul (the Twin Cities’ true Eat Street, as I never get tired of repeating) and was a very good meal. Here now is a report on a large meal brought home from their peers, Bangkok Thai Deli, a little further up (or down, depending on your perspective) University Ave: Bangkok Thai Deli. We’ve got food from them earlier in the pandemic as well—back in the summer when it was possible to eat outside with friends. Now it’s best not to be outside in Minnesota. The last week and a half has been unfeasibly cold (the minimum today/Sunday is forecast for -24f and the maximum only at -7f). Thankfully, at a maximum of around 0f things weren’t quite that bad on Saturday when I drove up to pick up this meal. Here are the details. END_OF_DOCUMENT_TOKEN_TO_BE_REPLACED 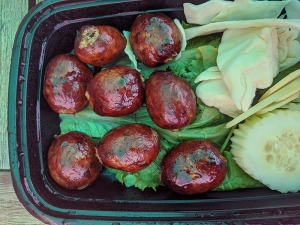 We began the pandemic getting takeout food only from places in our town or within a 20 minute or so drive. We then expanded our range to Bloomington and then to South Minneapolis. Now, more than three months in, we’ve finally made it up to St. Paul; and—with apologies to Joy’s Thai of Lakeville—we’ve finally eaten really good Thai food for the first time since this madness began. Yes, I drove up to University Avenue and picked up a box full of food for another socially distanced lunch on a deck with friends. A 50 minute drive to get there only to turn around and drive another 50 minutes back: but it was worth it. END_OF_DOCUMENT_TOKEN_TO_BE_REPLACED 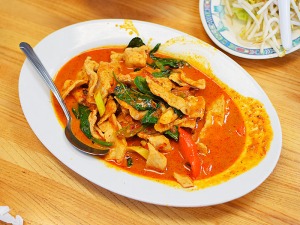 In January I posted a review of lunch at Krungthep Thai in St. Paul, the second incarnation of the Bangkok Thai Deli spin-off. I noted in that review that I thought that meal compared well with those we’d eaten at the mothership. In saying so I realized that we had somehow not been to Bangkok Thai Deli in almost two years. That error needed to be righted and this past weekend we got around to doing so. We descended on them on Saturday with a few friends we eat out with often. I can report that we had a very good meal. I can also confirm my impression that Krungthep Thai is on par with the original. Herewith the details. END_OF_DOCUMENT_TOKEN_TO_BE_REPLACED 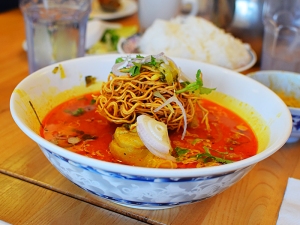 Rounding out my recent run of reviews of the mainstays of the Thai restaurant scene on University Avenue, here is my fourth review of Bangkok Thai Deli. (Here are my recent reviews of On’s Kitchen, Lao-Thai, Thai Cafe, and Thai Garden.) Like almost everyone else, we have Bangkok Thai Deli at the top of our Twin Cities Thai ranking, usually just a bit behind On’s Kitchen (which, as you probably know, began as a breakaway from Bangkok Thai Deli when they were still in their original space). I’ve always felt that at their respective bests, On’s is superior; on the other hand, Bangkok Thai Deli has been less variable for us, and given the very different ethnic demographic they draw, the food tends to come out hotter and less sweet as a default. Well, we thought the meal I’m reporting on here was superior to our last meal at On’s, even though there were a couple of dishes that disappointed (one of which was a dud).  END_OF_DOCUMENT_TOKEN_TO_BE_REPLACED

Following my mega Grand Szechuan round-up from last week, here is a report on a collection of meals eaten at Bangkok Thai Deli at various points in 2015 as well. In the past I’ve described Bangkok Thai Deli as being alongside On’s Kitchen at the top of the Twin Cities’ somewhat meager Thai scene. Based on our meals this year, I am sorry to say that I think it has dropped quite clearly to the second position. While we’ve eaten some very tasty things there, there’s been a lot of inconsistency and even some meals that were somewhat blah on the whole. We’ve still eaten there more than at On’s because we only get up to the Cities on the weekends and On’s is closed on Sundays, which puts it at a bit of a disadvantage vis a vis our wallets. As with my last Grand Szechuan post, what follows is a slideshow, with descriptions, of dishes that were (mostly) not reported on in my previous reviews (here and here).

END_OF_DOCUMENT_TOKEN_TO_BE_REPLACED 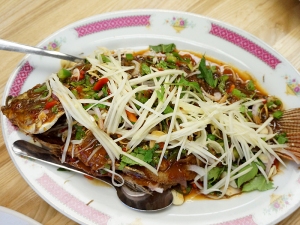 After our decent but not particularly special meal at Sen Yai Sen Lek we were left with a hankering for some better Thai food. So when we found ourselves heading to the Children’s Museum in Saint Paul a few Sundays ago we followed that visit with a return to Bangkok Thai Deli for lunch (see here for my writeup of a previous meal there). On’s Kitchen is closed on Sundays or else we would have gone there, but really there’s not so very much separating On’s and Bangkok Thai Deli these days. Well, there is the fact that Bangkok Thai Deli is usually crammed for Sunday lunch which means the likelihood of both a wait and fairly spotty service, both of which we encountered. END_OF_DOCUMENT_TOKEN_TO_BE_REPLACED

Last week I wrote up a meal at Krungthep Thai in Minneapolis, the recent off-shoot of Bangkok Thai Deli in St. Paul and noted at the end that it had inspired us to return to Bangkok Thai Deli for lunch. Here is the write-up of that meal.

We’d eaten at Bangkok Thai Deli for quite some time until On Khumchaya left to open her own place. We had a few less than great meals at Bangkok Thai Deli in the intervening period until we learned a) that there had been a change in the kitchen and b) of the existence of the excellent On’s Kitchen. We defected double-quick and hadn’t been back since. I’m not sure why our mediocre meal at Krungthep Thai made us want to check out the mothership once more but it did. And I’m glad it did. END_OF_DOCUMENT_TOKEN_TO_BE_REPLACED