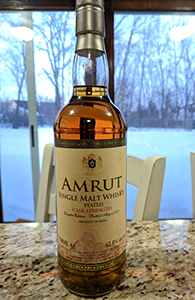 It’s been almost three years since my last review of an Amrut. The distillery’s strong reputation among single malt whisky drinkers endures, even if they’re not quite as exciting a prospect as they were a few years ago. Their lineup hasn’t changed very much either, and in the US we mostly see the Fusion and the regular and cask strength editions of their standard and peated releases. As far as I know, we have still not begun to get the single casks that go to the UK and EU and even to Canada. If true, I’m not sure why that is—is the market for Amrut in the US not strong enough to sustain that? I’d imagine that those paying >$100 for the Intermediate Sherry and Portonova releases would be fine shelling out for the occasional single cask as well.

Anyway, I’ve reviewed the Amrut Peated CS before—that was Batch 4, released in January 2010. This is Batch 9 and was released only a few months later. I assume by now they’re on to Batch 50 or so. I liked that previous bottle a lot and when I opened this one recently for one of my local group’s tastings, I liked it a lot too (as did the others: it was our top whisky on the night, beating out the Lagavulin 12 CS, 2016 release). Here now are my formal notes.

Nose: Mildly farmy, mildly phenolic peat plus some roasted malt and cream and mild chocolate. The farmy peat expands as it sits and there’s a bit of lemon too, and then quite a bit of brine: indeed, gets quite coastal as it goes with some kelp and seashells joining the party. Water softens up the peat a bit and the lemon gets preserved; some ham too now.

Palate: Hits with the peat and smoke with the salt right behind. Inky as I swallow. Rather drinkable at full strength but I can feel it go down. Smokier and peatier still on the second sip: the smoke is dry and ashy, the peat is farmy. Less salty and ashy with water; the smoke is now meatier and a bit sweeter.

Finish: Long. Nothing new but the peat and smoke and salt take a long time to fade. As on the palate with water.

Comments: Starts out in Ledaig terrritory, veers off towards Caol Ila and then settles somewhere between them. If this were a Scottish whisky I’d guess there were at least some sherry casks in the mix; I’ve no idea though if that’s the case here or if it’s aging in a hot climate that has that effect. Anyway, very similar to Batch 4—unsurprising given the proximity of release—and very good. Which probably has no bearing on what the current releases are like. Better with water, I thought.