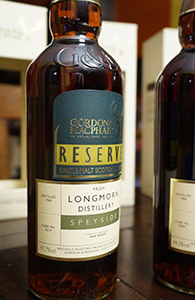 I am back in Minnesota. Our two weeks in Scotland were great, as were the 10 days that followed in London. I’ll have a number of reports on distilleries (and food) soon. But first, let me wind up my month of reviews of malts from Speyside and Highland distilleries. I’m sorry to say that few of the Speyside whiskies I reviewed in this series this month turned out to be appropriate for my commemorative purpose. Other than a Dailuaine and a Longmorn, it’s been a steady stream of mediocrity. Accordingly, I am going to end the series with a heavy hitter, the oldest single malt I’ve yet reviewed: a 46 yo Longmorn distilled in 1964 and bottled in 2011 as part of Gordon & MacPhail’s now legendary quintet of very old sherry cask Longmorns for van Wees in the Netherlands. The 1969 in this series is the best whisky I’ve ever had and the 1972 and 1968 were no slouches either. Only the 1966 showed some signs of extreme age. Will this one—two years older still—be even more over-oaked? Let’s see.

Nose: Rich, dark fruit (fig jam, plum sauce, dried tangerine peel, apricot, marmalade) and leather with salt and just a touch of savoury sulphur (more like rock salt). No sign of oak, which would suggest good news for the palate. With time there’s some heavily reduced balsamic vinegar, and earthier notes (dried mushrooms) beef stock and hoisin sauce. Very close to the 1966 but with more depth. With a drop of water there’s more of the soy and balsamic and less of the fruit.

Palate: Amazing: not over-oaked here either! Indeed, there’s no oak palpable at all at first sip. Nor does it taste like it’s closer to 50 years old than to 40: vibrant fruit is the order of the day here, and it’s brighter than on the nose (all the same stuff but in less concentrated form). The texture is a bit thin but that’s as close as I come to a complaint. With time the fruit has more tropical accents: pineapple, lychee, guava; saltier too now. Water pushes the fruit back a bit here too.

Finish: Long. It’s here that the oak finally pops out but first the fruit and salt and leather take a while to fade. Peppery at the end. The fruit expands here too as it sits and there’s some mango as well now. Water pulls out some bitter chocolate here at the very end.

Comments: Well, this certainly is not even more oaky than the 1966; indeed, I think I’d say there’s less oak here than in the 1968. I’m not sure how a whisky stays in a first-fill cask for 46 years without turning into a tannin bomb. Of course, unlike some, I’ve not had very many whiskies of this general age so my surprise is of the uneducated variety. The slightly thin texture is all that holds this back a bit. A few more ticks of abv and it would probably have had enough depth to take on the 1972. I liked the nose and palate better neat, and the finish a bit better with a touch of water.