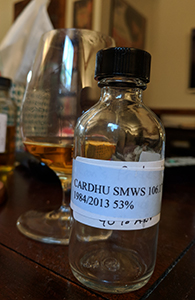 Like most people, I have not had very many whiskies from Cardhu. This is because there are very few whiskies from Cardhu for people to try. Even the redoubtable Serge—who just posted his 14,000th whisky review—has reviewed “only” 34 Cardhus. And Whiskybase lists less than 100 different Cardhus—and most of those are different incarnations of the 12 yo (which I have reviewed and liked—almost five years ago). At any rate, if there exist people who can confidently tell you what the characteristics of Cardhu are at different ages, from different decades, and from different cask types, I am not one of them. I’m sure those people exist, by the way—and as per the comments on my review of the 12 yo, they’re probably in Spain, where Cardhu is apparently a very popular malt. As the only other Cardhu I’ve ever had is the 12 yo this is both the second and the oldest Cardhu I’ve ever had. It was bottled by the SMWS in 2012 and they called it “Lovely sweet toffee surprise”. That sounds rather promising; let’s see if it’s what I get.

Nose: Yes, toffee. Also, baked apple, vanilla, cream, toasted oak: basically a “greatest hits” package of refill ex-bourbon cask notes. Gets spicier as it sits. With more time, the richer fruit from the palate appears here: apricot, lemon peel; but the oak is just a bit too insistent. Creamier and less oaky with a drop of water, but also less fruity.

Palate: Pretty much as promised by the nose, with the oak in the lead; a nice fruity flourish as I swallow (apricot, citrus, something more tropical). Nice texture. Spicier on the second sip but the oak is not tannic. With more time it’s fruiter still and the citrus gets brighter. A slight metallic note develops with water.

Finish: Medium-long. The late-developing fruit is the main story here: apricot, a bit of a ripe pineapple. Water is best for the finish as the fruit perks up here and picks up a bit of the oak spice.

Comments: This is really very good but in my opinion it was bottled a couple of years past what would probably have been optimal. That is to say, a little less oak impact and the fruit might have been more pronounced. Still very good though and very much in line with the profile of the OB Cardhu 12. It also reminded me of this Glenburgie of similar age that I really liked.

Thanks to Teemu S. for the sample! (Though he’s probably long forgotten that we did this swap.)