We have a long history of making poor decisions when it comes to bad weather and driving long distances for food; and so the morning snow on Saturday did not keep us from sticking to our plan to drive to St. Paul for lunch at iPho followed by a trip to the Science Museum. There wasn’t much snow falling from the sky and the friends we were planning to caravan with said roads were clear in town and we figured the highway would be fine too. It didn’t take too long to discover, however, that the highway was not fine. Slick conditions meant a bunch of cars spun out and in the ditch and a mile or so from the exit for Lakeville traffic was slowed to a crawl. We called our friends in their car and we all decided it was a good idea to not drive to St. Paul even if traffic opened up by the time we got to the exit. Well, it didn’t and so we got off and decided to go to Pho Everest in Lakeville instead.

I have reviewed Pho Everest before. That was back in late 2015, a few months after they’d opened. We’d stopped in a few more times since but hadn’t been back in a couple of years. The first thing we noticed when we entered is that they’d remodeled a bit and changed the format of the restaurant. It used to be that there were steam tables up by the cashier, where you’d order and pay before sitting down. The steam tables are gone and now it’s entirely a sit-down, table service restaurant. The owner said this had happened a few months ago. They also now have bright attractive menus with more items available now—if I remember correctly—than used to be the case.

We were five adults and our two brats. The adults all wanted bowls of noodle soup. The other four got various iterations of pho; I got their bun bo hue (which I had not tried previously). In addition we got some appetizers and a plate of broken rice and grilled pork for the boys to share. And to be safe we also decided to split a bunch of their banh mi. Of the appetizers the spring rolls and egg rolls were pretty good (though the dipping sauce that came with them was more sweet than funky—not enough fish sauce) and the hot chicken wings were fine. Their heat scale for chicken wings is 1-10, but we were told that’s their “Minnesota scale” and that the “Asian scale” goes up to 20. We decided to get it at 10 to see what the Minnesota 10 was like: well, it had a nice kick but it was nothing painful.

In my previous review I’d noted that their pho was nothing special and that doesn’t seem to have changed. It was fine but didn’t have much depth of flavour. The same was true of my bun bo hue which seemed like it might have been the pho broth with things added to it. There was not much evidence of lemongrass and nor did it seem like pork hock had been involved in the making of the broth. It was a tasty bowl of soup but not exactly what I was looking for. I much prefer the version at Simplee Pho, not too far up Cedar Avenue in Apple Valley (and I much prefer the pho at Pho Valley). The banh mi were tasty if a little thin on the paté (something I’d noted in my previous review as well). The grilled pork in the broken rice plate, however, was very tasty.

For pictures of the food and the space launch the slideshow below. Scroll down for notes on service and value. 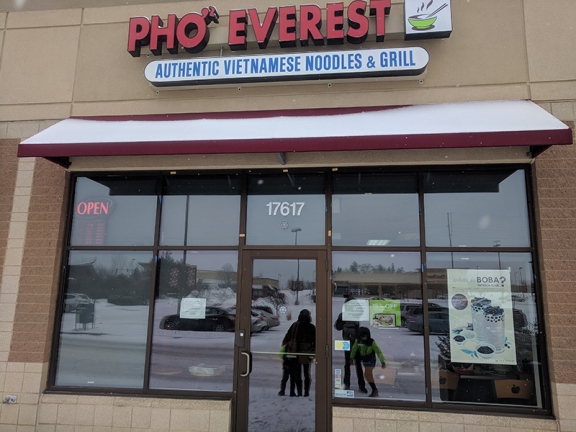 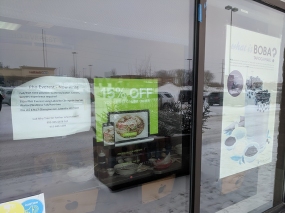 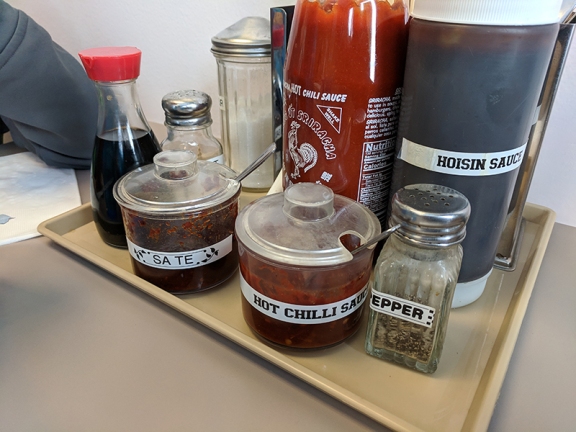 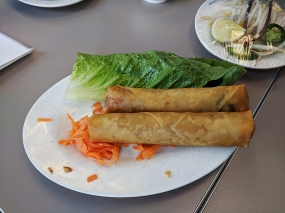 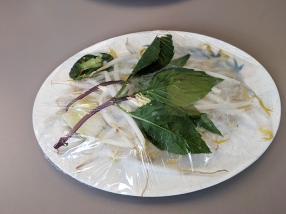 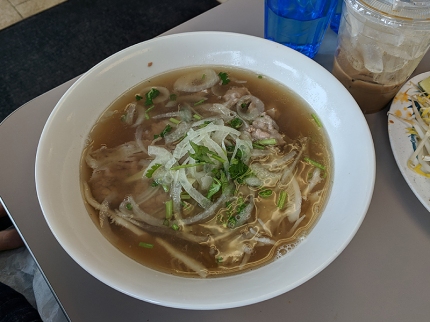 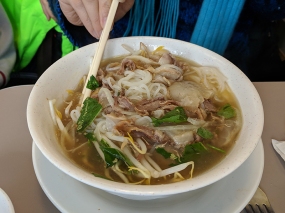 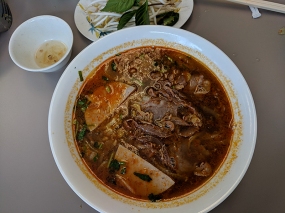 Service was very friendly but a bit patchy. The restaurant wasn’t full but there was a steady stream of diners and people ordering takeout. Perhaps because of the weather the owner was handling all the tables (a sign on the door notes they’re hiring). There was no sign of the boys’ food for a long time and we had trouble flagging him down. When we did he acknowledged that he’d forgotten to put the order into the kitchen. In a nice gesture he brought us a plate of spring rolls to apologize. The bill for the rest—including an iced coffee and a soda—came to $95 before tip or roughly $16/head (counting our boys as one adult).

Even though the food remains at a “solid but nothing special” level I am glad to see that they’re obviously doing well. There’s a lot of new residential construction that’s come up in Lakeville in the last couple of years and this obviously bodes well for food options in the area. Our own town—about 20 minutes south—still does not have any Vietnamese food (or Thai for that matter). And so it’s good to have a decent option a quick drive away, even if it’s nothing so very special. And on a bad snow day like today—with no lunch waiting for us at home if we’d turned around completely—it was particularly welcome.

Okay, I’m going to finish up my Hong Kong reports next week and then get back to my remaining Bombay and London reports. It will probably be the end of March before I get done with all my trip reports (Delhi and Los Angeles are yet to come), and I’ll probably squeeze in some more Twin Cities reports as well between those. Maybe we’ll even get to iPho in a couple of weeks.