This was actually the last proper meal I ate in Bombay on this trip but I am writing it up out of order now as I am a little pressed for time and it involves resizing fewer pictures than all my remaining Bombay meals.

If you’re unfamiliar with the Bombay food scene—as I imagine most of my readers are—the name of this restaurant is probably a big mystery to you. It is actually very simple: the restaurant serves Gomantak food—a subset of Goan/Konkani food—and this is a branch of the original Gomantak restaurant that is located by a highway in Bandra. Thus Highway Gomantak: mystery solved. As with many restaurants in this genre in Bombay, it is an unassuming restaurant that serves Goan food of a kind completely unknown in North India, leave alone in the US. This is not the Goa of vindaloos and sorpotels but of fish curries and rava (semolina)-crusted fried fish and shellfish. All these restaurants serve an array of seafood dishes that are basically iterations of a few preparations with a range of fish and shellfish. Add some thalis and some side dishes and that’s your menu. As with many restaurants in the genre, the price is on the low side and the quality is on the high side.

I was eating on this occasion in the company of one of India’s very best food writers, Vikram Doctor. I’ve known Vikram for a while now though we’d been out of touch for the better part of a decade. We met on the eGullet India forum in the early 2000s and then were both active members of Another Subcontinent’s food forum through most of the rest of the decade.. I first met him in person in 2005, on my first visit to Bombay since I was a kid (in the late Jurassic). That was a memorable evening. I was in Bombay during the monsoon and it was raining cats and dogs as he took me and the friends I was staying with to dinner at the legendary restaurant Anantashram in Khotachiwadi. This time it was in the winter and, alas, Anantashram has now shut down—though I think I heard that the owners opened a branch in Goa—but I was happy to go anywhere Vikram picked. And after the meal I was very happy indeed he’d picked Highway Gomantak.

Their menu is simple: you can choose from a range of non-veg thalis in which the main seafood or meat entry will vary or you can choose a veg thali. I was hellbent on eating a tisrya or clam thali but Vikram steered me to the veg thali, saying that Gomantak’s veg dishes were very good and that as a first-time diner it was a better idea to get that and add some fish dishes on the side. I was very happy to be guided by him. He got a fish thali—I want to say with bangda/mackerel. We also got an order of the kolambi/prawn fry and a fish fry (I want to say surmai/king mackerel)—both were coated with spices, lightly battered with rawa/semolina and fried to a crisp. Both were also excellent. My veg thali was also very good. I was too busy chatting to ask for details but there was excellent solkadi (the kokum-flavoured, spiced cold coconut drink), a sambhar-like lentil dish with drumsticks, a veg curry, a preparation of gourd of some kind, and a preparation of chopped greens; plus rice, a roti and a papad. All were very good indeed, though at this point I was so stuffed from four days of over-eating that I could not finish everything.

By the way, while I can translate the names of some/most of the shell/fish on the menu, I don’t know what they all are. If you know what “mudadhushi” and “saindalee” are in English, please write in below. Ditto if you can confirm that “chanak” is snapper and “gaboli” is fish roe (but what fish?).

For pictures of the restaurant and the food, launch the slideshow below. Scroll down to see how much all of this cost etc. 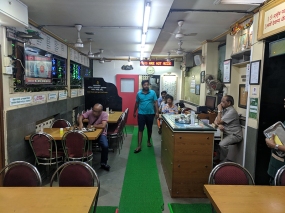 There is another dining room past the cashier. 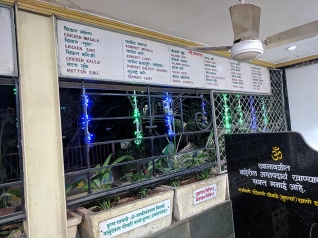 I can translate the names of some but not all the shell/fish if you’re wondering. 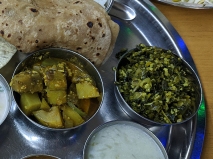 All of this came to Rs. 1500 for the two of us or just about $22. If you’ve eaten at restaurants like this in Bombay you know that service is besides the point. At places like Highway Gomantak ambience emerges from their lack of interest in ambience and service. Everyone at the restaurant is gruff, from the servers to the customers—even Vikram ordered our food with a demeanour that suggested he thought our server capable of trying to sell us last week’s fish. Unless you’re high-maintenance you’ll see your server once when you order, once when the food is brought and once when you ask for the bill. And don’t try to pay with a credit card unless you want to be mocked: cash only, please. Places like this may seem intimidating if you’re not a local or with a local but you can’t really get the flavour of Bombay’s food culture without eating at them. And you really can’t go to Bombay and not eat this food.

Well, as good as the food was, it was even better seeing Vikram again. We reminisced about Indian food forums in the days of yore and also chatted at length about the state of current Indian food writing, both in India and especially the United States. I was glad to see that we still agree about most things—I guess we’re both cranky old men now. I look forward to seeing him again in far less than a decade, and hopefully working with him on the program I was in Bombay to set up. I also highly recommend checking out Vikram’s podcast (though I think he said it was on hiatus) and read his pieces in the Economic Times.

Up next from Bombay will be another Gujarati meal report. But before that I will have another London report and possibly also the third installment of my series covering food writing on India in the US.