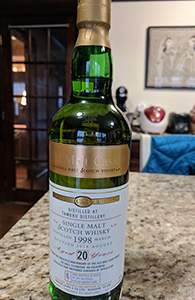 Back in January I posted reviews of a number of the releases that Hunter Laing put out last year to mark the 20th anniversary of the Old Malt Cask label. I liked a number of those a lot (especially the Arran 21; and surprisingly, not the Laphroaig 12) and this emboldened me to buy a few more of the releases from the series. A bunch of these are still available—perhaps because there’s no information on them at Whiskybase, and really no reviews at all on most of them. It’s also, of course, the case that the ones that are still available are malts distilled at non-name distilleries. Such is this Tamdhu 20. And so I find myself in the unusual position of being perhaps the first person to review a recently released whisky that is still available. I opened this bottle last month at a tasting that featured two more whiskies from this series that are still available (from the similarly unsexy distilleries, Inchgower and Teaninich) and it was quite well received. Here now are my formal notes.

Nose: Citrus peel (somewhere between orange and lemon) and prickly pepper. Sweeter notes (honey) below and also a malty core. As it sits there’s a gingery note along with the malt. With a few drops of water the citrus turns definitely to lemon and the malt is mixed in nicely with it

Palate: Exactly as promised by the nose: the citrus and pepper lead and sweeter notes come up from below turning malty as I swallow. Oily texture and more bite than I’d expect at 50%. On the second sip the sweetness is less honeyed and more fruity (a bit of peach, a touch of apricot) and the citrus turns to lime. Brighter and sweeter with water and there’s a little chalk too (works well with the fruit). Gets grainier with time.

Finish: Long. The malt expands on the finish and the fruit expands alongside it. Longer and sweeter with water and the oak pops out.

Comments: Very good whisky of its type; no fireworks and no great complexity but very well balanced and very good. From my first pour I’d thought there was a chance this was from a refill sherry hogshead but the pleasures now are all of the bourbon cask variety. I liked it better with water.