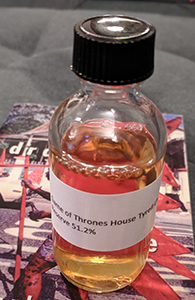 There’s just one episode of Game of Thrones to go and nobody has any hope of the show suddenly beginning to make sense again in the finale. Too much has been rushed for the last couple of seasons—and really rushed this season—and consistency of character and plot have been sacrificed to the need to just get to the end. The show gained its identity—via the books—from unexpected reversals of genre expectations but then got trapped in the cycle of having to constantly present the unexpected (arguably this is true of the books as well). We are all prisoners to plot, serving out our sentence and there’s only one more episode to go. At least the show is making it hard for us to miss it when it’s gone.

And speaking of things that don’t make sense, here is the House Tyrell whisky from Diageo’s Game of Thrones marketing tie-in (see here for the ones I’ve previously reviewed). I’m sure Diageo has their reasons for making the House Tyrell whisky a Clynelish but from where I’m sitting it makes about as much sense as the zombie Mountain suddenly developing agency. Clynelish is in the northern Highlands whereas House Tyrell’s seat at Highgarden is in the south of Westeros. Clynelish is by the sea, Highgarden is by a river. And so on. On the plus side, this is the only cask strength release in this series. The Queen of Thorns would have approved. Let’s see what it’s like.

Nose: Honey, lemon peel, a mild leafy note, some brine. On the second sniff there’s the beeswax we’re all required by law to find in Clynelish. The honey, citrus and wax meld nicely as it sits. A few drops of water and the citrus expands (all orange now) and there’s a cereal note too.

Palate: Pretty much as promised by the nose with that leafy note a little more pronounced. Very nice texture at full strength. On the second sip that leafy note moves in the direction of milky cocoa. With water a metallic note develops that I’m not crazy about.

Finish: Long. The citrus builds (more orange than lemon here) and there’s a peppery, zesty bite as well. Not much change here with water.

Comments: This is easily the pick of the set so far and a very good value at the price originally asked for it. Very glad I managed to find a bottle before tasting it (thanks to Rich for the recommendation and assist). I liked it better neat and that is how I will be drinking my bottle once I open it.