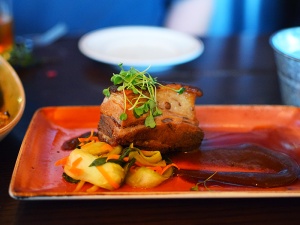 With that out of the way, let me tell you about said dinner. But first a bit about the restaurant which opened just about three years ago. They bill themselves as a contemporary Southern restaurant and are helmed by Justin Sutherland, a Top Chef alum who is also an alumnus of local kitchens, Meritage and the late, lamented Brasserie Zentral. Sutherland has since embarked on creating a local Southern mini-empire of his own and has a new place opening soon in Minneapolis. Handsome Hog remains, for now, at least, the center of his operations. It has received strong reviews locally and we were excited to finally go.

It is located in the Park Square Court building next to another restaurant, Public Kitchen and Bar (of which I know nothing). The two restaurants have contiguous outdoor seating alongside 6th street and also share their restrooms inside. The main entry seems to be from inside the building—that end is where the hostess station is and that is where we were directed when we came in through the outdoor seating area. The restaurant is very casual. There’s a long, narrow dining room with a few 4-top booths on one side and 2-tops along the windows on the other side; this curves around to the bar and the main entrance. There are a few more tables there opposite the bar that can take groups of four. We had a reservation for our group of four—we were eating with the friends we were recently at Revival with—and were offered a table there. Between the noise from the bar and the fact that the barstool-like seating there was not optimal for one of the group who has back pain issues, we asked if a booth was available and were moved to one. I should note that if you are in a group of more than four, your indoor options will be either to have a couple of the tables near the bar area pushed together or the one table for six out by the booths; there may be more flexibility outdoors.

Regardless of where you sit, the vibe is casual, far closer to chain restaurant informality than anything resembling fine dining. I mention this because the prices are on par with local fine dining options (our bill was higher than at several places we’ve eaten at recently that have a more formal aesthetic). But more on this below—first let’s get to the food.

We decided to share a few starters and sides and get an entree each (with a view towards sharing bites of those as well). Portions of everything turned out to be massive and we ordered far too much (unlike at some restaurants our server made no indication of this to us at the time of ordering). What did we get?

We got their medium board of house-smoked and cured meats ($22). It featured salami, speck and I want to say coppa (all good) and some excellent pork rillettes. The pickled peppers and veg and little smears of mustards and sauces were all very good indeed too.

Being extremely full, we shared a few bites each of their pecan pie which was rather good.

For pictures of the food and the restaurant, launch the slideshow below (the combo of yellow lighting and natural light once again wreaked havoc on my camera’s white balance). Scroll down for details on drinks, service and the knotty question of value. 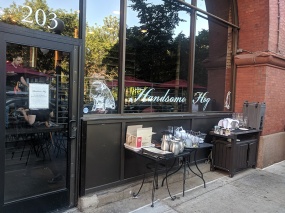 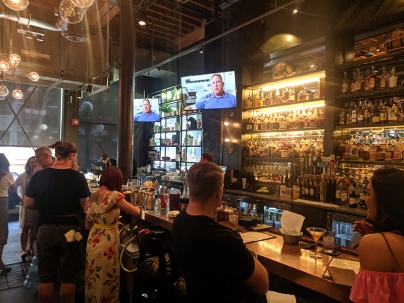 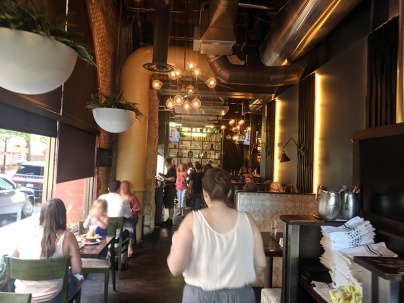 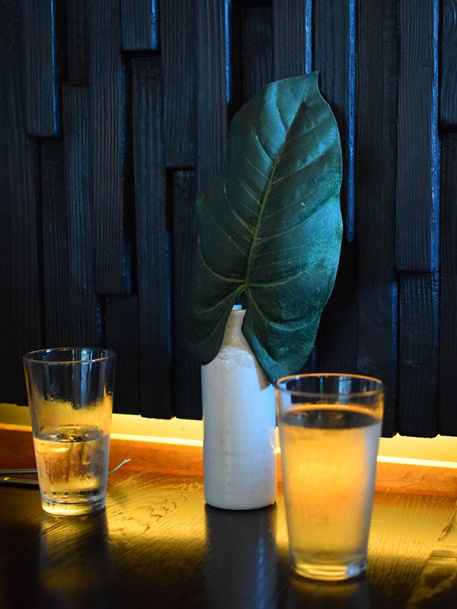 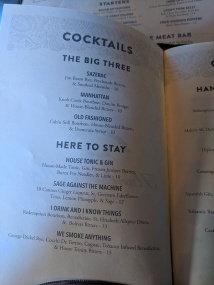 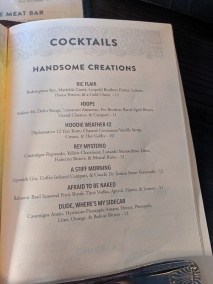 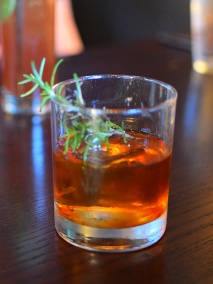 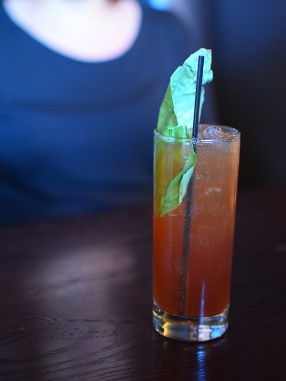 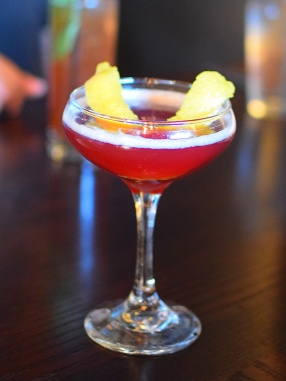 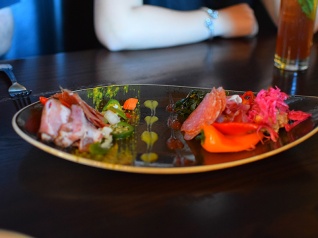 The greens were surprisingly spicy. 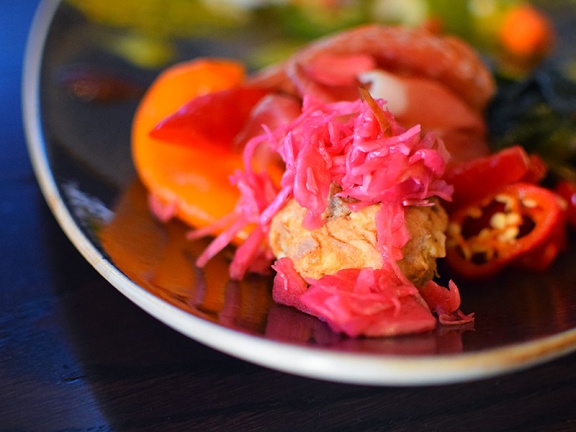 Very good with the pickled cabbage. 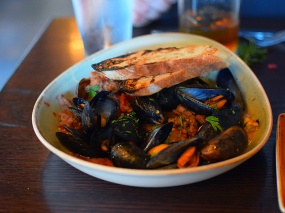 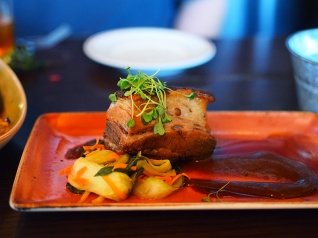 This was really needed to cut through the belly. 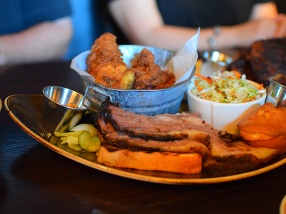 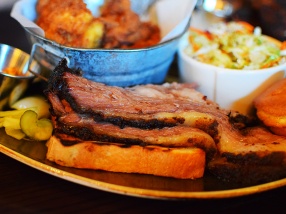 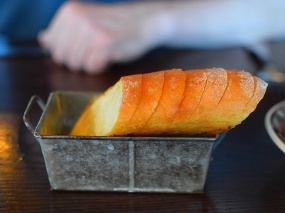 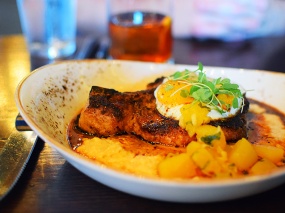 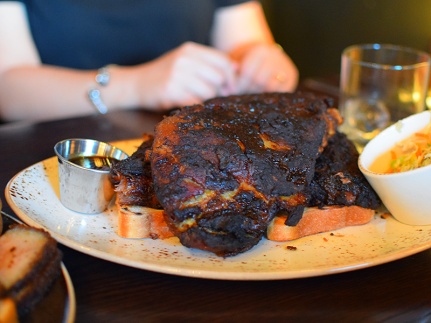 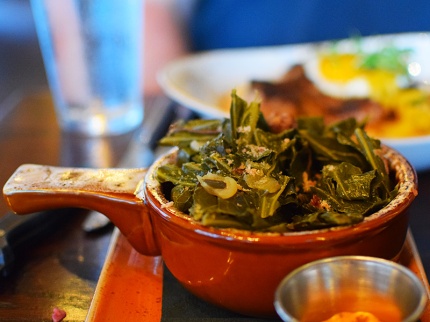 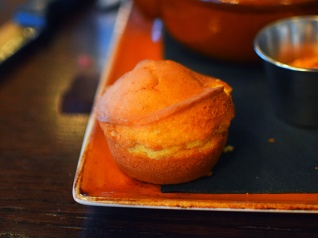 As is the style these days, they have a large cocktail menu with a few standards and a number of custom creations—some of which seem to be set (under the Here to Stay heading) whereas others (under the Handsome Creations heading) might possible rotate, I’m not sure. There’s also beer and a long list of bourbons. We started off with a cocktail each.

For the second round one of us got another cocktail (their Old Fashioned, good) and two of us got beers; the fourth rested.

Service was friendly and present. As noted above, our server could perhaps have indicated to us that we might have been ordering too much food for four people—that’s certainly not an unusual thing to do. A bigger deal, however, was something else she didn’t do. One of our friends has a corn sensitivity and she asked if the succotash (in the salmon dish she was ordering) had corn in it. “I don’t think so,” said the server, “but I’ll check before putting in the order”. As she didn’t come back to say otherwise, we assumed the succotash was corn-free; but when it showed up, there was the corn and a lot of it. She was able to move it off the plate and eat around it but this is a bad error to make.

All of the above food and drink plus tax and tip came to just short of $340. Or roughly $85/head. I hope the Lowertown nationalists* will forgive me but I think this is a lot to pay for what this was in terms of both food and experience. Now, we took leftovers home and it is safe to say that five adults could easily have eaten all the food we ordered. But assuming that fifth adult would have had a couple of drinks that would have taken our total to at least $360, which would still be $72/head. And I’d say that too is too much for this experience. Compare with the $44/head we spent at the equally informal Hai Hai (albeit with fewer drinks) and the $72/head we spent at In Bloom for far more ambitious and better-executed food in a much nicer setting (and better cocktails).

And given that we liked the versions of the dishes in common better at the more reasonably-priced Revival it’s hard to see us picking Handsome Hog over them for our next Southern meal. That said, we did find most of the food tasty and I’d be happy to come in for a quick bite and beer if I were going to a game or other event in the area: a cocktail or a beer while splitting a rack of ribs or a smoked meat board with friends is probably the way to go. I’d certainly come back here well before I’d go to Saint Dinette (though they are, of course, very different restaurants).

My next report from the Twin Cities will be off a lunch buffet at an Indian restaurant in Bloomington that had some surprisingly good elements. I’m in Montreal and Toronto next week so you can expect a bunch of Canadian restaurant reports in the wake of that trip. Twin Cities service should resume after my return.

*Some people on a Lowertown, St. Paul Facebook group got very upset with me for mentioning in my review of Saint Dinette that we were a bit late for our reservation on account of having had trouble finding parking. My review was also said to be verbose and pretentious. I’m sure they’ll love this one.