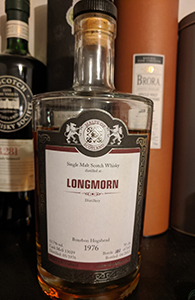 Earlier in the month I had a review of a dark sherry cask 17 yo Longmorn released in 2013. I liked it quite a lot but didn’t find anything very distinctive about it. Today’s Longmorn was also released in 2013 but is more than twice as old and is from a bourbon cask. As you may know, older Longmorns from the late ’60s and early ’70s have a very strong reputation for an intensely fruity character. It will be interesting to see if this is manifested in this malt distilled in 1976. Certainly, some of those who have left notes for it on Whiskybase mention tropical fruit. However, the other 1976 Longmorn I’ve had, a 34 yo also bottled by Malts of Scotland, was no fruit bomb—and nor, for that matter, was the 31 yo from 1978 bottled by the Whisky Exchange. And so my expectations for fruit are in check—it may be the case that production process changes had happened by the mid-70s that reduced that aspect of the malt’s character. That said, if this is as good as that Whisky Exchange bottle, a happy mix of fruit, oak and malt, I’ll be very pleased. Let’s see.

Nose: Tinned fruit but more of the tin than the fruit, which is a bit thin to start (pineapple, a bit of peach). As it sits some richness develops—darker malty notes along with some apricot jam and a hint of something more tropical (passionfruit? papaya?). With more time the oak begins to pop out here as well (a little prickly) and there’s some cereal to go with the malt. A few drops of water bring out more of the pineapple and some breadier notes.

Palate: Comes in thin and more than a little metallic here too. The fruit expands as I swallow. On the second sip the malt from the nose shows up here as well and there’s some polished oak to go with it. Muskier fruit teases under the surface but never quite breaks through. With time there’s more citrus—lemon peel—and some wax and white pepper. Okay, let’s add some water. Water pushes the oak back, cranks the citrus up (sweeter now) and makes the texture richer.

Finish: Medium. The fruit continues into the finish becoming more acidic as it goes. With time there’s more of the oak here as well: spicy, slightly peppery, a little metholated. With time some tropical notes emerge towards the end but only hesitantly and never fully. Longer with water and the fruit gets richer faster; simple syrup sweetness at the end.

Comments: Well, this is no tropical fruit-bomb. Which is not to say that it’s not a fruity whisky or that it’s not a good whisky; in fact, it’s a very good whisky and probably bottled just in time: I could see the oak becoming more pronounced/unbalanced with another year or two in the cask. Just don’t expect the rich, tropical fruit explosion that many Longmorns of the mid-70s an earlier are renowned for and you’ll be able to appreciate it for its own charms. I liked it neat and with a bit of water. And it is indeed akin to that Whisky Exchange release.