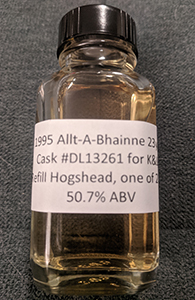 Let’s keep the reviews of recent 23 yo K&L exclusives distilled in 1995 going. So far I’ve reviewed their Clynelish and their Glen Moray. I gave them the same score (87 points) but not the same “buy” rating (“yes” on the Glen Moray, “no” on the Clynelish). Today I have another ex-bourbon cask from an unassuming distillery. Will I finally have a different score? Let’s see.

Nose: Very nice bourbon cask nose. Lemon mixed with malt and mild grassy notes; cooked tart apple and pastry crust behind. As it sits the apple expands and it smells more than a bit like a kitchen in which an apple pie was baked the evening before. Water emphasizes the malt and knocks back the fruit. Well, it knocks back the apple/pie: there’s more lemon now.

Palate: As promised by the nose for the most part but with less of the apple and more of the lemon and malt and grass. Nice weight at 50.7%. More acidic with time but otherwise consistent. Water pushes the acid back and brings out some tingling oak. The malt is muskier now.

Finish: Medium-long. The malty note gets a bit yeasty as it goes. Less sharp and more oaky here too with water.

Comments: Not a million miles from Wednesday’s Glen Moray. That one was maltier, this one fruitier from the get-go. Like the Glen Moray, this is just good malt whisky. I’d take this over last week’s Clynelish any day too if you’re looking for a 23 yo K&L exclusive that’s worth the money. But, again, there are no fireworks here. Fireworks are overrated.