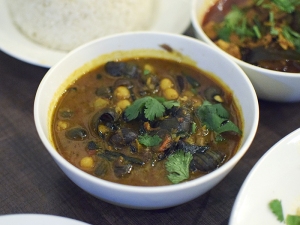 We’re coming to the end of our stay in Delhi on this trip (we’ve been here for almost two weeks). Coming “home” to Delhi has become progressively alienating in the 26+ years since I left for graduate school in the US. For the first  few years it was like falling back easily into a mother tongue you don’t speak in your day-to-day life. After that as the Indian economy liberalized and the mediascape and urban landscape began to transform radically, trips “home” began to feel increasingly foreign: familiar roads and places became harder to map, my old points of reference were no longer reliable. And, of course, as my life in the US—work, marriage, children—became more established the question of which was “home” became more blurred. This is, of course, a familiar immigrant story. Though there is a great deal of class privilege encoded in the fact that I have been able to be a regular visitor to India (for weeks at a time) ever since I left, I don’t want to claim that there’s anything exceptional about this sort of thing. But for me this trip has been different.

I became a US citizen in October and because India does not allow true dual citizenship I was forced to formally renounce my Indian passport/citizenship (there is such a thing as OCI—Overseas Citizen of India—status but I have not applied for it yet). As someone who is suspicious of the claims of nationalism I was surprised at how wrenching an experience this was. It became even more wrenching as the issue of citizenship exploded in India in November and December (this piece from December 12 is still a good primer). I do not in any way want to imply any kind of equivalence between my privilege in being able to voluntarily give up Indian citizenship for an even more powerful passport and the situation of those that the Indian state is targeting through the Citizenship Amendment Bill (now the law of the land) and the upcoming National Register of Citizenship. Muslims, Christians and Dalits, in particular, are in very likely danger of being reduced to second-class citizens or worse. But the second wrench has been in discovering/fully realizing that in giving up my citizenship I have also seemingly given up my ability to participate in political protest in India.

The BJP government has deported foreigners on tourist visas who were identified as participating in protests and friends in high places cautioned me against joining in any public demonstrations where I might be identified. The thought that I might not be able to return to the country—where my aging parents and almost all my extended family and old friends live, and which I want my American children to develop a greater knowledge of—has made a coward out of me. If I do successfully manage to apply for OCI status this may change—technically at least, I believe, OCI status grants one the same rights of expression as regular citizens.

In the meantime, however, I cannot bring you first-hand reports of the protests in Delhi. I can tell you that they are happening. That the remarkable Shaheen Bagh protests, led by Muslim women, is ongoing and an inspiration. That other legal protests have broken out elsewhere in the city and been put down by the police. That protests elsewhere in the country are ongoing as well and showing no signs of dying down. In fact, the Shaheen Bagh template seems to be spreading to other cities. In other words, even in these dark times there are signs of hope. Whether these protests will be able to stem this particular tide is unclear but the protests have reminded many Indians of the value of fighting for the citizenship they have taken for granted. For those of us outside the country—whether of Indian origin or not—the task remains to keep our attention on what is happening in India and help draw other people’s attention to it as well. If you too are interested—and you should be—I post regular links to news and articles on Twitter.

When I get back to the US I may begin to post regular round-ups of news and links on all of this on the blog. To a much lesser—and less important—extent I hope my food reports may also help illustrate the rich cultural diversity of India, a diversity the forces of Hindu fundamentalism—of which the BJP is the political vanguard—seek to squeeze and deny. First up, accordingly, from this trip is an account of a dinner featuring the cuisine of the North Eastern state of Manipur, whose cuisine—in terms of ingredients and flavours—implicitly resists the hegemonic identification of Indian food—and by extension, Indian culture—with upper caste Hindu foodways.

I have written before about the shifts in the presence and visibility of people from the North Eastern states in Delhi. See my report on an excellent dinner in 2016 at Dzükou—a Naga restaurant, then in Hauz Khas, now apparently re-opened in Vasant Kunj. Seemingly, the major hub of North Eastern life in the city is now the incorporated village of Humayunpur—right next to Safdarjung Enclave, where I worked in the early 1990s. You can read about the dynamics of this demographic shift here. The neighbourhood—comprised of small winding lanes filled with houses that seem to have had floors added on to accommodate new tenants—is filled with restaurants that serve the food of the North Eastern states—there is also at least one Korean restaurant as well as other regional restaurants.

Which is not to say that the restaurants are easy to find (Google Maps dies in a morass of “unknown roads” as soon as you enter the market). This was true of both Humayunpur restaurants we ate at in the space of a few days. Today’s report, however, is only of our dinner at a restaurant with the somewhat unusual name of The Categorical Eat Pham. “Eat Pham” apparently refers to any place to eat in Manipuri; I am not sure what the significance of “The Categorical” is: when I called the restaurant to inquire about reservations (they don’t take them) they answered the phone simply as “Eat Pham”. The easiest way to find it is to look for the more prominent Backwater Bistro in the frontline of the market and then follow the very narrow lane right next to it till you see the sign for Eat Pham.

Once you’re in you’ll see you’re in a cosy, attractive space—apparently it was even cosier until recently. If you arrive at 8 pm, as we did, you won’t have trouble finding a seat as Indians generally eat very late (by American standards). You’ll probably also see a buffet set out in the center of the restaurant but I’d suggest giving it a miss. The solo diner is better off choosing one of their many thalis. And if you’re in a group of five—as we were—it’s not difficult to put together a meal from their compact menu. We were guided by our friendly server and chose two starters, three curries and three sides. With one exception these were all very different from the complex of flavours usually identified as Indian outside India (or for that matter in most other parts of India). Many dishes incorporated fermented fish and bamboo shoots; the main ingredient in one curry was river snails; smoked pork and fiery condiments made with pounded raja morich (bhut jolokia/ghost peppers) abounded.

Everything was very good. I would single out for particular praise the stir-fried smoked pork, the pakora thongba (featuring besan dumplings in a sour soup) and the buff curry, featuring buffalo meat (I’d guess it would traditionally be beef in Manipur). The duck curry and the tharoi thongba (the river snails curry) were very tasty as well, but the duck was heavier on skin and bone than on meat (perhaps by design) and the river snails were a bit fiddly (though worth it). The eromba and atempa, two chutneys—one more like a potato side-dish, one dry—were both dynamite and both lethal. I highly recommend a glass of the sour atingba (rice beer) to combat the heat. The one familiar dish was the ooti, which turned out to be similar to channa dal with green peas added. To close we shared an order of their chakhao kheer, a rice pudding/kheer made with black rice and rendered rather unusual—to this Bengali and North Indian palate—by the addition of edible camphor; I really liked it but it divided the group.

Take a look at the restaurant and the food in the slideshow below and scroll down for thoughts on service, cost etc. 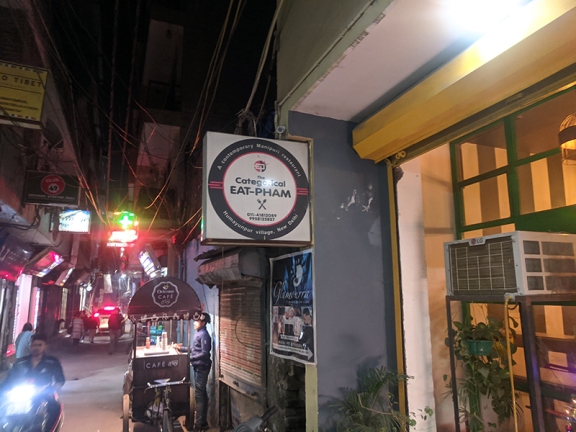 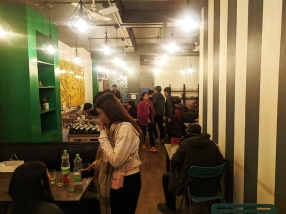 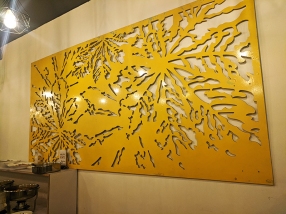 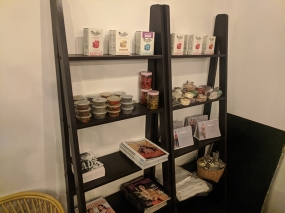 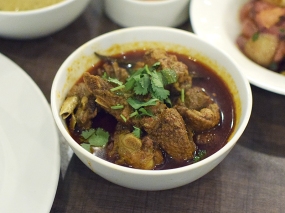 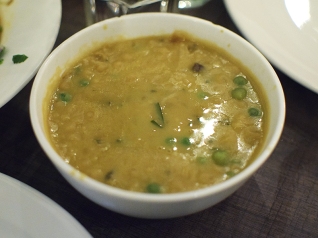 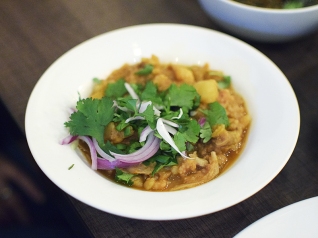 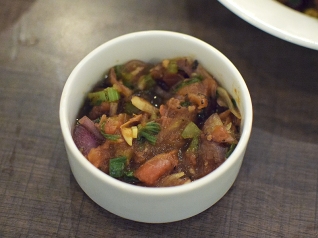 All of this food plus three rice beers and a few bottles of water came to about Rs. 2500 with tip or just about $35. So $7/head for a lot of tasty food. This is, of course, very cheap in dollars but it’s not very expensive in Delhi either.

Our server was friendly and helpful. The atmosphere in the restaurant was very nice—some solo diners eating a quick meal on the way from work to home, some groups of friends starting their night. Not being from Manipur or having any prior experience of Manipuri food, I cannot opine on how close the dishes at this meal were to Manipuri standards (and it didn’t seem like they were trying to put twists on anything) but I can say that we all enjoyed the meal a lot, fiddly snails and chewy duck and all. I can see how for Manipuri people far away from home a restaurant like this would feel like a slice of home. But even if you are not from Manipur I would highly recommend a visit to Eat Pham; if not for anything else, to get a sense of an India very different from the one currently being rammed down everyone’s throats.