Sikkim, which became an Indian state in 1975, is counted as one of the eight northeastern states of the country. It is not, however, contiguous with the other seven northeastern states, being separated geographically from them by parts of northern West Bengal that lie further east than Sikkim. The population is of largely Nepali origin with the Lepchas and Bhutias among the other major indigenous ethnic groups (there are also Bengali and Marwari communities). My family lived in northern West Bengal in the early 1980s and I went to boarding school in Darjeeling in the mid-1980s. We went on many hiking trips to Sikkim and I had Sikkimese friends in school. Sikkimese food is, therefore, not largely a blank space in my culinary map as is the case with most of the other northeastern states (the other exception is Assam). Unlike Manipur—whose food I know only from our recent meal at Eat Pham—or Nagaland—whose food I know only from meals at Dzükou and Hornbill—I’ve eaten a fair bit of Sikkimese food in my adolescence, though not a whole lot of it since then. As on this trip to Delhi we were trying to eat a greater regional variety of food than we usually end up doing, I was pleased to learn that there is a well-regarded Sikkimese restaurant in Greater Kailash-1: Nimtho. We ate lunch there in between our dinners at Eat Pham and Hornbill. Herewith some details. END_OF_DOCUMENT_TOKEN_TO_BE_REPLACED 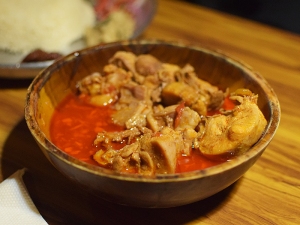 Back to Humayunpur, back to another restaurant featuring the food of a North Eastern state. On Sunday I reviewed a dinner at the Manipuri restaurant, Eat Pham—a dinner we really enjoyed. A few days later we went back to the same market and embarked on a very similar hunt for another restaurant, Hornbill, which serves food from Nagaland. While our Eat Pham outing was our first encounter with Manipuri food, Hornbill was our second Naga meal in Delhi in as many trips as a family. We were last here all together in January 2016 (I’ve come on my own in between a few times) and on that trip one of our favourite meals was at Dzükou in Hauz Khas. Dzükou has since closed in that location. I’ve heard tell it has reopened in Vasant Kunj, but we didn’t need to go quite that far from Noida when there are a number of Naga places in Humayunpur and environs, and Hornbill particularly well-reviewed among them. We descended on them with the same friends we’d eaten at Dzükou with four years ago. Here is what we found after we found the restaurant. END_OF_DOCUMENT_TOKEN_TO_BE_REPLACED

We’re coming to the end of our stay in Delhi on this trip (we’ve been here for almost two weeks). Coming “home” to Delhi has become progressively alienating in the 26+ years since I left for graduate school in the US. For the first  few years it was like falling back easily into a mother tongue you don’t speak in your day-to-day life. After that as the Indian economy liberalized and the mediascape and urban landscape began to transform radically, trips “home” began to feel increasingly foreign: familiar roads and places became harder to map, my old points of reference were no longer reliable. And, of course, as my life in the US—work, marriage, children—became more established the question of which was “home” became more blurred. This is, of course, a familiar immigrant story. Though there is a great deal of class privilege encoded in the fact that I have been able to be a regular visitor to India (for weeks at a time) ever since I left, I don’t want to claim that there’s anything exceptional about this sort of thing. But for me this trip has been different. END_OF_DOCUMENT_TOKEN_TO_BE_REPLACED

As I noted in one of my write-ups of meals from our last trip to Delhi a couple of years ago, perhaps the major shift in the food scene in Delhi over the last decade and more is the proliferation of restaurants serving a larger range of regional Indian cuisines. It’s a different world now than when I was at university in the late 1980s and then working in advertising in the early 1990s. Then the options were largely south Indian vegetarian and, starting in the early 1990s, a few places offering food from Kerala. (I am not, of course, counting Indian Chinese here as that stopped being a regional Indian cuisine a long time ago—it’s now a pan-Indian thing much like “Mughlai” food.) Now, there’s a lot available: a lot of Malayali restaurants, Parsi/Irani restaurants, Goan restaurants, Rajasthani restaurants, Bengali restaurants, even Bihari and Oriya restaurants. The most pleasing development though in many ways may be the growing number of restaurants serving food from the states of the North East.  END_OF_DOCUMENT_TOKEN_TO_BE_REPLACED